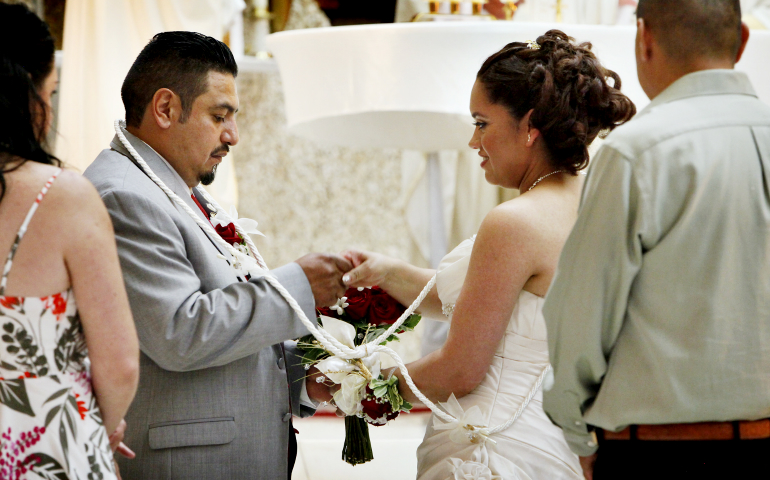 A bride and groom hold hands during a marriage convalidation Mass in 2016 at Immaculate Conception Church in Chicago. Couples married civilly take part in such services to receive the sacrament of matrimony. (CNS/Chicago Catholic/Karen Callaway)

There's a lot going on in "The Joy of Love" (Amoris Laetitia), the exhortation Pope Francis published last year after the two-part synod on the family, but, says theologian Julie Hanlon Rubio, the core of it is pretty simple.

That was Rubio's message on April 19 during a lecture on the papal exhortation at Dominican University in the Chicago suburb of River Forest.

Rubio, a professor of Christian ethics at St. Louis University and a member of the NCR board, noted that frequently in the church and in American society, there is a clear separation between "the family values people and the social justice people." This occurs in the way parish committees are set up, for example, and in the arrangement of academic disciplines, and in Catholic theology.

In talking about the two subjects as sides of the same coin, Francis is starting "a new kind of conversation," using "prophetic and homey language."

Unlike the mainstream modern culture, the pope doesn't see marriage and family as a refuge from the whirlwind of life. His is a vision, Rubio said, of "a couple holding hands and moving forward and outward" into engagement with others. He even quotes Uruguayan poet Mario Benedetti: "I love you because your hands/Work for justice ... We are much more than just two."

Throughout the 20th century, Catholic theologians debated the question of whether love was essential to marriage. Many thought not. "But Francis puts love at the center," noted Rubio, "and he uses words that couples use" to describe the pleasures and pains of sharing a life together.

Not only that, but the pope "talks about what the church has done wrong about marriage. He says we've made mistakes; we've focused too much on procreation."

Francis reframes the conversation about marriage and family to recognize the delight ("joy") of physical love and emotional connection. He uses, Rubio said, "positive language about sex. John Paul II could be positive as well, but not as down-to-earth."

Yet, Francis is deeply rooted in the traditional value of marriage as a lifelong commitment, though he expresses his understanding in what might be called the language of lovers.

"He says there's something about the nature of love that points to forever," Rubio noted. "He says it's what we want from someone when they say, 'I love you,' and what they want from us. But, to get that, you have to cultivate that love. He says you have to show up for your spouse."

For instance, in "The Joy of Love," which is also commonly known by its Latin title, Amoris Laetitia, Francis writes:

Marital joy can be experienced even amid sorrow; it involves accepting that marriage is an inevitable mixture of enjoyment and struggles, tensions and repose, pain and relief, satisfaction and longings, annoyances and pleasures.

Yet, while holding up this ideal of marriage, Francis is also reaching out to and seeking to "accompany" those who don't fit that ideal, such as divorced couples and single parents.

Surveys of Catholics before the synod on the family that led to the pope's exhortation showed misunderstandings about and disagreements with church teaching. Rubio said, "The synod focus was — how do we accompany people?"

The result: debates among the bishops that, while conducted in private, were routinely discussed in public.

She noted that this was unsettling for many of the prelates, "but, in his final speech, Francis said: This has been great — and I've been so happy. We've been on this journey together. He said it would have been disappointing not to have disagreed like this. He said this is the church."

In "The Joy of Love," he doesn't try to settle the tension between holding up the ideal and extending the arm and hug of mercy. Rubio pointed out that Francis gave to parishes the job of finding better ways to welcome and accompany those who find themselves on the margins of the church.

"There's no blueprint," she said.

Although Francis writes with beauty, simplicity, gusto and accessibility, he is wrestling in "The Joy of Love" with complex theological ideas and relationships in ways that are refreshingly and, for some, disturbingly innovative.

For the past year, Rubio has taken on the role of translating the document into simpler and more direct language for the wider public. She published a lengthy analysis in NCR within two weeks of its publication, and her talk at Dominican University was her third lecture on the exhortation. In addition, in February, she published a 96-page commentary on the document called Reading, Praying, Living Pope Francis's The Joy of Love: A Faith Formation Guide (Liturgical Press).

"It's just so wonderful to have this kind of document with which to work," Rubio said in an interview. "It can open doors. I don't know many sources where marriage is spoken about to this kind of depth."

While she acknowledges that the exhortation has its imperfections, Rubio sees it as a compelling vision of real marriage, contrasting sharply with the widely held fantasy of "the one." That dream is destructive because when the going gets tough, a spouse can decide that it must be the fault of the other and leave to find the real "one" who can make life perfect.

Francis, on the other hand, warns that life isn't perfect.

"And that loving someone a lifetime is loving justice."

[Patrick T. Reardon is the author of eight books, including the poetry collection Requiem for David and Faith Stripped to Its Essence, a literary-religious analysis of Shusaku Endo's novel Silence.]