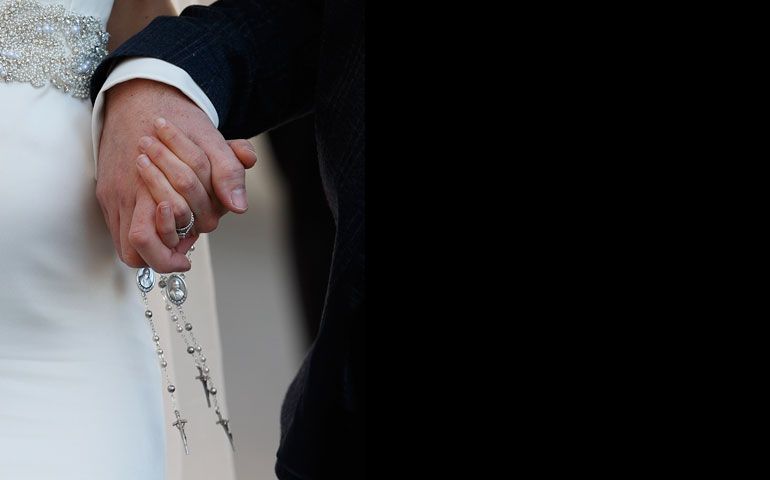 A newly married couple hold rosaries in their hands as they leave Pope Francis' general audience in St. Peter's Square at the Vatican Feb. 24. (CNS/Paul Haring)
This article appears in the Amoris Laetitia feature series. View the full series.

From both the right and the left, commentators are mourning the lost opportunity of Amoris Laetitia, claiming that it adds little to the conversation that we did not already know. While it does not meet the expectations of either group, it articulates a theology of marriage for a world longing for love yet suspicious of traditional claims about marriage.

For those on the right, Pope Francis says far too little about the normativity of the two-parent heterosexual family, the threat of same-sex marriage, the immorality of contraception, and the unacceptability of second marriage. Groups of traditionalists lobbied the pope during the synods of 2014 and 2015, asking for clarity.

According to New York Times columnist Ross Douthat, the pope did not contradict doctrine, but in proposing official teachings with a "lack of confidence," "in tones laced with self-effacement, self-critique," he has brokered a truce but left the church weaker.

Some on the left criticize the document for its limited, exclusive vision of love. According to feminist theologian Mary Hunt, writing for Religion Dispatches, "There is only one ideal -- heteronormative uncontracepted sex in monogamous marriage -- in relation to which everything else is derivative, lesser, lacking, and/or forbidden."

The exclusion of same-sex couples and judgment against contraception, while not surprising and only briefly discussed, are disappointing. Many hoped that a pope who has sounded a different tone about these issues would at least move in a better direction in this letter. He does not.

Yet, the decentering of sexual ethics that has marked this papacy remains in force. While progressive Catholics will rightly continue to insist on greater inclusion and rethinking on both issues, it is important to notice what is not in the document.

Unlike in the U.S. Conference of Catholic Bishops' 2010 pastoral letter, "Marriage: Love and Life in the Divine Plan," we do not see same-sex marriage identified as a threat to marriage. Whereas the U.S. bishops have made fighting against same-sex marriage the central plank of their defense of marriage, Francis has other concerns.

Unlike in Pope John Paul II's 1981 post-synodal apostolic exhortation, Familiaris Consortio, Francis' Amoris Laetitia does not say that those who use contraception "degrade" and "manipulate" human sexuality, themselves and their partners. Natural family planning is not presented as an essential to Christian marriage.

The central concern of Amoris Laetitia is providing a credible theology of marriage. Before the world's bishops gathered at the 2014 and 2015 synods on the family, they learned from surveys given to lay Catholics that, for many, the teachings on marriage and family were obscure and unconvincing.

With a humility that is uncommon in papal documents, Francis acknowledges the church's failure to communicate, saying, "At times we have also proposed a far too abstract and almost artificial theological ideal of marriage, far removed from the concrete situations and practical possibilities of real families. This excessive idealization, especially when we have failed to inspire trust in God's grace, has not helped to make marriage more desirable and attractive, but quite the opposite."

Instead, Francis says, he wants to offer a vision of marriage "as a dynamic path to personal development and fulfillment." He seeks to follow Jesus in offering a "demanding ideal" with sensitivity to the "frailty" of human beings.

While juxtaposing the Christian ideal to certain problematic cultural currents, the pope avoids simplistic generalizations about individualism and consumerism. Still, he worries about a "culture of the ephemeral" in which people move from relationship to relationship, fearing long-term commitment that will necessarily limit their choices. He associates the drive for independence with a difficulty in sustaining community that ultimately leaves many people lonely.

Francis is also aware that economic forces make marriage more difficult to choose, both for the poor, who "lack possibilities for a future," and for the privileged, who have too many other options. The same forces make marriage more difficult to sustain. He expresses particular concern for families destabilized or torn apart by migration and for those living in extreme poverty.

After describing the many different challenges families face, the pope concludes by saying, "There is no stereotype of the ideal family, but rather a challenging mosaic made up of many different realities, with all their joys, hopes and problems."

It is from the ground of the diverse experiences of families that the pope seeks to reformulate the Catholic vision.

In the portions of the document that are uniquely his, Francis seeks to communicate the beauty of lifelong marriage. Very close to the surface of the document is an acute awareness of just how suspicious many are of this ideal.

Central to his vision is fidelity, which is grounded in "the experience of belonging completely to another person" and the challenge of "supporting one another, growing old together." Though seemingly at odds with passionate love, Francis argues that love itself demands fidelity.

There is no naive romanticism of "the one," no sense that one person completes me or makes me whole.

The pope insists that each person retains his or her own autonomy and does not see the other as "his or her own." He quotes German theologian Dietrich Bonhoeffer, who argues that each spouse must be realistic about what the other person can give, not "expecting from that person something which is proper to the love of God alone," the pope says.

Francis seeks to establish not so much that procreation is a requirement of marriage but that love is inherently generous. Marriage is about more than two. Families are not "a refuge from society." Rather, their commitment to others enhances their love.

Francis quotes from the Uruguayan poet Mario Benedetti's poem "Te Quiero," which reads in part, "I love you, it is because you are/ My love, my companion and my all,/ And on the street, side by side,/ We are much more than just two."

Aware of how people can hurt and disappoint each other, the pope returns again and again to the theme of forgiveness. Martin Luther King Jr.'s admonition to love one's enemies because even the one "who hates you the most has some good in him" is appropriated for marriage, as the pope calls spouses to see God in their imperfect spouses, no matter what they have done.

The practice of forgiveness is one piece of a larger point: Love is joyful but the joy "needs to be cultivated." Love is what we were made for, what we long for, and what brings us the most happiness, but it also will inevitably mean "suffering and struggling together" and "a shared commitment to deeper growth in love."

This is no watered-down message, nor is it solely a defense of a patriarchal, heteronormative model. It is not as inclusive as it ought to be, but read expansively, it is a demanding and compelling vision of love.

[Julie Hanlon Rubio is a professor of Christian ethics at St. Louis University. Her writing and teaching focuses on marriage, family, sex and gender. She is an NCR board member.]