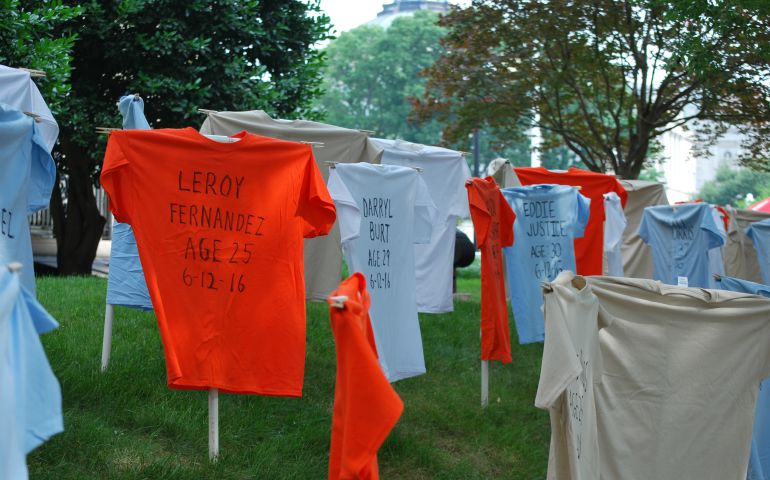 A traveling exhibit of T-shirts outside the United Methodist building near the U.S. Capitol in Washington, D.C., commemorates the 58 victims of the Pulse Nightclub and Mother Emanuel church shootings. The display is part of a partnership between Faiths United to Prevent Gun Violence and Heeding God's Call, two faith-based movements to end gun violence. (Courtesy of the General Board of Church and Society of the United Methodist Church)

In a week already marked by two anniversaries of mass shootings, a third incident was added to the growing list of America's gun violence when a man opened fire on a congressional baseball team in Alexandria, Virginia, early morning, June 14. The shooting, on a field just outside Washington, D.C., injured four people, including Rep. Steve Scalise (R-LA). The gunman was killed.

A coalition of 55 religious groups, Faiths United to Prevent Gun Violence, was already commemorating the one-year anniversary of the Pulse Nightclub shooting in Orlando on June 12 and the two-year anniversary of the Emanuel African Methodist Episcopal Church (Mother Emanuel) shooting in Charleston June 17 when the latest incident occurred. A planned June 14 press conference outside the United Methodist Church building, just a block from the Capitol, was cancelled, but a traveling exhibit, organized by the coalition and Heeding God's Call, of 58 T-shirts with the names, ages and dates of death for the victims of the two shootings — called A Memorial to the Lost — will be on display there through June 23.

The Faiths United coalition was originally constituted in 2011 and last year was reorganized under the umbrella of the Center for American Progress, which provides logistical support to the group. Faiths United advocates for universal background checks and a ban on high-capacity assault weapons and wants gun trafficking be made a federal crime. The coalition engages in advocacy events and lobby visits on Capitol Hill to move forward its agenda.

Members include the General Board of Church and Society of the United Methodist Church, the Catholic Health Association of the United States, the Franciscan Action Network, the Conference of Major Superiors of Men, and a host of other Christian, Jewish and Muslim groups.

"I think it's pretty clear in the conscience of most Catholics in the United States that ending gun violence is part of a wider pro-life agenda," Christopher Hale, executive director of Catholics in Alliance for the Common Good, a coalition member, told NCR. "The Second Amendment is a political right, not a divine right. We respect it but also others that protect the quality and well-being of the life of the individual."

Hale commended Cardinals Blase Cupich of Chicago and Joseph Tobin of Newark for their moral leadership on gun violence but noted that there is room for improvement within the church on the issue, specifically in the allocation of resources meant to reduce it.

"Lay groups can push this forward, but the bishops' conference and ecclesial leadership need to put their resources and moral authority behind it," he said. "Everyone knows the Catholic Church defends the rights of the unborn, the dignity of immigrants and the dignity of work. People should know intrinsically that the church is committed to ending gun violence."

Members of the coalition were hesitant to address the congressional shooting directly, for fear of politicizing an unfolding tragedy.

"We want to weigh in a spiritually sensitive way," said LaShawn Warren, vice president of Center for American Progress' Faith and Progressive Policy Initiative, under which Faiths United falls. Calling it "a perverse logic" that more guns are often suggested as the answer to gun violence, Warren, who holds a degree from the Yale Divinity School, said, "The faith community is saying, 'Look, we are the ones who are called in to counsel family members when someone is lost, and it's a moral outrage.' "

It was not lost on coalition members that this week of commemorations and new shootings, including another on June 14 at a UPS facility in San Francisco in which four people were killed, occurred as Republicans in the House are pushing forward a provision of the Sportsmen's Heritage and Recreational Enhancement Act, which expands access for hunting, fishing and recreational shooting, and also the Hearing Protection Act, which would relax restrictions against firearms silencers that have been in place for almost a century.*

Another bill currently in subcommittee, the Concealed Carry Reciprocity Act of 2017 would override existing state laws concerning who may carry concealed weapons in the individual states.

Sr. Carol Keehan, president and CEO of Catholic Health Association, put the issue in the context of a broader respect for life, which she told NCR is lacking in our culture.

"Once you don't have respect for human life, everything is at risk. As healthcare people, we see the tragedies of this over and over and over again," she said.

Patrick Carolan, executive director of the Franciscan Action Network, lamented that Catholics in Congress and many of those in the pews do not take more of a stand on the issue of gun violence.

"Peacekeeping and gun violence are part of the campaign on a consistent ethic of life, to promote nonviolence everywhere and to respect all life," Carolan said. "But it's hard to claim you are right-to-life when children are being killed by gun violence and you're doing nothing about it."

For the United Methodist Church, its membership in Faiths United is in keeping with its strong stance on gun violence, part of its larger theological vision for peace and justice, based on Micah 4:1-4, of turning swords into ploughshares and spears into pruning hooks.

"For us, we recognize that gun violence is part of a cultural, societal issue," said Jeania Ree Moore, director of civil and human rights at the General Board of Church and Society of The United Methodist Church. She cited a number of gun violence statistics, including that two-thirds of gun deaths are suicides, and about 93 people — of which about 7 are children — are killed by guns every day, numbers confirmed by the Brady Campaign to Prevent Gun Violence.

When asked whether the congressional shooting might change the dynamic in Washington, Warren was reflective.

"Unfortunately, members of Congress have been shot before," she said. "It's terrible that this has happened, and the reality is we are still where we are legislatively. I don't know if the conversation will move along because of the personal nature of this, but we will continue to push for it to be moved along."

*This article has been updated with correct information about the bills in Congress.