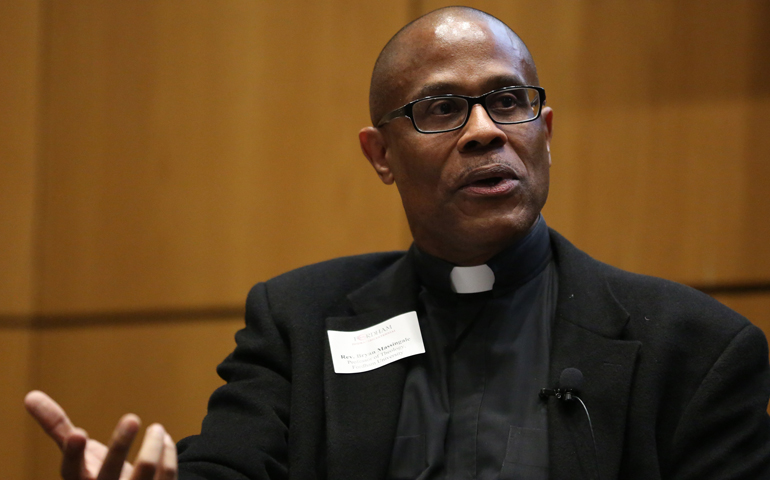 Since the election and first turbulent months of the Donald Trump presidency, Fr. Bryan Massingale, professor of theological and social ethics at Fordham University, hasn't hesitated to admit that he's uneasy.

Where is our nation headed? What is the future for minorities and people of color in a country led by a president who often demeaned or dismissed them during his presidential campaign?

At a March 22 talk at St. Mary's College in Notre Dame, Indiana, Massingale told his audience that America has a great deal of soul-searching to do about racism. But, he quickly added that, in a different way, he has been forced to do the same.

Soon after the 2016 election, Massingale was a panelist at an event focused on what the future might mean for blacks, Hispanics, immigrants and the poor in America. Near the end of the event, the moderator asked, "What would a racially just society look like?"

"I didn't know!" Massingale said. He was dumbfounded that as a scholar who'd been speaking and writing about racial justice for decades, he had nothing to say. "It was easier to say what I was against. It was easier to diagnose the things that afflict us."

Propelled by a question he couldn't answer, Massingale turned back to the groundbreaking writing of civil rights leader Rev. Martin Luther King. That return to King's work was deeply rewarding, the priest said, as he rediscovered King's analysis of a racially divided America in the 1950s and '60s.

King had slowly realized that enacting legislation and challenging social practices wouldn't really end racial injustice. The answer, King ultimately saw, was nothing less than a transformation of society. Racism wasn't just a set of social behaviors and attitudes. King believed that racism was a "soul sickness" in America's soul.

King's insights are particularly invaluable now, the Fordham ethicist claimed. According to Massingale, too many Americans still subscribe to a simplistic, truncated and erroneous version of African-American history:

Black people came to the country as slaves and that was bad. Lincoln came and freed the slaves, but things were still bad. Martin Luther King came and changed things. We elected Barack Obama and now live in a post-racial society! And that's African-American history in 10 seconds or less.

Massingale's black "history" lesson, recited in a singsong voice, made the audience laugh. But, Massingale insisted that he is often confronted by people who think his unrelenting activism for racial justice is time wasted. "We already won the battle," some argue.

"The deepest reason why I have chosen to be a Catholic ethicist who focuses on racial issues stems from my understanding of racism," he said. Although it can be seen as a political issue, sociological phenomenon or cultural divide, it's King's view of racism as a "soul sickness" that resonates most deeply with him.

Massingale also said he regrets that Catholicism, unlike Judaism, doesn't treat racism as a social sin, a sin for which the community bears some responsibility. In the Catholic worldview, issues of morality tend to be limited to issues of personal morality. "In the Jewish culture," he explained, "they gather for Yom Kippur, a Day of Atonement. They gather to say, 'as a community, we have failed.' "

Nonetheless, Massingale said that in 1999, Pope John Paul II, during his last pastoral visit to the United States, clearly named racism as a national sin. He called it a plague and one of the most persistent and destructive evils of the nation. In fact, the pope named racism as a "pro-life" issue.

However, as Massingale recalled, a monsignor commentating on Eternal Word Television Network, covering the pope's visit, quickly dismissed the pope's assessment of racial sin in America. "The monsignor told his audience, 'This goes to show how ill-served the Holy Father is by his advisors because racism is no longer a pressing issue in the United States.' "

As members of Massingale's audience gasped with disbelief, he offered still one more way of understanding the sad and sinful reality of racism.

"Racism in America has become a spiritual cataract that limits our vision, and whom we do and do not notice," he said. "Racism is revealed today in a lack of empathy and a profound indifference. It's a pervasive lack of concern and social callousness in a majority of society to the horrors and scandals in our midst."