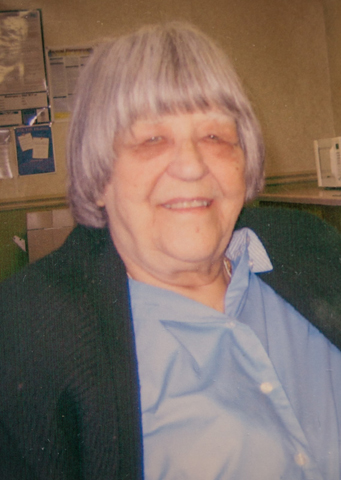 Anna Kurzweil donated $2 million to the Jesuits upon her death in September 2012. (Religion News Service/Sally Morrow/family of Anna Kurzweil)

Even people who knew Anna Kurzweil well wouldn’t have guessed she was a millionaire.

She grew up on a farm outside of Kansas City, the youngest of eight children, and entered the convent for a few years but spent most of her life as a schoolteacher. She earned less than $20,000 a year, cared for her elderly mother and eventually retired -- on a pension of less than $1,000 a month. She died in 2012, just shy of her 101st birthday.

Kurzweil was "just a plain, ordinary person," Ina Jane Bryan, who worked at the local bank, said recently of the customer who patronized what was then called Farmers Bank on Main Street in Grandview, Mo.

Kurzweil never married, had no children and lived simply and unpretentiously -- she wore modest clothing and drove an old car -- splurging only on travel abroad.

So when it emerged that the teacher had left a bequest of nearly $2 million to the local province of the Jesuits, nobody could believe it -- not her neighborhood acquaintances, not the Jesuits, not even her surviving relatives.

“Even the bank wanted to know how she got the money,” John Van De Vyvere, the trustee on his aunt’s estate, said in an article in the quarterly newsletter of the Jesuits’ Central and Southern Province, which first reported news of the bequest last fall. “They were surprised a schoolteacher had that much money.”

Jesuit Fr. Luke Byrne, a retired priest who knew Kurzweil in the 1970s while serving as pastor at her neighborhood parish, St. Francis of Xavier in Kansas City, admitted he was taken aback when he heard about the gift to his order.

“Well, that is something else!” Byrne recalled thinking at the time.

“She didn’t come across as a woman who wanted to be treated special, she wasn’t thinking of any special recognition for what she was doing or would in the future,” he told RNS.

Some of Kurzweil’s relatives were astonished by the extent of her estate, though they weren’t completely surprised that this independent-minded woman did what she wanted with it.

“She was a jolly person -- kind of strong-headed. She had to have things pretty much her way. She didn’t care to hear anything else,” Van de Vyvere said in an interview with RNS.

Indeed, Kurzweil’s surprising bequest revealed not just an unknown fortune but also a remarkable life that is a tale as rich as her financial legacy.

'All things ended. I suffered greatly'

According to her obituary -- which she wrote herself -- Kurzweil attended school in Alaska and Europe, and she spent six weeks working at a leper colony in New Guinea during the summer of 1972. She traveled around the world -- went to Europe, Egypt, Australia, and the Holy Land multiple times.

She also worked at Pratt & Whitney -- a plant that manufactured plane engines -- during World War II.

But her life’s work was education and helping others.

Besides teaching fourth- and fifth-graders for 25 years, she volunteered at a shelter every Saturday for 14 years and for more than a decade helped coordinate classes in an intensive writing therapy program popularized by the late Ira Progoff that aims to help writers get in touch with their true self.

Yet it was Kurzweil’s own inner life, and deep sense of spiritual longing, that animated her -- and only emerged in the reams of diaries, poems and other writings discovered after her death.

It is Kurzweil’s poetry in particular that reveals a thoughtful person with a deep spirituality and devotion to God. She was a life member of the International Society of Poets and was elected into the International Poetry Hall of Fame Museum.

In an undated poem titled “My Balcony,” she wrote:

Sitting on my balcony,

Focusing on the beauty of nature,

Realizing all life is sacred,

Responding to the call of duty,

Knowing my peace is in His Will.

To be sure, her Catholic faith was the golden thread that ran through her life.

She sang in the church choir and, as she noted in her obituary, was a lifelong member of various parish clubs and sodalities even as she later grew fascinated by more esoteric fare like mandalas and the Enneagram. She also became a devotee of Anthony de Mello, an Indian Jesuit and psychotherapist known for his unconventional spiritual writings.

“I have a deep hunger for prayer, and my thinking on the spiritual life has changed drastically,” she wrote in an undated diary entry, according to the article in the Jesuit newsletter.

As a young woman in 1935, she apparently had her heart broken by a fellow teacher.

“It ended. All things ended. I suffered greatly,” she wrote in her journal many years later.

“Then,” she added, “I made my commitment to live for God.”

She seemed to finally fulfill that commitment 13 years later, joining the Sisters of Loretto, a teaching order, in 1948. She took the veil and a religious name, Sr. Frances Vincent Kurzweil, and professed first vows two years later.

But in 1954, before taking final vows, she had to leave the order to care for her aging mother, Bertha, who died in 1964. [Her father had died during the war, in 1944.] Kurzweil seemed torn between her loyalty to her mother and her love of religious life, and confessed in her diaries to her deep conflicts, but never shared that inner turmoil.

“It was a very private part of her life,” her niece, Linda Kurzweil of Freeman, Mo., told the Jesuit newsletter. “Maybe she had some regrets” about leaving the convent, she said.

The other mystery, of course, is how she managed to save all that money.

Relatives said she did inherit a small nest egg left after the family’s three farms were sold and divvied up among the children. Then, basically, she did it the old-fashioned way: saving and not wasting. “She had good investors. She saved her money -- wasn’t a big spender,” said Van de Vyvere.

She left just $5,000 to each of her nieces and nephews, but the Jesuits certainly appreciated her generosity.

“Ms. Kurzweil has exemplified the power of planned giving,” Fr. John Fitzpatrick, provincial assistant for advancement of the Society of Jesuits, Central and Southern province, wrote in a statement to RNS. He said her gift was “unrestricted,” which means the Jesuits can “apply this gift where it is most needed.”

When asked about possible reasons why Anna chose the Jesuits to benefit from such a generous gift, Van de Vyvere explained that when his aunt was taking care of her mother, the priests from Rockhurst University came every day give her mother Communion. Kurzweil did sell her house to Rockhurst for a dollar.

“It was a nice surprise that both she had the resources and that she wanted to give it to the Jesuits for their youth and ministry,” said Byrne, her longtime pastor. “She wanted to be a good teacher and do what she could for her students.”

Her legacy will certainly live on, thanks to her bequest -- as, perhaps, will curiosity about her own spiritual journey. It was one marked by hidden sadness that many can relate to, but also, it seems, faith in an ultimate happiness for which many also long.

As she wrote in a poem titled “Rabboni,” which Kurzweil had printed on her funeral program:

When I am dying, how glad I shall be,

That the lamp of my life, has been burned out for Thee!

That sorrow has darkened the pathway I trod,

That thorns, not roses, were strewn o’er the sod.