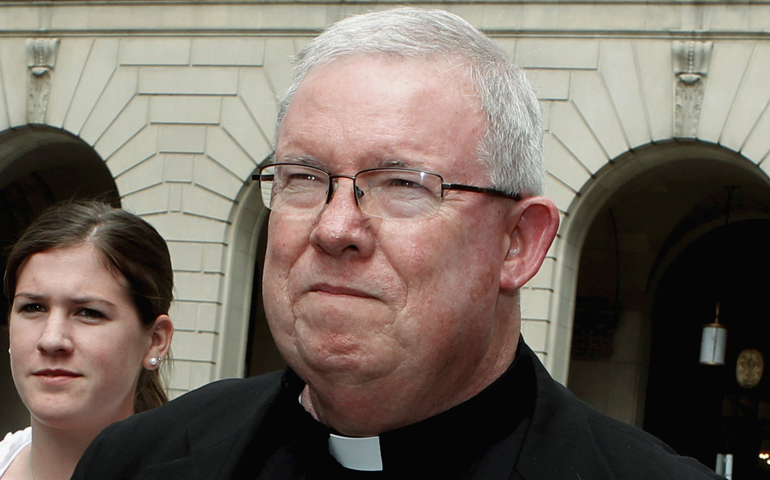 Lynn, 65, served as secretary for clergy for the Philadelphia archdiocese from 1992 to 2004. In June 2012 a jury found him guilty on one charge of child endangerment in relation to former priest Edward Avery.

Last week, the Pennsylvania Supreme Court rejected a petition to review a December appeals court ruling that vacated the conviction and ordered a new trial. The Supreme Court decision opened the door for Lynn's release Tuesday from Waymart State Prison. He is expected to live with family as he awaits a new trial.

At the bail hearing, Philadelphia District Attorney Seth Williams confirmed that his office will retry Lynn on the child endangerment charge.

"There is substantial evidence, including testimony from the defendant himself, to establish his guilt. A retrial is the right thing to do in the pursuit of justice," Williams said in a statement.

The district attorney reiterated that his office "takes the charges of institutional sexual abuse extremely seriously," and he will use "every available legal option at my disposal to prosecute pedophile priests and those who shield them to the fullest extent of the law."

The Associated Press reported Lynn will return to court Thursday, when a new trial date will be set.

The decision from the Pennsylvania Superior Court to vacate Lynn's conviction was based on a three-judge panel's determination that the trial court "abused its discretion" by allowing the prosecution to present as evidence 21 supplemental cases of sexual abuse, some as far back as 1948, during the original trial.

It marked the second time the Superior Court overturned the priest's guilty verdict and released him on bail. In December 2013, it ruled that the state's 1995 child endangerment law did not apply to Lynn, who was in a supervisory role, and that a 2007 amendment that included supervisors could not be applied to him retroactively. The Supreme Court disagreed, and reinstated his conviction the following April.

Before his release Tuesday, Lynn had served 33 months of his three-to-six-year sentence, along with 18 months under house arrest. He was expected to be granted parole in October.

Thomas Bergstrom, Lynn's lawyer, told the Associated Press that they are "prepared to try a fair trial any day." He added that should the priest be convicted again, the sentence would be limited to completing the three months remaining on the minimum three-year sentence.

At the time of Lynn's original trial, his conviction was hailed as a landmark case in the U.S. clergy sex abuse scandal, but in the years since, appeals rulings and credibility concerns about a key witness has muddied that classification and raised questions of the conviction's legality.

In a statement, Karen Polesir, Philadelphia area volunteer director of the Survivors Network of those Abused by Priests, said the group applauds the district attorney's vow to retry Lynn and expressed hope he would be convicted a second time in the retrial.

"For the morale of deeply suffering Philly area Catholics, victims, witnesses and whistleblowers, it's important to see the glass as 'half full' -- finally, a Catholic enabler -- a church official who put kids in harms' way -- has been punished. And he may be punished further," said Polesir, adding, "That should make many employers think again when they're tempted to hide known or suspected child sex crimes."