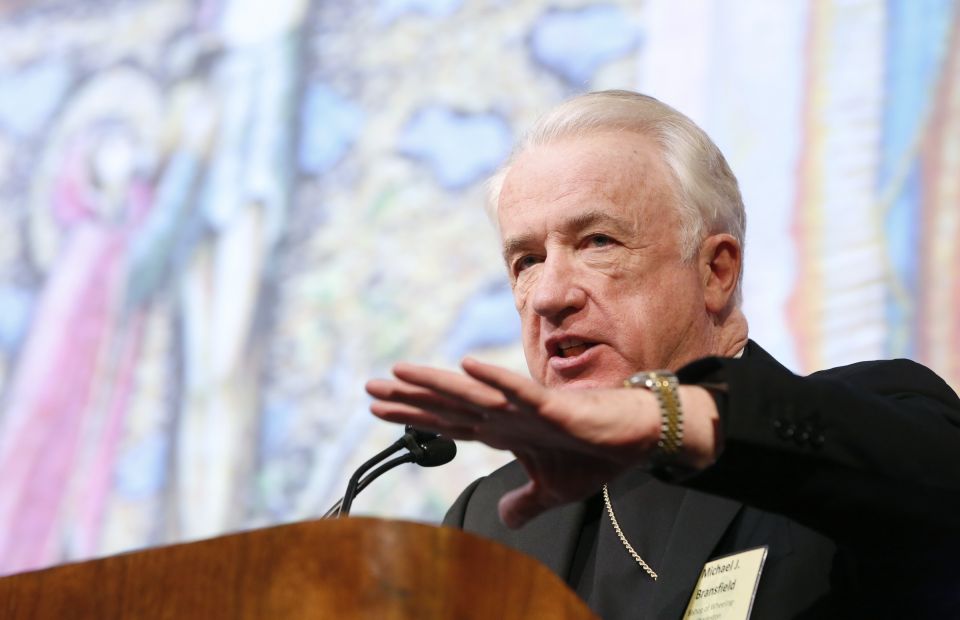 After last week's announcement that retired West Virginia Bishop Michael Bransfield had been formally disinvited from the Nov. 11-13 meeting of the U.S. Conference of Catholic Bishops, representatives of dioceses where other bishops have resigned or been removed for sexual misconduct or cover-up say they are unlikely to initiate similar action.

Three dioceses and archdioceses contacted by NCR — Milwaukee, Cheyenne and St. Paul-Minneapolis — indicated that the prelates in question already do not attend the bishops' twice-yearly meetings.

The only bishop convicted of the crime of failure to report a priest suspected of abuse to civil authorities, however, continues to show up.

Kansas City-St. Joseph Bishop Robert Finn reportedly was in the room this past June when the bishops passed the new "Protocol Regarding Available Non-Penal Restrictions on Bishops," under which Bransfield was disinvited.

Section 12 of that protocol allows the bishops' conference president, in consultation with the administrative committee, to disinvite any retired bishop "who resigned or was removed from his office due to sexual abuse of minors, sexual misconduct with adults, or grave negligence in office, or who subsequent to his resignation was found to have so acted or failed to act."

In the case of Bransfield, U.S. bishops' conference president Cardinal Daniel DiNardo made the decision to disinvite, after Bransfield's successor, Bishop Mark Brennan, requested it. Bransfield left his position in September 2018 under a cloud of allegations of sexual and financial misconduct.

NCR's repeated requests to the Kansas City-St. Joseph Diocese about whether current Bishop James Johnston would make a similar request about Finn were not answered.

After Finn's conviction in September 2012, a representative of the Survivors Network of those Abused by Priests (SNAP) asked Finn to stay away from the November meeting "as a sign of contrition." He did not.

The Los Angeles Archdiocese did not respond to NCR's requests about Auxiliary Bishop Alexander Salazar, who resigned last December after allegations of sexual misconduct with a minor dating back to the 1990s. Salazar has denied any misconduct or wrongdoing. 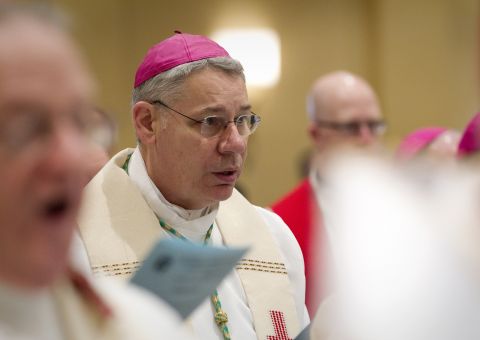 But the archdiocese did comment about retired Cardinal Roger Mahony, emphasizing that he "is a priest and bishop in good standing," according to an email to NCR from Adrian Alarcon, director of media relations for the L.A. archdiocese.

But the archdiocesan spokesperson said later "clarifications" indicate that Mahony has "full rights to celebrate the Holy Sacraments and minister to the faithful without restriction," according to her email.

"Canon Law dictates that Catholic bishops retire by age 75, which is what the Cardinal did," Alarcon wrote. "He was not removed in any capacity from ministry. He no longer had administrative duties or represented the Archdiocese publicly as Archbishop of Los Angeles because he is retired."

Alarcon declined to confirm whether the previous bar on Mahony's public ministry had been rescinded.

In three other dioceses, the current prelates responded to NCR by noting that the bishops in question no longer attend the meetings.

Archbishop John Nienstedt has not been attending the U.S. bishops' meetings for the last year, according to Tom Halden, director of communications for the St. Paul-Minneapolis Archdiocese.

Nienstedt faces allegations of sexual misconduct with adults as a priest in Detroit and Rome and as a bishop in New Ulm, Minnesota. Last December, St. Paul-Minneapolis Archbishop Bernard Hebda barred Nienstedt from public ministry in the archdiocese.

Cheyenne Bishop Steven Biegler said he did not intend to pursue such action against Bishop Joseph Hart, who is facing a Vatican trial for allegations that he sexually abused several minors years ago in both Wyoming and Kansas City, Missouri. Hart, who retired in 2001, has denied the allegations.

"Because Bishop Hart has not attended a bishop's conference general assembly since 2015, I believe taking such action is unnecessary," Biegler told NCR in an email.

Likewise, Milwaukee Archbishop Jerome Listecki does not plan to pursue a disinvitation for retired Archbishop Rembert Weakland, who in 2002 admitted to a previous affair with a man to whom he paid hush money from archdiocesan coffers. When the story broke, Weakland had already submitted his retirement letter to the pope.

"Archbishop Weakland is 92 years old and in frail health.  He hasn't attended a USCCB meeting in 18 years," Jerry Topczewski, Archbishop Listecki's chief of staff wrote to NCR in an email. "I don't think Archbishop Listecki would see the need to be concerned about his attendance at this point."

Accountability | After Bransfield disinvitation, will other bishops follow suit?