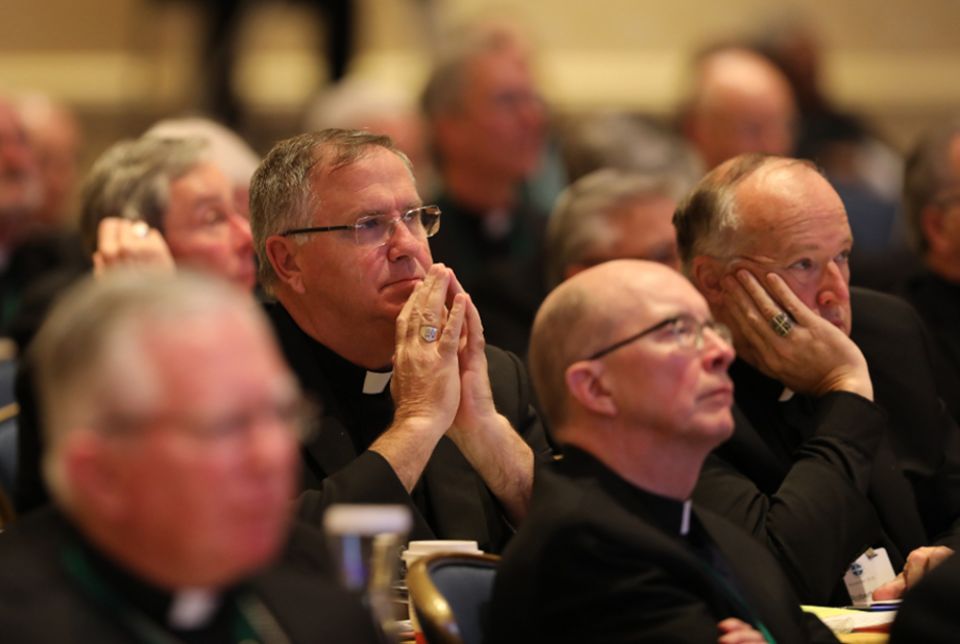 Bishops listen to a speaker Nov. 13 at the fall general assembly of the U.S. Conference of Catholic Bishops in Baltimore. (CNS/Bob Roller)

Baltimore — Some bishops have been more concerned about the reputation of the church than about victims of sexual abuse, indicating "clear corruption" and "a blind spot" that must be addressed, said Archbishop Paul Etienne of Anchorage, Alaska.

Etienne suggested a study — similar to the 2011 John Jay College "causes and context" study of priests who abused minors — to help understand "the episcopal attitude that was able to handle the abuse situation in such an inept way over the decades."

He also criticized bishops "who have gotten too accustomed to listening to lawyers over victims" and said that he and his brother bishops must remain vigilant against "the three Ps" — pride and the desire for privilege and power.

"That's a corruption of our life as shepherds that has to be called out and say 'No more. It's not tolerable,' " Etienne told NCR in an interview after the Nov. 13 morning session of the U.S.  Conference of Catholic Bishops meeting in Baltimore.

Later that day, Bishop Shawn McKnight of Jefferson City, Missouri, took to the floor and suggested a similar study of "the root causes of abuse of power" in the crisis.

Etienne also suggested that the body of bishops compose and make public a communication to Pope Francis about "how serious we are in our resolve to concretely take care of the crisis."

"We have to give some clear reassurance to people that we get it," the 59-year-old bishop said.

Etienne said he remains optimistic, seeing the four-day meeting as an opportunity for a "watershed moment" for church leaders "to speak very clearly to our own desire to take concrete action."

"I have high hopes that we as a body are up to the challenge that is before us," he said. "My prayer is that the bishops are paying attention to the voice of God through the Holy Spirit." 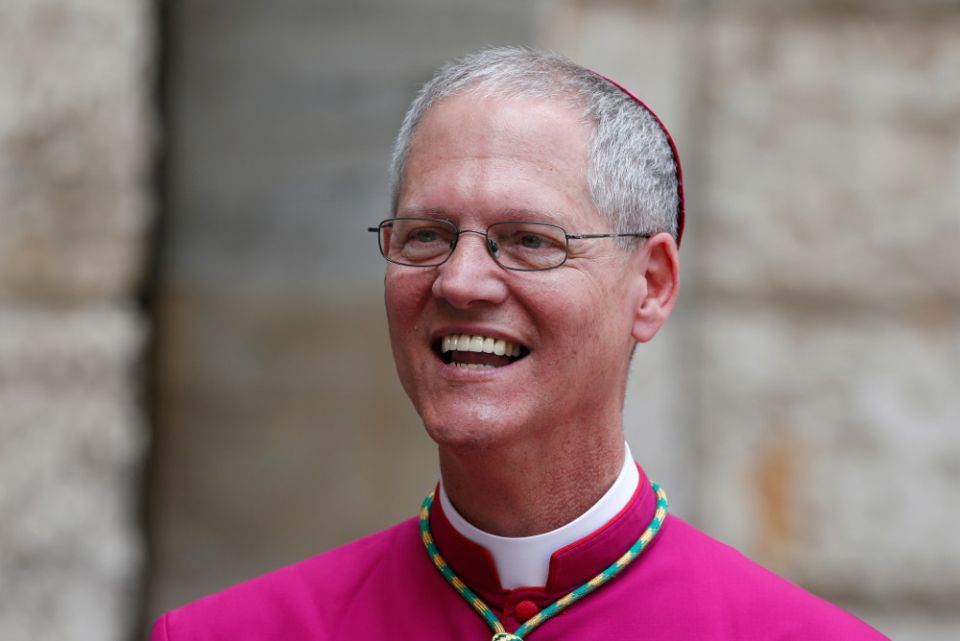 Archbishop Paul Etienne of Anchorage, Alaska, is pictured at the Pontifical North American College in Rome during a reception after a Vatican Mass marking the feast of Sts. Peter and Paul June 29. (CNS/Paul Haring)

"That's a corruption of our life as shepherds that has to be called out and say 'No more. It's not tolerable.' "

He said he was surprised but "not too alarmed" by the announcement at the start of the meeting Nov. 12 that the Vatican had asked U.S. bishops to delay their planned votes on protocols to address sexual abuse until after the Vatican summit of bishops' conference presidents in February.

Etienne supports the proposals for a third-party reporting system, a new code of conduct for bishops and a special commission to review complaints against bishops — although he said he was frustrated by the lack of broader consultation in their creation.

But he is hopeful that Pope Francis — whom he believes respects episcopal conferences — will bring new, concrete norms for consideration, if not promulgation, in February. "I think he's just asking us to respect that process, and I'm OK with that," he said.

Etienne also said he was heartened by the Nov. 13 announcement that Pope Francis had named Archbishop Charles Scicluna of Malta as adjunct secretary of the Congregation for the Doctrine of the Faith. Scicluna is considered by many the church's most respected abuse investigator.

Etienne acknowledged that many Catholics are frustrated with this latest iteration of the sex abuse crisis. "They're ready for all the cards to be put on the table," he said. "They're tired of dribble, dribble, dribble, one bomb going off after another."

But he cautioned that there are "no quick fixes."

The challenge for the bishops today, according to Etienne, is "to recognize where our own hearts as pastors, our own heart as a conference, need to be renewed in the heart of Christ."

Etienne was named to lead the Archdiocese of Anchorage after serving as bishop of Cheyenne, Wyoming, from 2009 to 2016. In Cheyenne, Etienne had restricted a predecessor bishop, Joseph Hart, from celebrating public liturgical services because of allegations of sexual abuse of minors that dated back to Hart's time as a priest in the Diocese of Kansas City-St. Joseph, Missouri.

Although a civil investigation of reports that Hart abused two boys in Wyoming found no evidence to support those allegations, new evidence this summer led current Cheyenne Bishop Steven Biegler to deem the allegations credible and requiring disciplinary action.

In August, after former Cardinal Theodore McCarrick stepped down from the College of Cardinals, Etienne put forth a seven-point plan that included an ad hoc committee of bishops, the creation of a National Review Board of bishops and lay people that reports directly to the Vatican and a timeline of 60 days for transparency to the wider church.

A version of this story appeared in the Nov 30-Dec 13, 2018 print issue under the headline: Archbishop Etienne: Bishops need to address 'blind spot' of sex abuse .

Confrontation time: Cardinal McCarrick and me in 2002