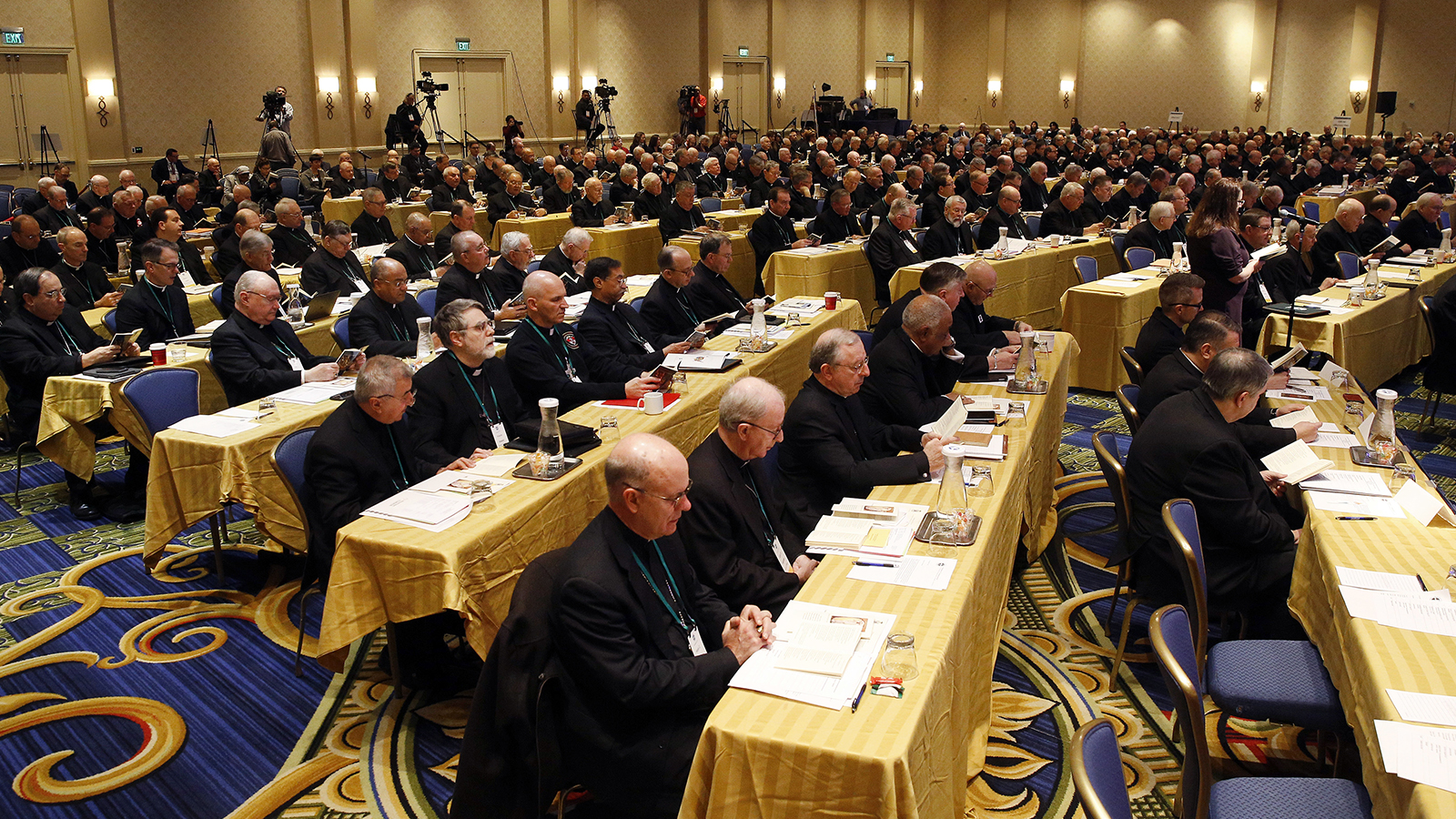 Members of the U.S. Conference of Catholic Bishops gather for the USCCB's annual fall meeting on Nov. 12, 2018, in Baltimore. (RNS/AP/Patrick Semansky)

As the U.S. bishops' meeting in Baltimore ends Nov. 15, the most newsworthy happening is still Monday's last-minute instruction from the Vatican to delay any vote on new procedures to sanction or otherwise deal with bishops who had either abused children or failed to remove abusive priests from ministry.

The instruction, in the form of a letter from the Congregation of Bishops in Rome, threw the gathering in Baltimore into chaos on its opening day.

The president of the U.S. Conference of Catholic Bishops (USCCB), Cardinal Daniel DiNardo of Galveston-Houston, openly expressed his disappointment with the Vatican's intervention. He and other bishops felt their house was burning down, and the Vatican was asking them to delay turning on the fire hoses.

Other bishops were secretly relieved. Some questioned the proposals for how to deal with abuse, which had been put together quickly in response to the Pennsylvania grand jury report and the scandal over ex-Cardinal Theodore McCarrick. Those who wanted the reforms to pass feared they would fail to get the necessary two-thirds vote for passage. Now both groups could buy time while blaming the Vatican for their inaction.

From any vantage, the Vatican intervention was extremely disappointing. It contradicts everything Francis has said about empowering bishops' conferences and decentralizing decision-making in the church. It was also a public-relations disaster for the pope, who is already losing the confidence of Catholics on the abuse issue, according to a September poll from the Pew Research Center: Only 31 percent of Catholics thought the pope was doing a good or excellent job handling the sex abuse scandal, down from 55 percent three years ago.

Though DiNardo didn't release the Vatican's letter, he and others explained that the Vatican worried that any procedures American bishops agreed on could pre-empt discussions at a meeting of the world's top bishops called by the pope for February. If the American procedures for dealing with bad bishops became a de facto template for the rest of the world, the congregation also sees the proposed actions as an infringement on its authority, arguing the conference has no authority over bishops.

The day was saved by Cardinal Blase Cupich, the archbishop of  Chicago, who suggested that the bishops continue discussing the proposals and treat them as recommendations that DiNardo, as USCCB president, could take to the February meeting.

There were three interrelated proposals on the agenda.

The first was a document titled "Standards of Episcopal Conduct," which each bishop would be asked to sign. Since the conference has no canonical authority over bishops, each bishop would have to voluntarily commit himself to following the standards. This voluntary system was an attempt to deal with Vatican objections that only the pope can investigate and judge a bishop.

The seven-page document also states that the 2002 "Charter for the Protection of Children and Young People" applies to bishops as well as priests and deacons. It also deals with sexual harassment and sexual misconduct with an adult by a bishop. It reiterates the bishops' commitment to the charter, including reporting abusive priests to police and removing them from ministry. It also commits the bishops to help in enforcing these norms on one another and to making sure that candidates for the episcopacy are truly suitable.

The second proposal called for a third-party reporting mechanism that would field accusations against bishops for failing to observe the above. Many organizations have such reporting mechanisms for dealing with misconduct by management. A third-party vendor would establish an "ethics hotline" for complaints.

These complaints would be referred to a special commission recommended in a third proposal. The commission of six laity and three clergy would review and investigate alleged violations of the Standards of Episcopal Conduct. The results would be sent to the nuncio, who represents the pope in the United States, since only the pope has the authority to punish bishops.

Some bishops also questioned the need for a special commission, saying it would be better to have the metropolitan archbishop handle investigations of bishops in his province using his archdiocesan review board. If the archbishop were accused, he would be investigated by the most senior bishop in the province. This, of course, has the same credibility problem as cops investigating cops.

Since the standards cite the 2002 charter, they could not be enforced retroactively. Thus, the review process could investigate only failure to protect children after 2002.

The McCarrick question was behind another document that described what to do about bishops who left their office due to sexual abuse, sexual misconduct or failure to protect children. It pointed out that a diocesan bishop could restrict the ministry of any retired bishop in his diocese.

It also suggested that the USCCB president could disinvite them from conference meetings. Robert Finn of Kansas City, James Timlin of Scranton and Cardinal Roger Mahony of Los Angeles, all of whom were condemned for their bad handling of abuse, were at this November meeting. Some bishops consider their presence an embarrassment.

DiNardo appointed an ad hoc task force of past presidents of the USCCB to finalize these proposals, including fleshing out two different options — one with a special commission and another using the metropolitans as the one to deal with accusations against a bishop. He also asked them to study national guidelines for the publication of names of clerics facing substantiated claims of abuse.

The calls for increased diligence raised questions for the bishops about the standard for putting a priest's name on a public list of offenders. Bishops fear publicizing unsubstantiated allegations but also fear accusations of cover-up. Some bishops have left it to their diocesan review boards to determine whose names are made public.

There was also discussion about what terms like "credible" and "substantiated" allegations mean. Bishop Shawn McKnight of Jefferson City said he defined "credible" as "more likely than not." He also established another category, "judged unfit for ministry by the bishop."

It was difficult to judge the sense of the assembly since no votes were taken on the proposals. There was general agreement that their credibility was at stake.

DiNardo and others reported that their people were especially upset by the McCarrick scandal. Bishop Liam Cary of Baker was applauded when he called on the conference to censure McCarrick, but no one made the motion.

Many bishops called for a full report on how McCarrick could be promoted in the church despite his sexual harassment of seminarians. The bishops considered a resolution encouraging the Holy See to release all the documentation regarding the allegations against McCarrick, but it failed by a vote of 83 to 137 after it was pointed out that the Holy See had already promised a report.

In any case, the Vatican and the dioceses where he served need to come clean.

On the other hand, some bishops, like Thomas Olmsted of Phoenix, continued to spout nonsense in blaming the abuse crisis on dissident theologians who objected to the church's ban on artificial contraception. Archbishop Salvatore Cordileone of San Francisco called for a study of the relationship between homosexuality and sexual abuse.

Bishops were the problem, not theologians and gays!

The delay puts more pressure on the February meeting in Rome called by the pope to deal with clerical abuse. Great hopes, perhaps unrealistic hopes, are now being placed on this meeting of episcopal conference presidents. Granted that the U.S. bishops are way ahead of most bishops of the world in dealing with abuse, this meeting may be another disappointment. Four days will not be enough time to deal with this crisis on a worldwide basis.

The slowness of the hierarchy in dealing with sexual abuse and episcopal accountability is discouraging. Hopefully, the time will be used to continue to study the issues and develop better policies and procedures. Meanwhile, the bishops and the Vatican need to recognize that the house is burning, and people are heading for the exit.