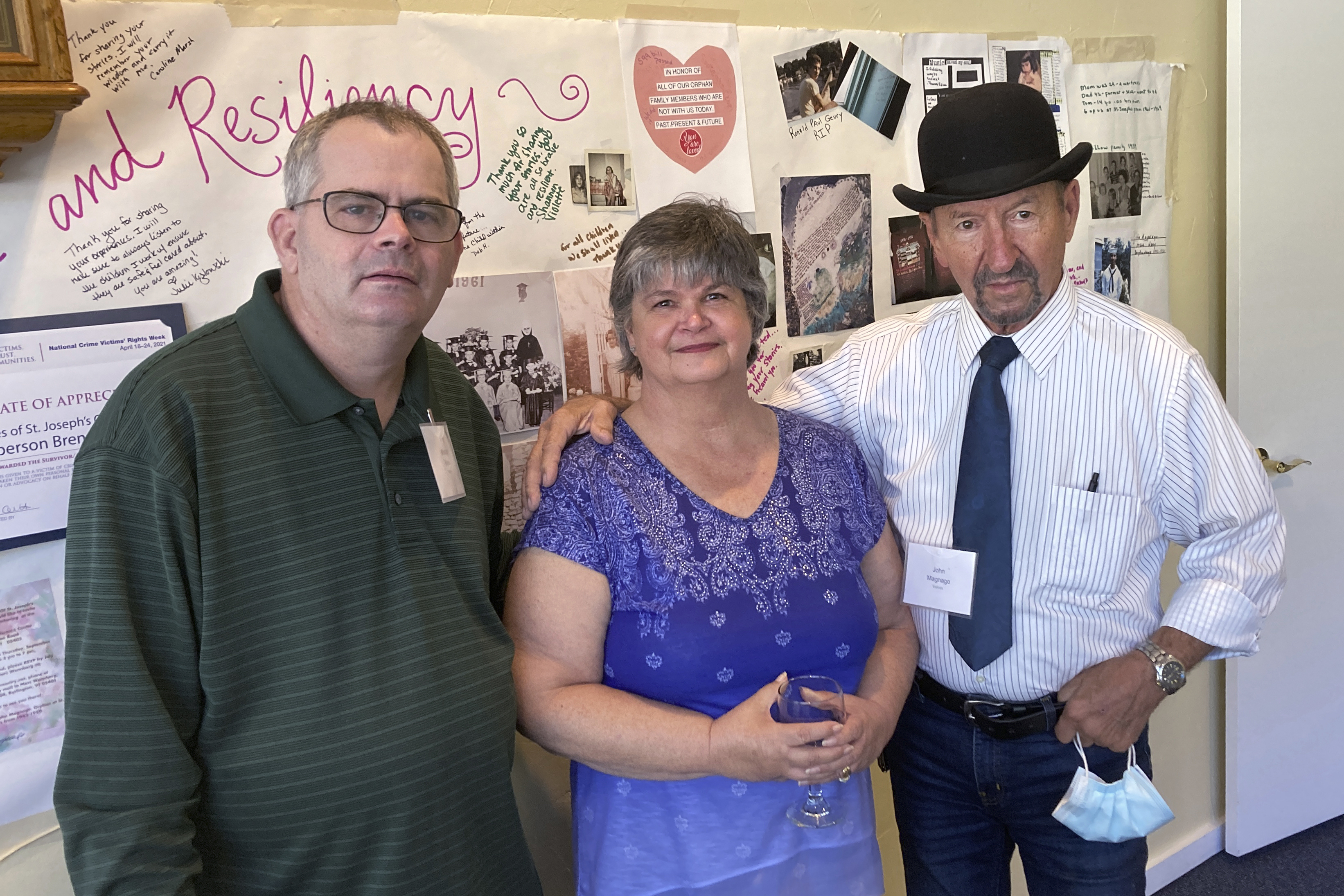 Michael Ryan, of Buckingham, Va., Brenda Hannon, of Williston, Vt. and John Magnago, of Miami, from left to right, pose in South Burlington, Vt., during a reunion of orphans from the St. Joseph's Orphanage in South Burlington, Vt., Thursday, Sept. 16, 2021. Some of the residents of the long-closed Vermont orphanage want the Catholic Church to pay for therapy as they continue to recover from what they felt was the abuse most of which occurred more than half a century ago. (AP Photo/Wilson Ring)

Some of the residents of a long-closed Vermont orphanage want the Catholic Church to pay for therapy as they continue to recover from what they described as abuse at the hands of the nuns and priests who were supposed to care for them.

The youngest members of the group that calls itself The Voices of St. Joseph’s Orphanage are in their late 50s. The oldest are pushing 80.

They held a meeting Thursday at a South Burlington hotel where they looked for ways to continue their recovery from the abuse that many say they suffered at the hands of the staff.

“It has been a long and oftentimes painful process to achieve some of the healing in our lives and to feel we are making a difference in our society,” said Brenda Hannon, 68, of Williston who lived at the orphanage from 1959 to 1968. “One of our greatest accomplishments is that we are now visible to all of you and we are now believed, as to what was done to us.”

During a news conference, some of the former residents called upon the church to do more to help them recover, including paying for their therapy. They said that in some cases the diocese has been willing to pay for therapy, but only with therapists of the diocese's choosing.

In a Thursday statement, the diocese said its representatives, including Bishop Christopher Coyne, have been meeting with former residents of St. Joseph’s Orphanage one-on-one and they will continue to do so.

“Each meeting is unique, each person’s story is unique, and the help we offer each former resident is specific to them," the statement said. “If the person feels they would be helped through counseling, we would work with them as needed.”

The group was formed in the aftermath of a 2018 report in Buzzfeed News about the Burlington orphanage that included allegations of a boy being thrown from a window to his death, a girl forced to slap herself 50 times and children being locked in an attic. There were also allegations of sexual abuse.

Over the years since its foundation the orphanage group held meetings where they shared stories and learned that many of them had similar experiences. They published an anthology of their experiences that was on sale at the meeting.

“Before I joined this group I never really thought about what happened, I buried everything down, the only thing that I knew was that I hurt and I didn't know quite why,” said Debi Gevry-Ellsworth, now of Pomfret, Connecticut, who arrived at the orphanage when she was 2 in 1964 and lived there until 1974.

She has a poem in the book entitled “Bricks and Mortar" that begins, “If bricks were scales and mortar flames, this monstrosity of a building would be a dragon burning children that wear no cross.”

The group also encouraged the Vermont Legislature to pass a law earlier this year to eliminate the statute of limitations in civil cases of childhood physical abuse.

When it opened in the mid-1850s the orphanage was operated by a Canadian religious order and then until its closure by Vermont Catholic Charities, a part of the Roman Catholic Diocese of Burlington.