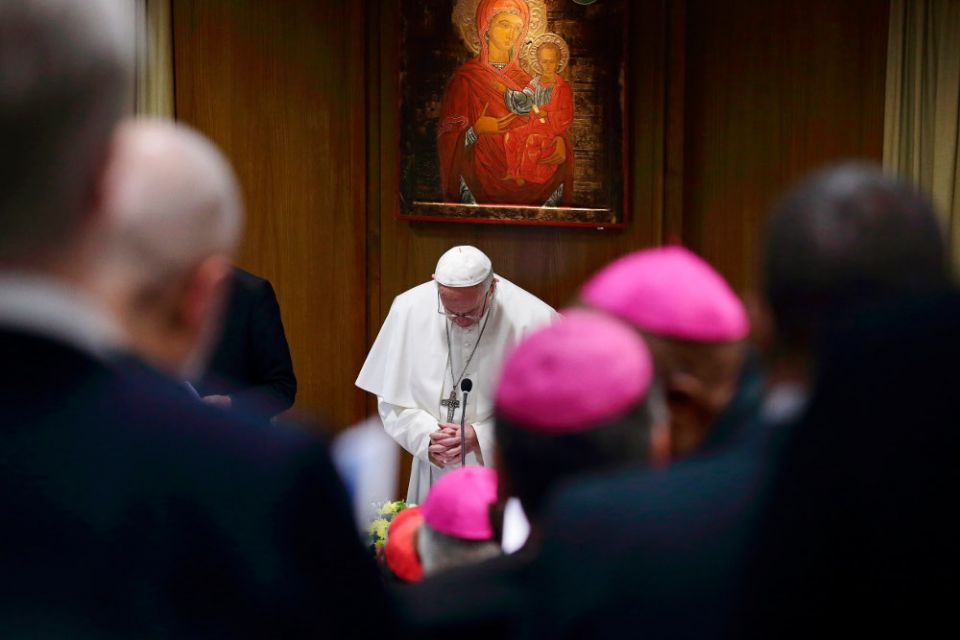 Pope Francis attends the opening session Feb. 21 of the meeting on the protection of minors in the church at the Vatican. (CNS/Evandro Inetti, pool)

Vatican City — The Australian archbishop taking part in Pope Francis' clergy sexual abuse summit has suggested the Vatican may need to create a new high-level office to streamline responses to victims and to examine the deep roots of the now decadeslong abuse scandals.

Brisbane Archbishop Mark Coleridge said such an office could be focused on ensuring "integrity in the church" and would be a way of signaling the seriousness of the problems facing the worldwide institution.

"This is a global emergency," he said, speaking in a Feb. 20 interview with NCR. "I'm not pressing the alarm button, but I think to see it as anything other than that is to indulge in the old head-in-the-sand thing."

Coleridge, who is attending the Feb. 21-24 summit as the head of the Australian bishops' conference, also said during the interview that he is not satisfied with the current process being used by the Vatican to evaluate whether global bishops are fulfilling their obligation to report priests accused of abuse.

While he called Francis' 2016 motu proprio on the matter "a step in the right direction," he added: "We need to continue on the journey."

Coleridge suggested that a new process to hold bishops accountable on abuse cases could involve creation of groups at the regional level charged with investigating prelates alleged to have been negligent in their duty, which would forward their findings onto the Vatican for consideration.

"I could imagine a situation for instance where if a bishop has been derelict there would be perhaps a provincial or national group that might include the metropolitan or the president of the bishops' conference, assisted by experts of various kinds, who would assess the evidence," he said.

That group, the archbishop said, could "write a report … let's say [to] this new dicastery, who would then have their own processes whereby the local material is assessed and a recommendation formulated that would be presented to the pope."

Coleridge focused most of the 45-minute interview on what he has learned after some 25 years of holding meetings with clergy abuse survivors and on the aspects of the church's clerical culture that he said "at least aggravated, and perhaps caused, both abuse and its concealment."

"If we don't address cultural factors … then all we'll do is treat the symptoms and not the cause," he said. "And if that's what we do, abuse, in one form or another, will reoccur."

He suggested that the new Vatican office, or dicastery, could "gather up" all the various aspects of the abuse scandals that are currently handled by the Congregations for the Doctrine of the Faith, for Clergy, and for Bishops and consider the multitude of dimensions of the crisis.

Coleridge suggested that Francis himself could take on some sort of "unusual" level of responsibility for the office, like the pope has done with the Dicastery for Promoting Integral Human Development, where he has assumed direct responsibility for issues regarding migrants. 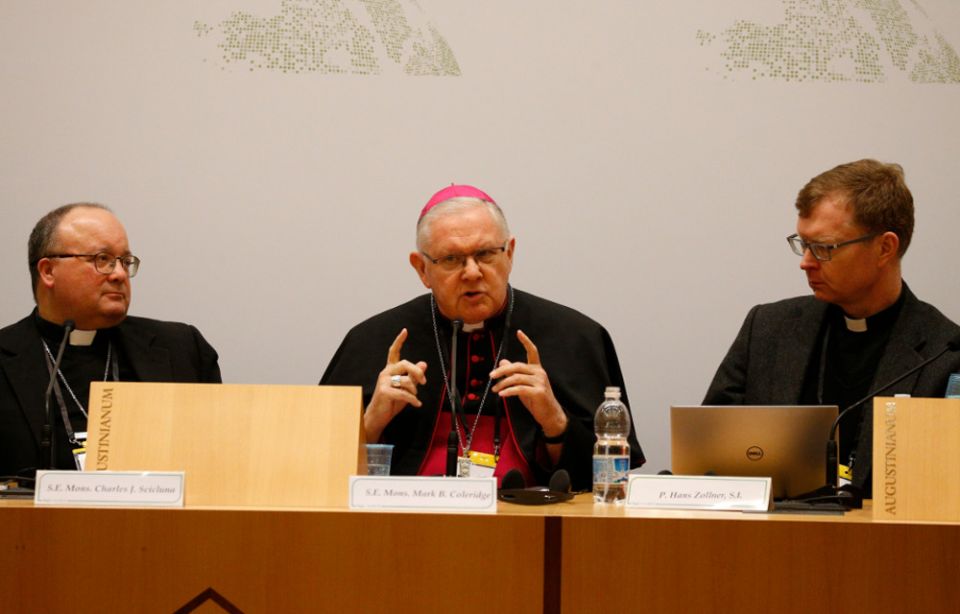 Archbishop Mark Coleridge of Brisbane, president of the Australian bishops' conference, speaks at a Feb. 21 news briefing after the opening session of the meeting on the protection of minors in the church at the Vatican. Also pictured are Archbishop Charles Scicluna of Malta, left, and Jesuit Fr. Hans Zollner, president of the Centre for Child Protection at the Pontifical Gregorian University in Rome. (CNS/Paul Haring)

In his remarks on accountability for bishops, Coleridge was referring to Francis' 2016 letter "As a Loving Mother," which empowered four Vatican offices to investigate bishops accused of negligence in abuse cases.

The letter replaced an earlier proposal, approved by the pope on the recommendation of the Pontifical Commission for the Protection of Minors, for creation of a new tribunal specifically tasked with judging bishops. Survivors and advocates have criticized the current process, calling it non-transparent.

"That's one of the problems," Coleridge acknowledged. "The Holy See in its processes I think does have to be more transparent. And I think that's recognized."

"We're still struggling to find mechanisms" for accountability, he said. "Traditionally, Catholic bishops have only been accountable to the Holy See. And that has been a hopeless failure in this area of abuse."

Coleridge said he is not in favor of a proposal to empower metropolitan archbishops to examine accusations made against bishops in their regions.

"If it's only the metropolitan archbishops … it's Caesar judging Caesar," he said.

"This is a global emergency. I'm not pressing the alarm button, but I think to see it as anything other than that is to indulge in the old head-in-the-sand thing."

A need for 'serious cultural change'

Coleridge, who has led his archdiocese since 2012, is the only Australian bishop taking part in the abuse summit.

He began the interview by talking about what he called the "dramatic experience" faced recently by the church in his country, which was investigated as part of a 2013-17 Royal Commission into Institutional Responses to Child Sexual Abuse.

"That whole journey of the Royal Commission was agonizing, in many ways and at many levels," said Coleridge. "It was a very painful experience of coming to another depth of awareness of what abuse is and what is required to ensure that abuse has no place in the church."

"What was abundantly clear from the years of the Royal Commission and from its final report recommendations is that we are facing the need for serious cultural change," he said. "It took me years and years and years to see this."

Coleridge described his own understanding of clergy sexual abuse developing over decades. He said he first considered the issue in terms of sin, then crime and finally as a culture.

The archbishop described the levels at which the church must confront the issue as deeply multi-layered. He discussed formation of seminarians, the need for bishops to better include laypeople in their decision-making and even the language the church uses for its leaders.

On the need to include laypeople in decision-making, Coleridge said bishops used to make judgments on accused priests on their own, without help even from one another.

"This is one of those things that led me to see that we're dealing with something that is essentially cultural or systemic," he said. 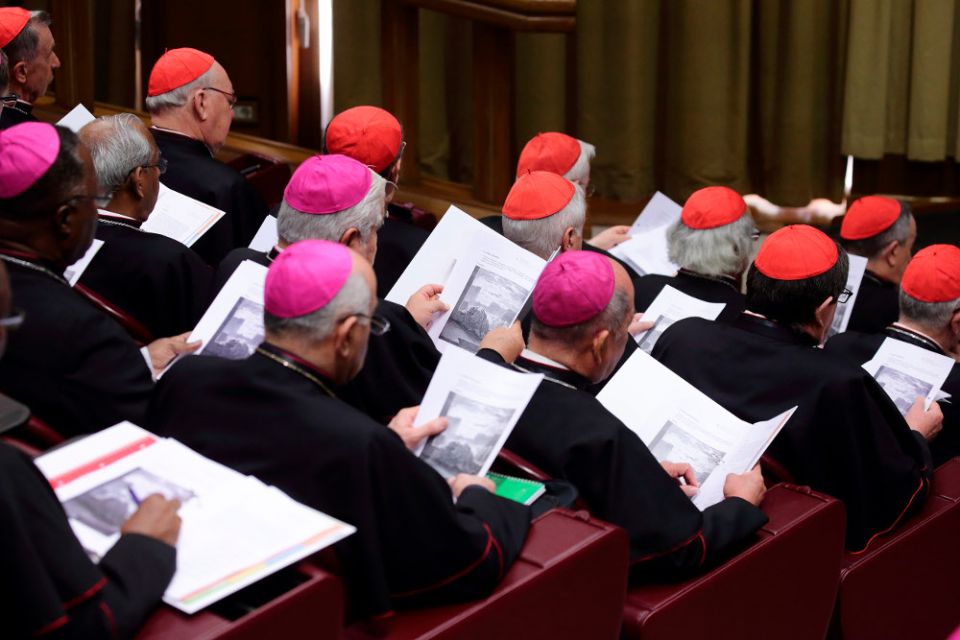 Prelates attend the opening session Feb. 21 of the meeting on the protection of minors in the church at the Vatican. (CNS/Evandro Inetti, pool)

"When you see the evidence of that over time, you have to ask is it cultural?" Coleridge said. "The answer of course is yes, it is. How else can you explain?"

Asked about a recommendation in the Royal Commission's final report that the Catholic Church consider making celibacy optional for priests, he said he had not seen evidence that had persuaded him that the church should give up its centuries-long tradition of not allowing clergy to marry.

But he added: "What is very clear to me now is that for all our fine talk and tweaking, our formation for celibate living in this current culture has been abysmal. So, there are massive questions … in that area of formation for priestly ministry."

Coleridge suggested that the church may need to reevaluate the basic model of the seminary it has been using since the reforms of the 16th century Council of Trent.

"I personally think that the attempt to tweak the basic Tridentine model that we've been going on with for about [500] years is probably close to being a failure," he said. "We need another kind of model of priestly formation that shows the same kind of creativity that Trent showed when it introduced the Tridentine seminary."

Coleridge also criticized what he called a "lack of structured and substantial professional development for bishops," saying that "needs to be examined very closely."

'Rage and grief' of abuse victims

Before being appointed to Brisbane, Coleridge had served as the archbishop of Canberra-Goulburn, Australia and as an auxiliary bishop in Melbourne. He said he began to understand clergy abuse as a crime when he started having meetings with victims and saw the "devastating effects" it had on them.

"For me the turning point was when I began to sit down across a table with victims and survivors and caught their rage and their grief," he said. "Once I started to do this over and over again, I began to understand the phenomenon, which you cannot understand until you've sat across the table from those who have been abused."

Coleridge suggested a lack of experience meeting with victims could be a "difficulty" for some Vatican officials.

"They are good people, they're full of good intention, but the problem is they've never sat across a table from a victim, face to face, and felt the rage and the grief, and also been immersed in a sense of personal helplessness," he said.

Scandals in the Catholic Church: Bad news and good news