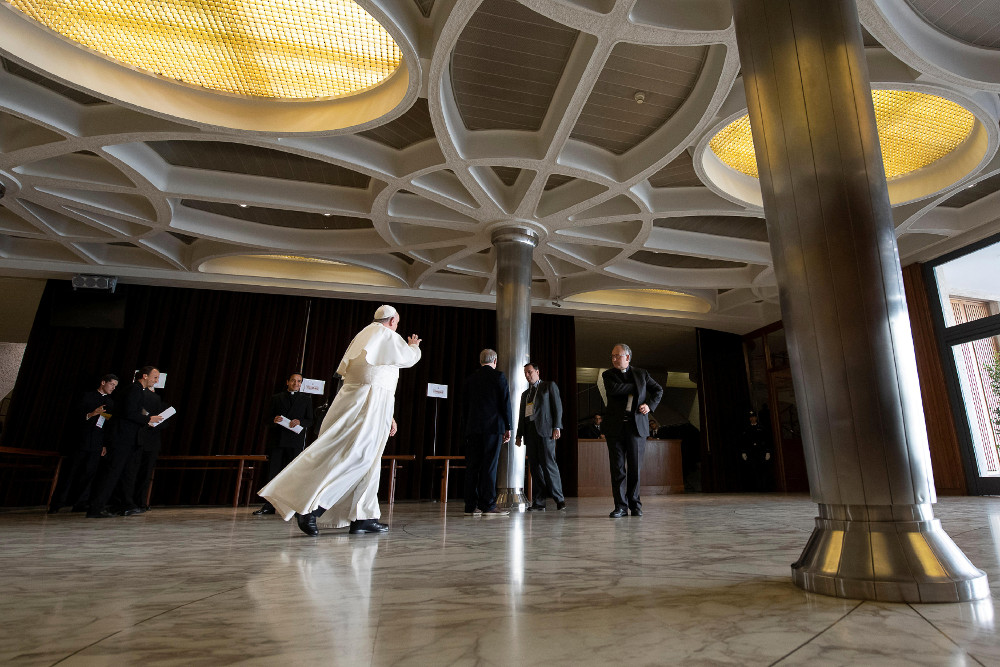 Pope Francis is seen Feb. 22, the second day of the Vatican meeting on the protection of minors. (CNS/Reuters/Vatican Media)

The recent Rome gathering of bishops from around the world to discuss the sex abuse crisis constituted a remarkable moment in the history of the scandal. I am aware of strong critiques coming largely from the right and left margins of the community, but it would have been difficult to imagine as little as five years ago a gathering of the hierarchy that so honestly discussed the depravity and failure of the clerical and episcopal cultures.

Even though it was, as has been the case with so many reluctant steps bishops have taken over the past 34 years, a reaction to bad news and public embarrassment, it did happen. Imperfect as it might have been, the meeting was not without significant merit — and you'll find an abundance of reporting on this site to back up that assertion.

I find it beguiling, to say the least, that on the left and right some use the same flaws in Pope Francis' approach — whether it is his rhetoric at times or real flubs in analysis and action — to serve their peculiar ends in discrediting his papacy. Some of those on the far right have been quite transparent in characterizing him as, in their view, deficiently orthodox and lacking in rigid absolutes in his approach to faith. Others on the far left would score him because he doesn't check off all the boxes on the liberal wish list. Let's leave it at there's no perfect pope.

Acknowledging any of those objections falls far short of establishing culpability for his abetting or ignoring the abuse crisis, particularly when his words and actions are compared to the two prior papacies. In short, he inherited an incredible mess and has done more to demote and defrock errant bishops, archbishops and cardinals than anyone previously.

The fact that nothing seems to be enough or to satisfy the demands of justice says more about the deeply rooted nature of the problem than any single pope's ability to combat it. And in the doing, Francis has relentlessly preached and modeled reform of the clerical culture and a church in which concern for the poor is central.

For years, we have made the case that the sex abuse crisis, awful as it is, is still a symptom of much deeper maladies in the clergy culture. The irony, of course, is that even those clerics, from priest to pope, who desperately desire reform speak and act from within the context of that culture. It's difficult to see how the members of the culture break out of its grasp — its presumptions and habits and privilege — short of some enormous and radical upheaval.

I would often wonder in the past — it was a professional obligation, after all, that I make my way through reams of depositions, earlier grand jury reports and stacks of documents from plaintiffs' lawyers and experts — when the church would turn some corner of realization and figure out how to deal with the crisis. The awareness I slowly came to is that no corner exists around which is some magical, instant conversion. We are involved, instead, in a long, difficult grind toward reform. So one might throw hands up in abject frustration that the Rome meeting did not result in the kind of conversion and resolve that to some seems the quite obvious and necessary step.

But the bishops, I have come to conclude, are not the only ones culpable for an agonizingly slow ascent to the truth. It was only recently, in conversation with smart and engaged Catholics, that I realized that some in the community had cordoned off the ugliest realities of the scandal until a critical mass of evidence of the evil broke through those barriers. For many, the revelations out of the Pennsylvania grand jury report and about the former cardinal, Theodore McCarrick, constituted a tipping point. And especially the news about McCarrick. That apparently forced open a space that a lot of people had been able to keep locked, a space that held out, evidence aside, that the abuse scandal wasn't really as pervasive and deep as some maintained. That the "good guys," and McCarrick was certainly one of them, more than balanced out the "bad apples."

Maybe there's only so much we can take in at one time, only so much displacement of long-held belief and trust before acknowledging there's even more.

In the long unfolding of this scandal. Perhaps the Rome meeting is another of those tipping points.

If national correspondent Heidi Schlumpf's report on "new bishops" is any indication, the long slog has brought new insights and determination in even the hierarchy. Her interviews were with some of the bishops that U.S. bishops' conference president Cardinal Daniel DiNardo termed as being "more angry than some of us who have been around a little longer." More than a little anger is warranted. And so is resolve to change things, the "prudence" cautioned by DiNardo notwithstanding.

One sign of hope is that the "younger" bishops don't seem to be as beholden as those who have been around longer to episcopal niceties. 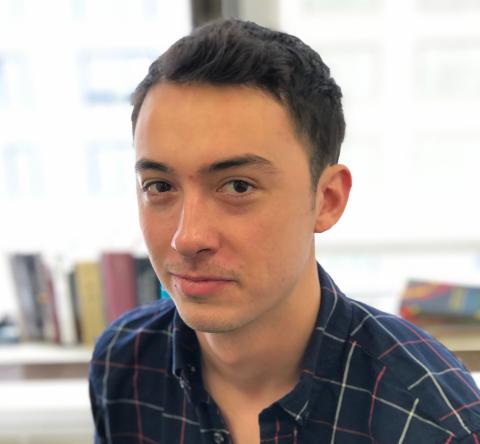 He lives in Arlington, Virginia, where he is an active member of Our Lady Queen of Peace Parish. Following graduation, he served a year with AmeriCorps as a teacher's assistant in a low-income elementary school. At Duke, he wrote and produced several projects for "The Measure of Everyday Life," a program aired on WNCU, a public radio station in Durham, North Carolina, and he also wrote a biweekly column for the Duke Political Review during the 2016 primaries.

Remedios has already reported the story about DiNardo's speech, mentioned above, and on Catholicism's historic involvement with minstrelsy in the United States.