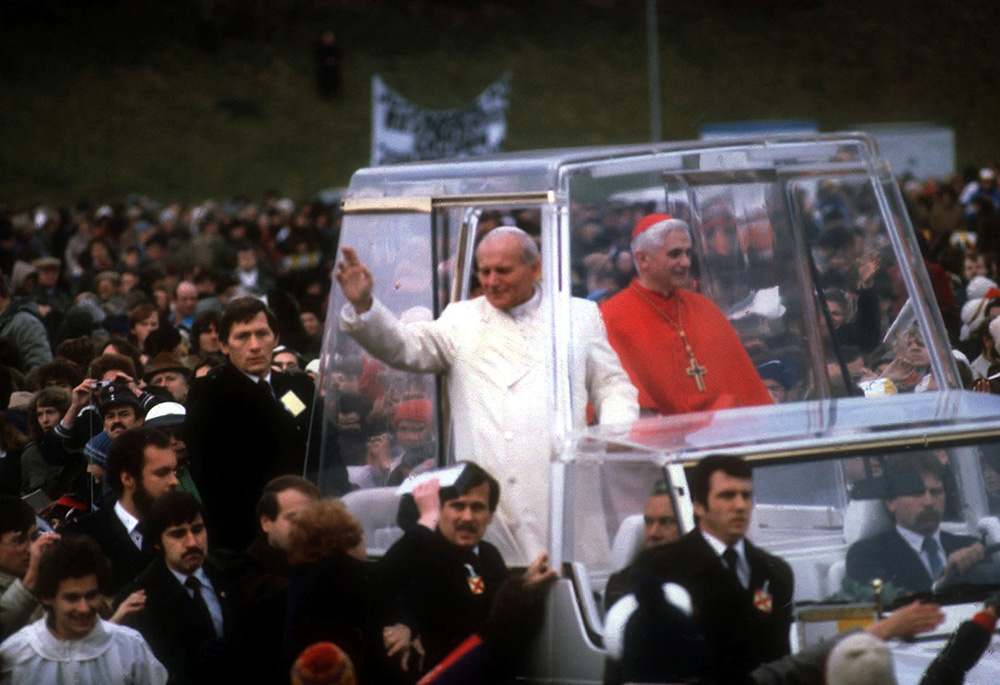 St. John Paul II and Cardinal Joseph Ratzinger ride in the popemobile during a visit to Germany in 1980. The cardinal -- now retired Pope Benedict XVI -- headed the Archdiocese of Munich 1977-1982. (CNS photo/KNA)

A German report's faulting of retired Pope Benedict XVI's handling of four cases of clergy sexual abuse in the 1970s and '80s has sparked shocked reactions among victims' advocates, theologians, and even Vatican officials.

Immediately following the Jan. 20 release of the about 1,000-page report, which looked into abuse in the Archdiocese of Munich and Freising between the years of 1945-2019, the German church reform group "We Are Church" called on Benedict to take personal responsibility.

Cardinal Joseph Ratzinger, who became Pope Benedict in 2005, served as the head of the German archdiocese from 1977 to 1982.

The Survivors Network of those Abused by Priests, more commonly known as SNAP, also called on Benedict to take responsibility by giving up his title as "pope emeritus."

"True action could come in the form of admission from Pope Benedict XVI and for him to relinquish his honor as Pope emeritus," said a statement. "That could start the act of contrition."

The Jan. 20 report was conducted by an independent law firm at the request of the German archdiocese. Its authors identified nearly 500 victims of abuse in the archdiocese over seven decades, and implicated Benedict and two living Catholic cardinals for what it deemed "misconduct" in handling abuse cases.

"In a total of four cases, we came to the conclusion that the then-archbishop, Cardinal Ratzinger, can be accused of misconduct," said one of the reports' authors, Martin Pusch.

At a press conference, investigators said that they believe the actual number of cases of abuse to be far higher than what is included in the report's findings.

"Far too often, despite clear knowledge of acts of abuse, priests continued to be employed in pastoral care," the investigators said.

German Jesuit Fr. Hans Zollner, one of the Vatican's point persons for clergy abuse, told NCR he is sure that abuse survivors again are "devastated" and "angry" to once more hear the church's failures recounted.

The numbers of victims are "shocking and cruel," said Zollner, who added that while it is necessary to produce such reports to account for past failings, many survivors relive their pain each time a new report is published.

"Numbers are always people and behind those numbers are people whose lives have been destroyed. And the clear message is that the church must wake up and take responsibility," said Zollner, who is a member of Pope Francis' clergy abuse commission.

"In this case, as in so many others, we see how the so-called 'scandal' brought about by revelations of abuse has been understood by church leaders as a far graver sin — and thus a more pressing concern — than the abuse itself," Reynolds told NCR.

"It's more than a case of misplaced priorities," said the theologian. "Instead, it gets to the heart of the story that the church has told about itself for centuries. Maintaining an image of authority predicated on moral perfection comes at a high cost. And for the church, that cost is measured in human lives."

Nicholas Cafardi, a civil and canon lawyer, told NCR by email that while it would be canonically possible for Francis to judge Benedict XVI's past actions and impose a penalty on the retired pope, such a step would be highly unlikely.

He went on to note that along with Benedict's age and physical condition, Francis already has a track record of refusing resignations, including German Cardinal Reinhard Marx, a prominent ally of Pope Francis, who had previously offered his resignation to the pope and is implicated in the new report for mishandling two cases.

"In the case of aged prelates who no longer hold any office, the most common canonical penalty for this sort of offense has been a life of prayer and penance, but Benedict is already living a life of prayer," Cafardi added.

By the end of the day on Jan. 20, the Vatican, Pope Benedict XVI's personal secretary and the Archdiocese of Munich and Freising had all issued muted responses, requesting time to absorb the more than 1,000 pages of findings in the published report.

Zollner said this caution was understandable given such a length, but he added that the church will have to eventually account for its findings, which he said must lead to action.

"This is not only about legal and political and canonical points that we are talking about," he said. We are talking about people who have been harmed grievously, and they must get at least some kind of justice, at least as much as we can expect in this world."

A version of this story appeared in the Feb 4-17, 2022 print issue under the headline: Faulting of Pope Benedict's handling of abuse cases sparks sharp reactions.