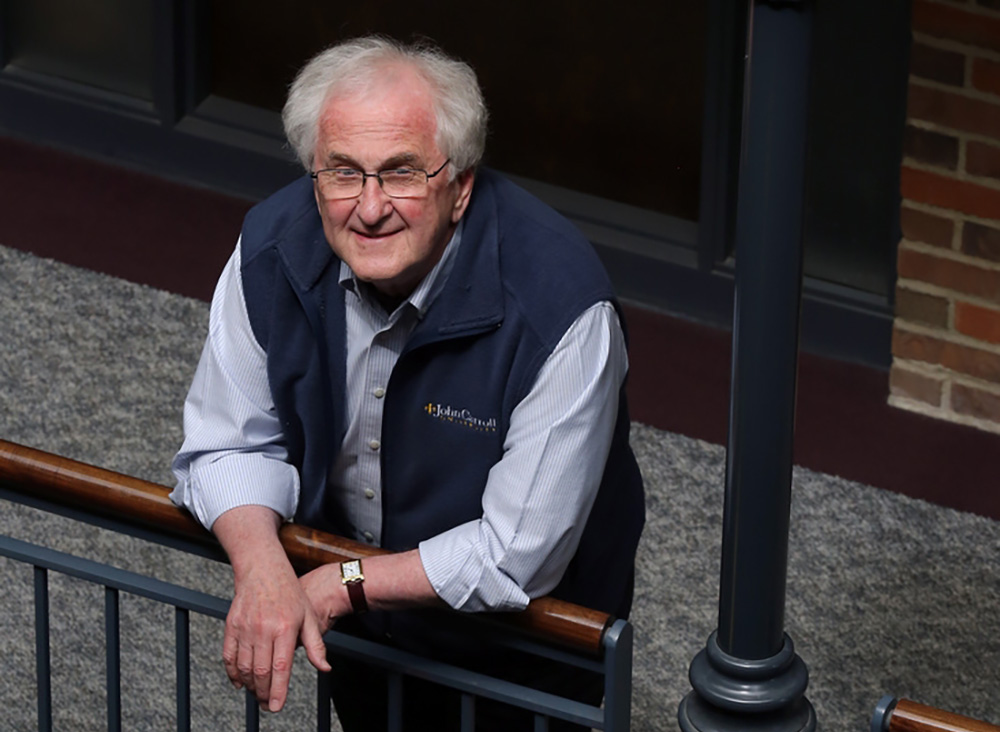 Fr. Donald Cozzens on the campus of John Carroll University in suburban Cleveland in 2015 (CNS/William Rieter)

Fr. Donald Cozzens turned the tables on conventional ideas about priest and prophet.

He showed that priests of the modern era need not play the role of serfs to the ecclesial lord of the manor. They need not be silent nor swallow the difficult truth they've come to understand about the culture that formed them and expects eternal obeisance.

He showed, too, that prophets need not rant and call down the wrath of God. He demonstrated they could upend faulty presumptions and conceits by quietly, diligently and in great detail laying bare the truth.

One might also suspect that Cozzens would advise anyone with royal ecclesial ambitions to leave the third element of the mission of the baptized — that of king — to God alone. After all, in his book Faith That Dares to Speak, he writes that we're witnessing in the contemporary church the "unraveling of the last feudal system in the West."

From his initial book, The Changing Face of the Priesthood, an unblinking assessment of the clerical culture, through his broader and deeper analyses of the church in Faith That Dares to Speak, Sacred Silence: Denial and the Crisis in the Church and Freeing Celibacy, Cozzens, who died Dec. 9, delivered an exhaustive diagnosis of the serious maladies impairing the life of the church.

I first became acquainted with Cozzens in 2000 when a writer friend called and urged me to get my hands on The Changing Face of the Priesthood and write about it. It was a riveting examination of the priesthood at the start of the 21st century, done with the authority of a doctorate in psychology and years of experience as a college professor and, later, someone entrusted with shaping the priesthood he would eventually critique.

He spent time in parish ministry and teaching high school before joining the faculty of Ursuline College, where he taught from 1978 until 1989, when he was named vicar for clergy and religious by the then-bishop of Cleveland, Anthony Pilla. In 1996, he was appointed president-rector of St. Mary Seminary and Graduate School of Theology in the Cleveland Diocese.

I was struck that someone with his credentials (it would not be unusual that they would lend themselves to ecclesial ambition) would forfeit all that he had earned to so publicly tell the truth about an institution that was clearly in deep trouble.

Those of us who covered the church were quite accustomed to the layers of whispered gossip, accompanied by knowing winks and nods, common in clerical circles. By the time Cozzens published his much-talked-about Chapter 7, "Considering Orientation," in which he asks if the priesthood is becoming a gay profession, that reality was no longer a secret. We'd all written about it to some degree.

Cozzens, however, went beyond the whispers and the bare acknowledgment to speak frankly about what such dynamics might portend for future ministry. He didn't do so with malice or threat. He didn't do anything with motives approaching anything like malice or threat. As I wrote back in 2000, he viewed it as "an issue whose implications for the priesthood 'must be faced compassionately but candidly.' "

Cozzens wrote — he was unyieldingly hopeful if equally unyielding in his pursuit of truth — that 'the priesthood is at the edge of a new day following a painful yet purifying dark night.'

It was but one of the issues shaping a church where the institutional structure as it exists is unsustainable. He knew, and related in the book, the reality that faced the church in the United States and Europe where, in the 30 years prior to the turn of the millennium, the number of candidates studying for priesthood had declined by 80% and the number of priests had declined by 40%.

And yet he wrote — he was unyieldingly hopeful if equally unyielding in his pursuit of truth — that "the priesthood is at the edge of a new day following a painful yet purifying dark night."

That book would change the course of his life. He would leave the position at the seminary and return to the academy, eventually taking the post as visiting professor of religious studies at the Jesuit-run John Carroll University in University Heights, Ohio, and later as writer in residence until his retirement in 2016.

If he became known as a critic of the institutional church — national TV interviews about his thoughts on the abuse crisis and other ecclesial matters elevated his profile — he also was widely recognized among peers and people who knew him as a gentle and generous soul who lived a version of the solution to the problems he described.

For decades, he met for morning coffee on Saturdays with a group he dubbed the "coffeehouse theologians," a band of people similarly in love with and concerned about the church. He told me they often helped him sort out his thinking.

"He was always an advocate for women in the church. He had worked with campus ministers and knew the effectiveness — and importance — of female pastoral care," she said.

"I sought his advice more than once during my years at FutureChurch," she wrote. "He was invariably strategic and consoling through some dark times."

Fr. Thomas Fanta, pastor of the Church of St. Dominic in Shaker Heights, a Cleveland suburb, reached out to Cozzens when he realized the priest writer might be receiving a bit of the cold shoulder from the local clerical establishment. "I asked if he was interested in helping out at Mass," Fanta said in a recent phone conversation.

'Before I see the church emerging into new forms, it actually is going to do some submerging. A good percentage of the church is grieving right now.'

And always, whether at the parish or going to dinner with Cozzens, "it was the conversations" that Fanta found so rich and interesting. They were kindred spirits. "Things would sadden us, but Don could always find the hope," Fanta said.

Often, it was long-term hope. After writing about his first book, I spent a lot of time talking with Cozzens who, during my term as editor of NCR, always was available to help me gain perspective on the latest scandal breaking or to talk through the theology and psychology of events unfolding. Every Catholic editor should be so fortunate to have such willing and wise counsel.

I interviewed him in his office in 2010 for a series called the Emerging Church. He was not as sanguine as I about where things were headed.

"Let me say that before I see the church emerging into new forms, it actually is going to do some submerging," he said. "A good percentage of the church is grieving right now. We're closing parishes. We're consolidating parishes. Fewer people are going to Mass on Sunday."

I'm glad I got his prescient viewpoint on the record. He was seeing well down the road at a church even today submerging and trying to find out how to emerge anew. 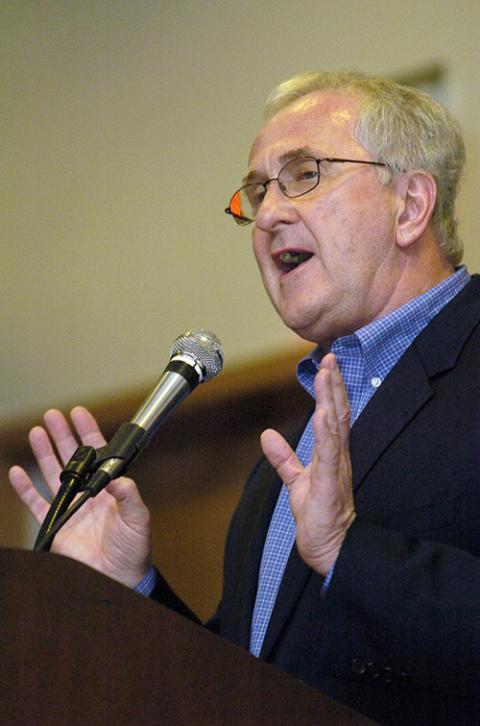 Fr. Donald Cozzens addresses a crowd of several hundred Catholics in Milwaukee on Nov. 4, 2005, at the national conference of the reform group Call to Action. (CNS/Catholic Herald/Sam Lucero)

If there were times when Cozzens would have liked to climb to the chancery roof and scream about hierarchical blindness and arrogance — and he knew the frustration that would drive some to such measures — he didn't. Instead, I like to think he called on his most creative side and made such antagonists characters in a trilogy of mystery novels, Master of Ceremonies, Under Pain of Mortal Sin and The Cardinal's Assassin. They are clever, engaging, full of insider know-how and the antidote to whatever new absurdity is issuing from some chancery office. It's a creative way he found of continuing as priest and prophet.

In Faith that Dares to Speak, published in 2004, Cozzens describes the church in terms of a feudal culture based on the understanding of the institution, summed up by Pope St. Pius X in the 1906 encyclical Vehementer Nos. Pius describes a vast gulf between priest and people, one he believes is ordered by God, and states that the "only duty of the multitude is to allow themselves to be led, and, like a docile flock, to follow the pastors."

That, wrote Cozzens, sets up an unavoidable and as-yet-unresolved tension with the Vatican II "understanding of the church as fundamentally the baptized communion of Jesus' disciples who possess gifts and talents for the mission of the church freely given by the Spirit." Until that becomes the lived experience of the church, "suspicion and mistrust" will continue between laypeople and church authorities.

And he believes it could be decades before the storm settles. "What's happening now, what's emerging right now, if it's a movement of integrity and wholeness, then I hope we're going to have a new respect for the freedom of the Holy Spirit to give charisms of leadership in ministry where the Spirit wills," he said.

"As I say that, I'm afraid I'm a little nervous that I am being too optimistic here. It could be a generation or two of real darkness before something happens."

Predictions aside, Cozzens left behind enough wisdom to get us through the dark times with a thorough understanding of the direction we must take, and why.

A version of this story appeared in the Jan 7-20, 2022 print issue under the headline: Fr. Don Cozzens unveiled problems in the priesthood.