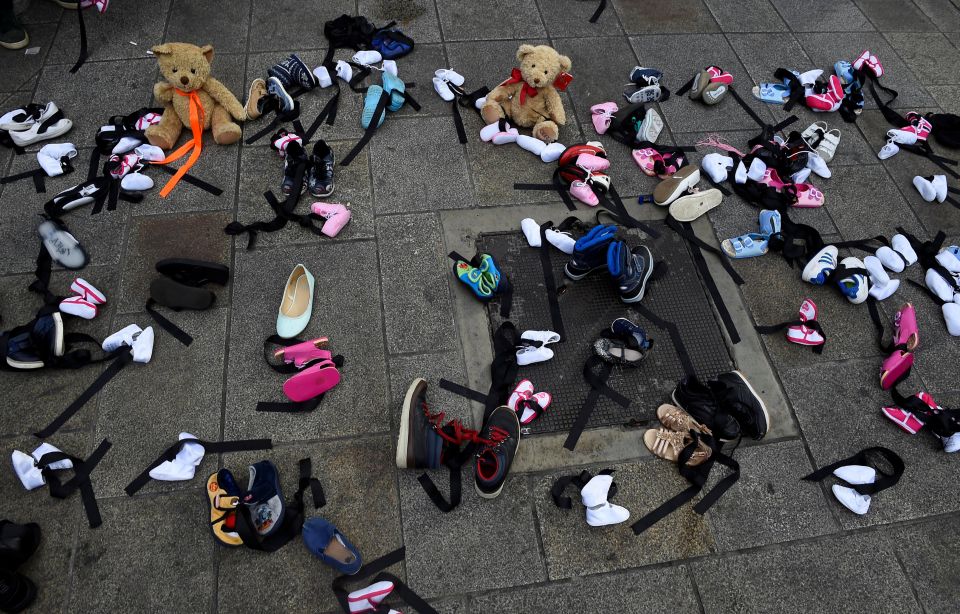 Children's shoes and toys are seen on a sidewalk in Dublin Aug. 25 as part of a demonstration against clerical sex abuse in Dublin. Pope Francis met privately for an hour and half with eight Irish survivors of clerical, religious and institutional abuse. (CNS/Reuters/Clodagh Kilcoyne)

Dublin — Pope Francis met eight survivors of clergy and institutional abuse on the first of his two-day visit to Ireland, in a 90-minute encounter several in the meeting called "cordial and polite."

Among those included in the Aug. 25 meeting were Marie Collins, who resigned in frustration from the Pontifical Commission for the Protection of Minors in 2017, and two persons who were forcibly separated from their mothers as babies at church-run institutional homes.

"Pope Francis condemned corruption and cover up within the church as 'caca,' " said a statement made by the latter two survivors after the meeting. It specified: "Literally filth as one sees in a toilet, his translator clarified."

Those two survivors, Clodagh Malone and Paul Redmond, also said Francis had agreed to include a special message about babies who were given or sold for adoption from their mothers at so-called Mother and Baby homes in his homily at a Mass in Dublin Aug. 26.

Malone, the statement said, asked the pope to "to clearly and publicly state that the natural mothers who lost their babies to adoption had done nothing wrong and call for reconciliation and reunion for these families broken by the Catholic Church."

"The Pope agreed to include the message in his mass tomorrow," said the statement.

Malone and Redmond are members of the Coalition of Mother And Baby home Survivors, which estimates that tens of thousands of women and girls went through nine such homes between 1904 and 1996.

According to the Vatican, the others taking part in the Aug. 25 meeting were: Fr. Patrick McCafferty, Fr. Joe McDonald; Dublin City Councilor Damian O'Farrell, Bernadette Fahy, and another person who preferred to remain anonymous.

McCafferty, a priest of the Down & Connor diocese in Northern Ireland, said the encounter was "truly excellent ... in every way."

Francis spoke about clergy sexual abuse earlier Aug. 25 in his first address during his trip to Ireland, given to about 250 of the country's political, civil and religious leaders.

The pontiff said that Catholic leaders in the country failed over decades to protect children from abuse by priests and clergy, saying bishops and superiors had caused what he termed "grave scandal."

Read this next: When in Dublin, Francis should apologize for Magdalene laundries, too

New film 'Philomena' has lessons worthy of the Gospel