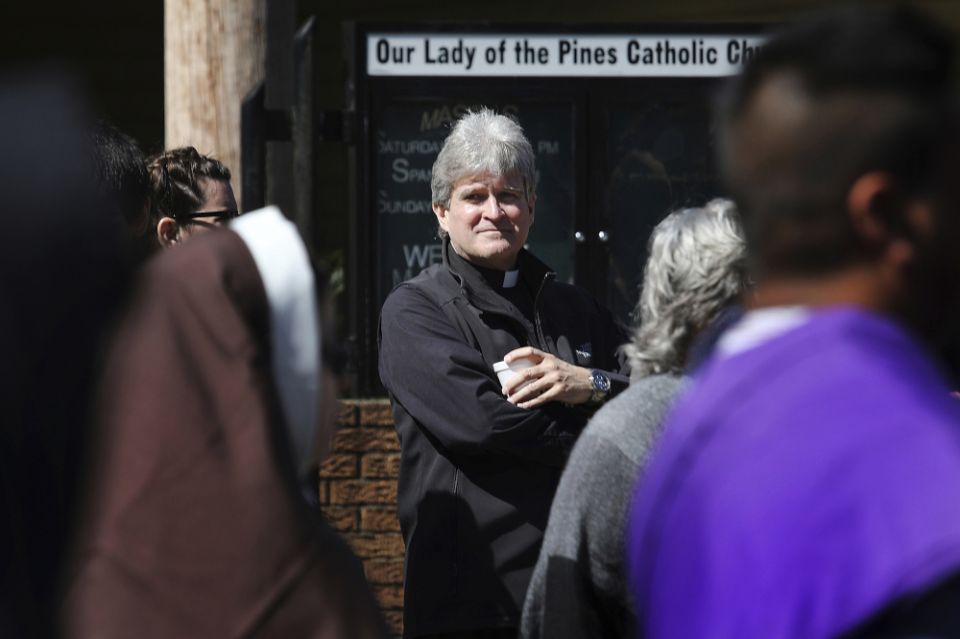 Monsignor Frank Rossi stands outside Our Lady of the Pines Catholic Church in Woodville, Texas, on April 14, 2019. (AP/Wong Maye-E)

New questions about how Catholic leaders deal with sexual misconduct arose June 4 after a Texas woman claimed in a news report that church officials in Houston allowed a priest with whom she had a sexual relationship to continue in ministry at a parish two hours away.

Yesterday’s story following an Associated Press investigation detailed an unsettling account of Laura Pontikes, who said Cardinal Daniel DiNardo, head of the Archdiocese of Galveston-Houston the current president of the U.S. Conference of Catholic Bishops, failed to respond adequately to her 2016 claim that Monsignor Frank Rossi, a deputy to DiNardo, had begun a relationship in August 2012 after the cleric spent years as her priest and confessor.

Pontikes claimed that Rossi induced her to perform sexual acts in his office during spiritual direction sessions, absolving her of her sins and eventually consummating their relationship with intercourse — all while the priest argued that such "holy touches" were encouraged by Paul the Apostle. Rossi also allegedly pushed her and her husband to donate millions of dollars to his church, St. Michael the Archangel.

In the era of #MeToo and #ChurchToo, the fact that the accuser is an adult has not spared the church new scrutiny about the church hierarchy’s slowness to respond to sexual misconduct claims or about what experts have been quick to call confusion regarding what constitutes consent.

"People make assumptions that maybe once someone’s an adult, 18 or 19, that they can consent," said David Pooler, a professor at Baylor University who has studied abusive sexual relationships between clergy and other adults.

"The research that I’ve done in this area … is that that there was no ability to consent (to a relationship with a priest) because of the dependence that the parishioner or congregant had on this priest."

According to the AP, the Archdiocese of Galveston-Houston acknowledged that Rossi’s relationship "included encounters of a sexual nature" but insisted the relationship never involved intercourse and that the priest never heard Pontikes’ confession during or after the relationship became physical. (A priest absolving someone with whom he has engaged in sexual sin is a crime under canon law punishable with possible excommunication.)

Pontikes and her husband, George, argue that not only did Rossi manipulate and betray his parishioner, but that the archdiocese’s attempts at mediation focused primarily on financial settlements.

After the relationship was revealed to church officials, Rossi was placed in a smaller parish in the same state. It was only this week that the Diocese of Beaumont, where Rossi still served until recently, announced that he has been placed on "temporary administrative leave" pending the outcome of a criminal investigation of the relationship.

Texas law states that if a clergyperson exploits a person’s emotional dependency for sex, then it is without consent.

"Clericalism is a problem with many consequences," Imperatori-Lee said, referring to a common criticism that the church protects its leaders, even when it means dismissing the needs of its followers.

"One of those is that the priest, when viewed as superhuman, is always already in a position of power vis-a-vis a layperson. Thus, if a sex act occurs or is initiated by either party, the person with the power is responsible — in this case, the priest."

She added: "The fact that sacramental confession entered into this case is even more worrisome, particularly if the priest’s superiors did not inquire about it."

Pooler said Pontikes’ account of her interactions with Rossi — a relationship that began slowly, couched in spiritual language, and was magnified by a church hierarchy that is slow to respond — matches patterns he found in a survey of 27 survivors of clergy-perpetrated sexual abuse.

"The 27 survivors (said) the way they were treated by the church was actually worse than the abuse itself," Pooler said.

Pooler’s research included people from both Protestant and Catholic traditions, and he was quick to stress that the broader issue of sexual abuse among adults is not unique to Catholicism. But he noted that accounts of high-ranking church officials’ shielding the institution appear to be more and more common.

"It’s almost like the institution cannot function without protecting itself," he said.

In Rossi’s case, the breakdown of accountability could be seen as particularly acute: While serving the Galveston-Houston Archdiocese in various roles such as vice chancellor, Rossi helped handle many of the region’s abuse cases. 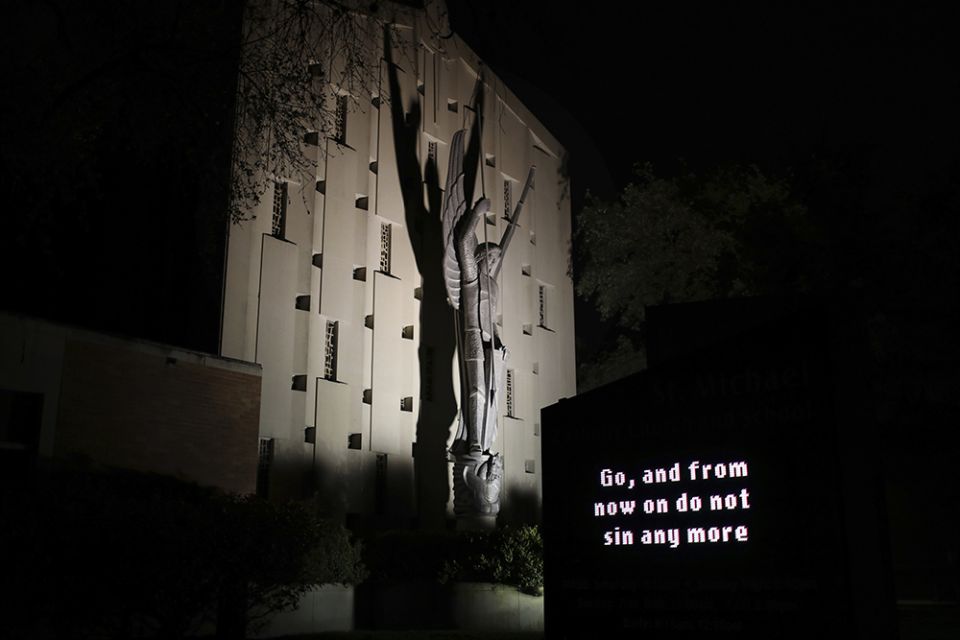 An illuminated sign outside St. Michael Archangel Catholic Church in Houston reads, “Go, and from now on do not sin any more” on April 11, 2019. The Catholic church, which has been grappling for decades with the sexual abuse of children, is now being forced to reckon with the recognition that adults too can be sexually exploited by clergy. (AP/Wong Maye-E)

Imperatori-Lee said the church’s top-down attempts to cure its systemic problem of dealing with abuse, which have been a priority since the 2002 "Spotlight" scandal, may be working against it.

"When parishes and dioceses over-rely on prepackaged compliance programs, a false sense of having ‘solved’ the problem or ‘trained’ personnel can substitute for the genuine vigilance that is required when we are dealing with vulnerable people — children, but also those in spiritual pain who are seeking help," she said.

She added: "Sexual abuse in the church must be addressed, but it requires a cultural shift away from secrecy and toward transparency. Online training, HR courses or in-service days give us the illusion of ‘doing something’ without genuinely shifting clerical culture."

It remains unclear as to what impact the scandal will have on DiNardo, who is already under fire for allegedly not doing enough to stop a priest under his purview who is currently being charged with two counts of indecency with a child that occurred in 1998 and 2000.

In December 2018, the Survivors Network of those Abused by Priests called for DiNardo’s resignationas head of the U.S. Conference of Catholic Bishops, a month after the offices of the Galveston-Houston Archdiocese he leads were searched by police.

According to the AP, police found files locked away in a bank vault during their search that the archdiocese had previously failed to turn over.

Australian bishops to implement new protocol on responding to abuse