In the face of sex abuse, the church should rethink the sacrament of reconciliation 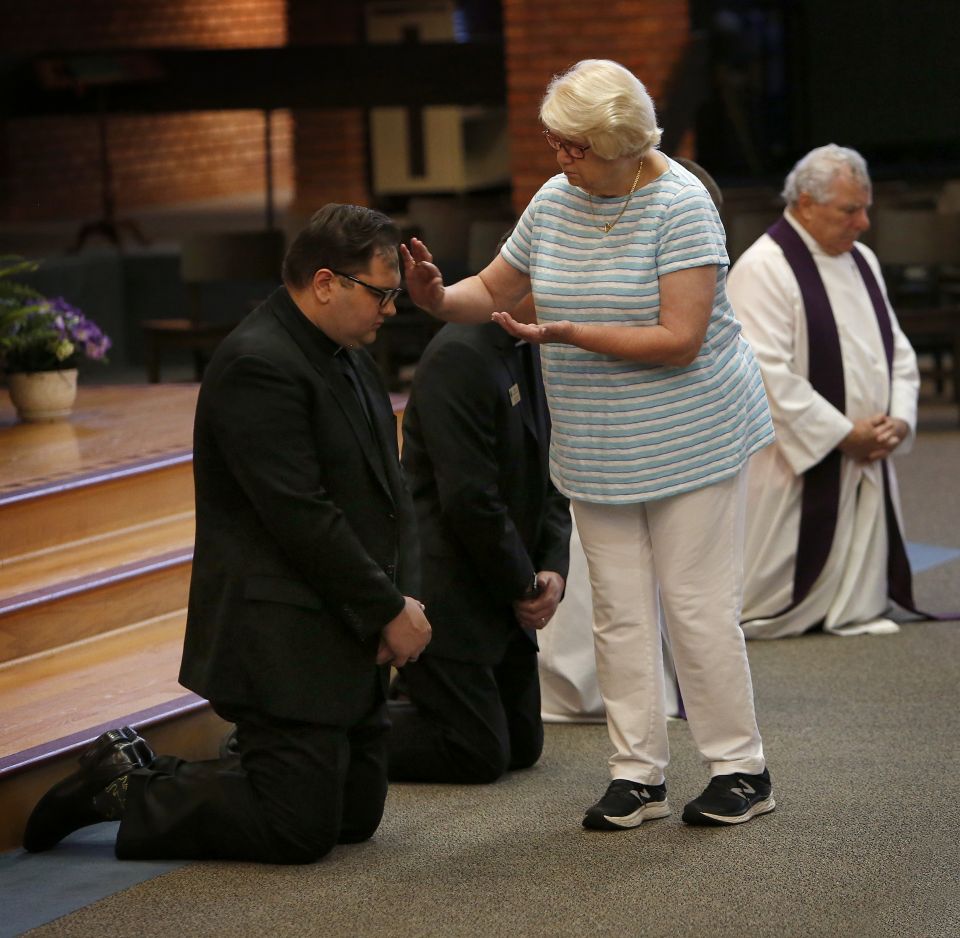 A woman administers ashes on the forehead of Father Brad Zamora during a prayer service for repentance and healing for clergy sexual abuse which included prayers for victims, abusers and the church, Aug. 22 at Our Lady of the Brook in Northbrook, Ill. (CNS photo/Chicago Catholic/Karen Callaway)

The NCR editorial staff did not mince words in its open letter to U.S. Catholic bishops. Its insistence that "it is over" is compelling.

Let me just highlight a few points that the editorial makes.

First, the editorial highlights the efforts church leaders made to hide the truth of the scandal from the faithful, the public and law enforcement.

The authors then go on to describe the pharisaical nature of our hierarchy. They have been "imbibing the excesses of power, authority and privilege that have accrued over centuries."

It is also important to note just how big a deal the present crisis is. NCR says there is no precedent in U.S. church history and perhaps in global church history for what is facing the church right now. This is not about a debatable religious or dogmatic issue. It is a "rot at the heart of the culture entrusted with leadership of the Catholic community."

While the editorial acknowledges that the church has done some good things that makes it a safer place today, it notes that these changes were essentially made only because the scandal became public. Thus, "you were moved to words of contrition because you were, once again, caught."

These are strong words from the editorial staff of NCR. The staff is still looking to the hierarchy for a true personal examination, sincere desire for forgiveness, and a resolve to change. It demands ceding authority and ridding the clerical state of privilege and power.

Maybe it's just me, but I find myself compelled to explore the sacrament of reconciliation when I ponder the current state of church leadership. While this may not be the most important issue the church faces because of this crisis, I somehow feel it stands at the core of what is wrong with the church today.

I'm quite sure that I am not the only Catholic that has stopped going to confession. A lot of effort is being taken to get Catholics back to the sacrament with some limited success. I wonder though why the church would do that. It seems to me they are moving in the wrong direction.

While I fully understand that some Catholics who are comfortable with a certain priest or any priest and feel the need to unburden themselves would look to the traditional sacrament, I suspect most Catholics have difficulty accepting the idea that a member of this failed clerical caste should hold the power of absolution in their hands. The requirement that a lay person must describe their personal failings to another human being who is traveling the same journey of human failure and weakness is no longer viable.

I am not questioning the multitude of good and faithful priests we encounter every day, but even they are tainted by the stain of what has occurred. When they stand to exercise their role as priest, they need to acknowledge that their credibility and the expectation that the faithful should see them as a real representative of Christ is deeply eroded.

For me, I fail to see from the hierarchy any sense of humility or acceptance of the failure of the church as an institution. Their belief that their flock should continue to follow them, trust them and acquiesce to their demands suggest they still don't get it.

We have the Easter appearance of Jesus to the disciples in the 20th chapter of John, saying, "Whose sins you forgive are forgiven them, and whose sins you retain are retained." So, are we stuck with ordained clerics holding the power of forgiveness over us?

Let's take a quick look at the history of the sacrament in the church. The church's power to forgive sins was originally seen as the power to baptize. It was in baptism that sins were forgiven. It was not until the seventh century that some rudimentary form of private confession began for monks in Ireland.

Clearly the sacrament of reconciliation as we know it today is not the only way the church can exercise its power to forgive. What a strong message it would send if general absolution were offered to the faithful, especially at Christmas and Easter. It would provide a way for the church to show that it can use its power out of generosity rather than in a stingy way that requires recitations and explanations of personal failure. In light of the current abuse crisis and cover-up, generosity and forgiveness seem like a pretty good idea.

Of course, we know how slowly the church moves on anything, and, again, this is perhaps not the most pressing issue the church faces right now. Yet, what an opportunity this is for the clergy to acknowledge how complicit they are in sin and seek forgiveness from God in front of the whole Christian community. Imagine the priest kneeling as a part of the community during a communal penance service and seeking forgiveness together for individual sins and for the sins of the ecclesial community.

It is time for the priest to move away from the idea that he is somehow sacred and set apart, and instead see himself, or herself, as a member of the community like the rest of us.

Accountability | In the face of sex abuse, the church should rethink the sacrament of reconciliation