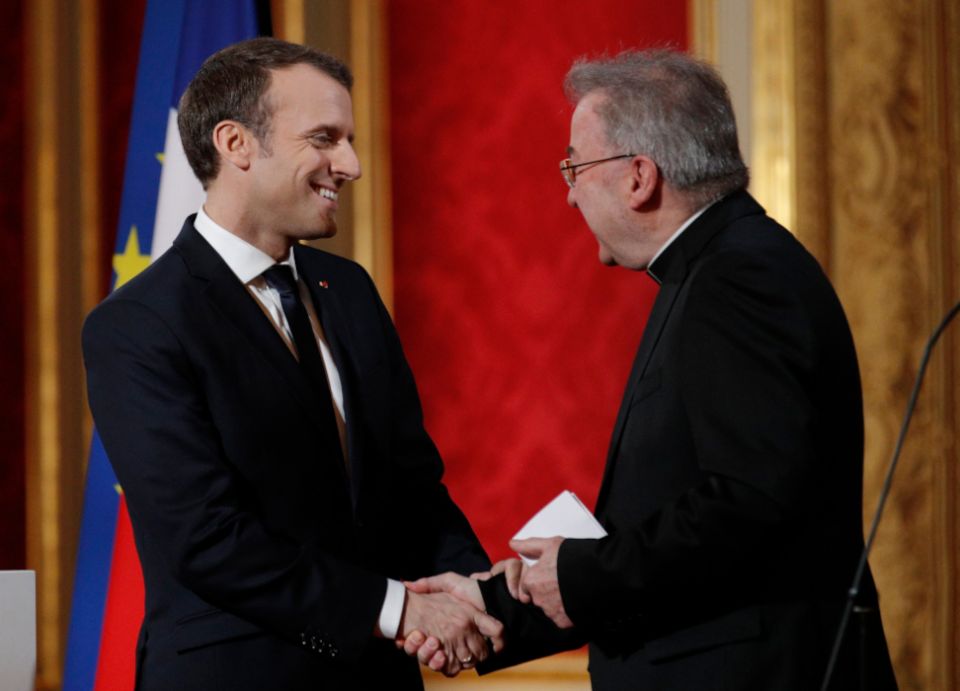 In this Jan.4, 2018 file photo, French President Emmanuel Macron, left, greets Apostolic Nuncio to France Luigi Ventura, at the Elysee Palace in Paris.A Paris court is expected to hand out its verdict Wednesday on a former Vatican ambassador on trial in France for sexually assaulting five men in 2018 and 2019. (Pool via AP/Yoan Valat)

Paris — A Paris court on Dec. 16 convicted a former Vatican ambassador to France of sexually assaulting five men in 2018 and 2019, and handed him a suspended 8-month prison sentence.

Retired Archbishop Luigi Ventura, 76 — who was not present in court — was "shattered" by the verdict, according to his lawyer, Solange Doumic. She said she was uncertain whether he would lodge an appeal because the procedure "has been extremely painful for him."

Ventura has repeatedly denied wrongdoing. Sexual assault is punishable in France by up to five years' imprisonment and fines in France.

The path for the prosecution of Ventura was cleared after the Vatican lifted his immunity in July 2019. His trial in absentia was held Nov. 10.

The sentence imposed Dec. 16 was more lenient than the suspended 10 months the prosecution had sought.

Doumic said her client had "explained himself multiple times," over what the defense has described as "minor" accusations.

But the court decision "shows he wasn't heard, despite a 7-hour hearing on gestures which are simple, light," she said after the verdict.

Five men alleged that they had suffered Ventura's "hands on the buttocks" during his public diplomatic duties in France. The case erupted in February 2019 amid multiple sex scandals affecting the Catholic Church. 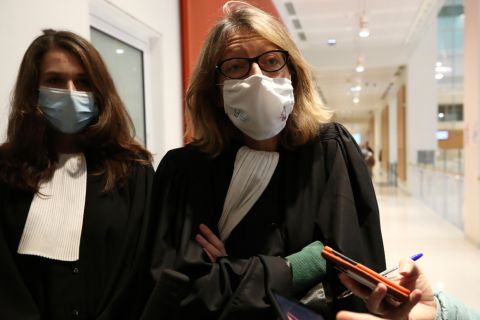 Among the accusers was a former seminarian, Mahe Thouvenel, who said he was grabbed repeatedly by the clergyman when they celebrated Mass in December 2018. Another, Mathieu De La Souchere, alleged that Ventura touched his behind repeatedly during a reception at Paris City Hall.

Thouvenel said his seminary kicked him out after he filed a police complaint. Under questioning from Ventura's lawyer, he put his right hand on the top of his right buttock to show one of the spots where he was allegedly groped.

"It's violent," Thouvenel said during the trial. "It sticks in your memory."

The judge said at the time that, during prior questioning, Ventura had explained his behavior by saying he had a "Latin" temperament and that there was nothing sexual about his gestures.

"These types of verdicts, when it involves a Vatican ambassador, can give other victims the courage to come forward in other cases potentially involving the church," said Antoinette Frety, a lawyer for the plaintiffs. "They know now that they will be heard no matter what the rank of the aggressor is within the church. And that's very important."

Another lawyer for the plaintiffs, Edmond-Claude Frety, said the verdict should encourage potential victims not to give up.

"It means that victims have to be brave, have to leave the silence and to talk," he said. Ventura "will not be in jail tonight, of course, but it's quite an important conviction because it means that these facts are now considered very severely by the courts."

The former envoy had produced a doctor's note saying it was too dangerous for him to travel from Rome to Paris for the November trial amid France's resurgence of the coronavirus pandemic.

Elaine Ganley in Paris contributed to this report.

Ex-Vatican envoy's trial for sex assault begins without him