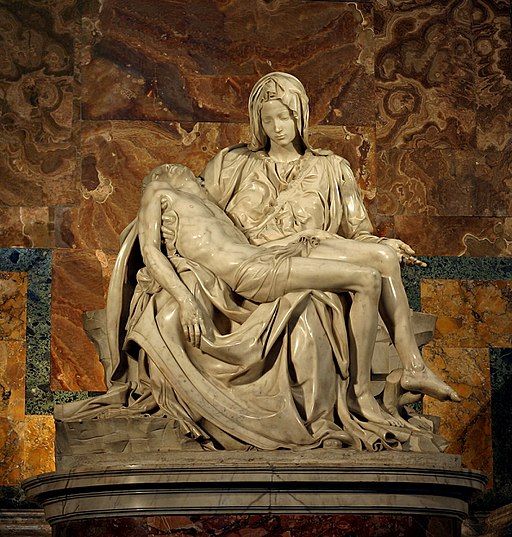 Just inside St. Peter's Basilica in Rome, to the right, is Michelangelo's arresting sculpture, the Pietà. Layers upon layers present themselves for pondering. The wonder, initially, is that a piece of Carrara marble could yield such a luminous rendering of maternal agony. The young woman is resolute. She appears utterly exhausted in this moment of dismal uncertainty. The bloodied head of a son whose unpredictable, itinerant life ended on a hill of horrors, droops beyond her right arm. Her worry and anxiety are spent. Her burden now is death, a moment of emptiness.

It is from this raw instant of humiliation, of futility and apparent abandonment — the joke in the legend proclaiming "King of the Jews" — that our hope springs. No Resurrection occurs without it.

Throughout the church in the United States, in varying degrees, people are wondering some version of: "What do we do next? What can we do?"

It is a question that often arises out of a place of agony, a disposition of futility. We all know the phrase, "people of God." And we mouth the familiar, "We are the church." But in this instance, in our moment of dismal uncertainty, what does that mean?

The questions arise, of course, in the wake of the latest round of sex abuse revelations, new disclosures of mostly old patterns of criminal behaviors and the cover-up of those crimes by men called our bishops, men we trusted implicitly.

In a half turn away from the Pietà toward the front of the massive basilica, a sense of displacement takes hold. Without oversimplifying or reducing a complex reality to caricature, the fact is that at one level the edifice contains a telling narrative.

From the enormous and ornate baldachin, the canopy above the papal altar, with its four "colossal, twisted columns, splendidly fluted" in the Vatican's explanation, to the equestrian statue of Emperor Charlemagne and a statue of Constantine at the rear of the church, to the 26 monuments to popes, a dissonance sets in. The floor contains markings showing how much larger the basilica is than the largest churches in the world. The Vatican description boasts that the vault is equivalent to a 15-story building.

How did we get from the Pietà to the rest of it? What Gospel was followed to move from the abject and dispossessed alienation of a first-century execution to the excesses of a Renaissance court?

No matter how well-intended and how sincerely devoted to God's purposes the grandeur attempts to express, it is also apparent that the embellishments of some 500 years have created a memorial to papal and clerical culture that make the Pietà an outlier.

There is a wonderful line in Pope Benedict XVI's second volume on Jesus: "This reversal of proportions is one of God's mysteries. The great — the mighty — is ultimately the small."

The church is being made small in this current, major humiliation. The bishops themselves are no longer hedging, acknowledging publicly that they've lost their moral credibility. In many ways the Catholic community has become a point of ridicule, living proof for some that faith is an absurdity and that religious practice is tantamount to engaging in a fraud that ultimately is dangerous to children.

The grandeur — the gold and silk and remnants of royal culture and behavior that have woven themselves into our practice — now feels cheap and tawdry, excess horribly out of place in this moment of humiliation.

What can we do? Having been humiliated, how do we now live in authentic humility?

We can construct our own new laments. No permission needed. We need only know how to pray, how to read the Psalms, how to understand that nugget of Pauline insight: "Where sin abounds, grace abounds all the more." While the bishops continue to negotiate their way to some settlement with this awful scandal, our work may be to find the path from transaction to transformation.

We need new prayers of grieving, new liturgical symbols that express the community's distress at this moment.

Perhaps we should regularly pray Mary's stirring Magnificat, particularly the lines: "He has shown might with his arm, dispersed the arrogant of mind and heart. He has thrown down the rulers from their thrones but lifted up the lowly. The hungry he has filled with good things; the rich he has sent away empty." The prayer, so often viewed as a prophetic cry relating to those outside the fold, is apt today as an ad intra assessment.

In that prayer we can imagine, with priests who care to join us, a new way of being church, new ways to express our faith that have to do with lifting up the lowly and filling the hungry with good things. Becoming, as Francis has said, a church of the poor and the marginalized, of those who are the pietà of this era, provides a path beyond the monumental betrayal of the abuse crisis.

We are a community shaped by and responsive to symbols. The bishops, at a global level, might do well to have the papal chair in St. Peter's moved to the chapel at the right rear of the basilica and the Pietà moved in its place, front and center, our new focus of meditation.

A version of this story appeared in the March 8-21, 2019 print issue under the headline: Pietà: our new focus of meditation .

Editorial | Pietà offers meaning amid the betrayal of the abuse crisis