by Jonathan Luxmoore
Accountability
World
This article appears in the The McCarrick report feature series. View the full series. 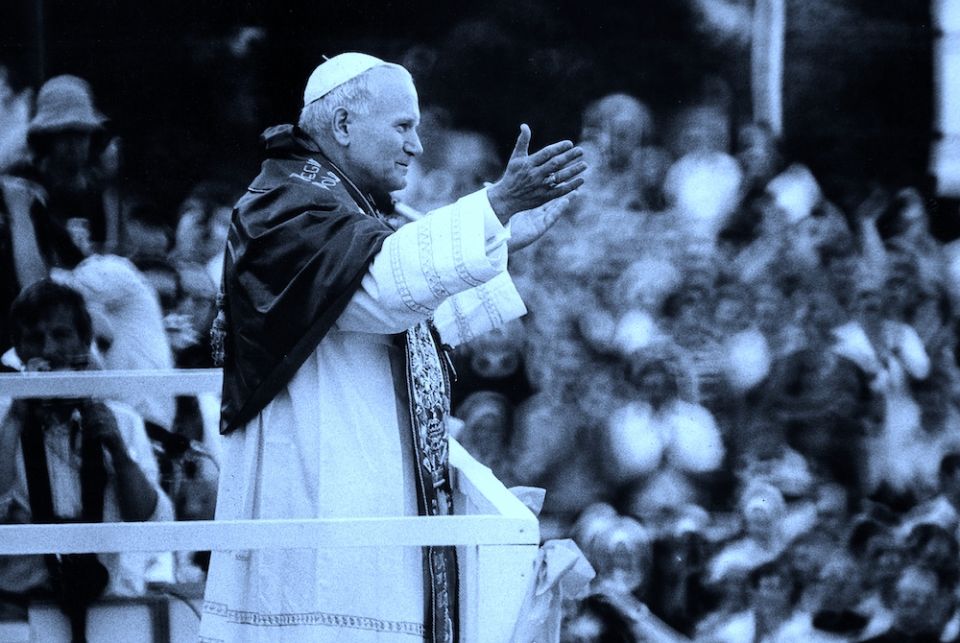 St. John Paul II greets throngs of Poles waiting for a glimpse of their native son at the monaster of Jasna Gora in Czestochowa during his 1979 trip to Poland. He died April 2, 2005. (CNS/Chris Niedenthal)

Warsaw, Poland — When a long-awaited report on the case of disgraced ex-Cardinal Theodore McCarrick was published by the Vatican Nov. 10, it had a special resonance in Poland.

The extensive document highlighted mistakes by the last three popes, but particularly questioned judgments by St. John Paul II, a figure long considered beyond criticism in his homeland.

The role of the Polish pontiff's long-serving secretary, retired Cardinal Stanislaw Dziwisz, had been examined a day earlier by a Polish TV documentary, citing damning evidence that he connived in covering up sex abuse by Catholic clergy both in Rome and in Poland.

The revelations come during a hot autumn for Poland's predominant Catholic Church, already facing multiple abuse-related investigations, the disgracing of its oldest cardinal and angry protests over its backing for new curbs on abortion.

How the church reacts now will be closely watched.

"Of course, these scandals concern the hierarchy rather than the Catholic community, which includes plenty of devout, honest people," explained Malgorzata Glabisz-Pniewska, a senior Catholic presenter with Polish Radio.

"But ordinary Catholics are deeply affected, since [the scandals] testify to grave shortcomings and reflect the church's wider attitude," she said. "That people are raising their voices and demanding the truth has come as a shock — especially for older church leaders who can't accept or understand what's happening."

The Vatican report details how John Paul II made McCarrick archbishop of Washington, D.C., in 2000, raising him to cardinal a year later, after being warned against the appointment by trusted counsellors on both sides of the Atlantic. 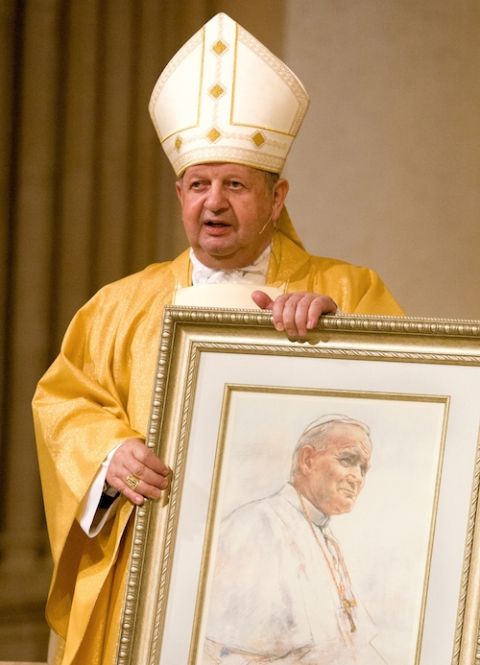 It contains 45 references to Dziwisz, who first met McCarrick while visiting New York with the then-Cardinal Karol Wojtyla in 1976, and later handled correspondence with him — including a key August 2000 letter from New York Cardinal John O'Connor in which McCarrick denied allegations of inappropriate behavior made against him.

The role of the former papal secretary in the McCarrick case had already been scrutinized by Poland's TVN-24 channel, in "Don Stanislao: the other face of Cardinal Dziwisz," which detailed how he had also ignored complaints against subsequently convicted local priests after becoming Archbishop of Krakow in 2005, despite letters of warning from a prominent whistleblower, Fr. Tadeusz Isakowicz-Zaleski.

The retired cardinal had dismissed the charges, citing his four decades' "service to the church, pope and Poland" as a self-evident counterweight.

Responding to the documentary in a statement, Dziwisz said he counted on a "transparent investigation" and "proper presentation of the facts," adding that care for those harmed was now of "supreme value."

Meanwhile, the president of the Polish bishops' conference, Archbishop Stanislaw Gadecki, said the Polish church was grateful to Dziwisz for his "service alongside St. John Paul II." But Gadecki also suggested the Vatican could create a commission to investigate the allegations, saying he hoped such a group could clear up "any doubts" presented in the film.

Blazej Kmieciak, who heads a Polish State Commission on Pedophilia, set up last summer, said he would be ready to investigate the claims against Dziwisz.

Protesters defied lockdown restrictions and chanted "coward" and "hypocrite" outside the cardinal's Krakow curia and residence, which were placed under police guard, as a group of left-wing legislators tore up pictures of Dziwsz in the Polish parliament and called on prosecutors to examine the bishops' conference archives for further evidence of abuse cover-ups.

Marcin Przeciszewski, director of the Polish Church's Catholic Information Agency (KAI), thinks the latest revelations reveal the "absolute determination" of Pope Francis to "cleanse the Church of its dirt," ensuring "neither age nor health saves anyone from justice."

"We must establish what was happening in the papal court, especially among John Paul II's closest entourage," Kobylinski told TVN-24 Nov. 10.

"This is especially needed for the last 10 years of the Polish pope's pontificate, when John Paul II was sick and weak, and many decisions were really being taken by those around him," said the professor.

Fears are mounting that the previously revered image of St. John Paul II could now be damaged in his own native country, where his name is emblazoned on streets and squares nationwide.

Poland's Catholic bishops lobbied hard for his early beatification and canonization, but were rebuffed when they petitioned the Vatican and fellow-prelates worldwide in October 2019 to have him elevated still further as a Doctor of the Church and patron saint of Europe.

Although John Paul has been largely untouched by controversies surrounding the Polish church — over its infiltration by communist-era agents, shady property deals and abuse accusations — this could now be changing. 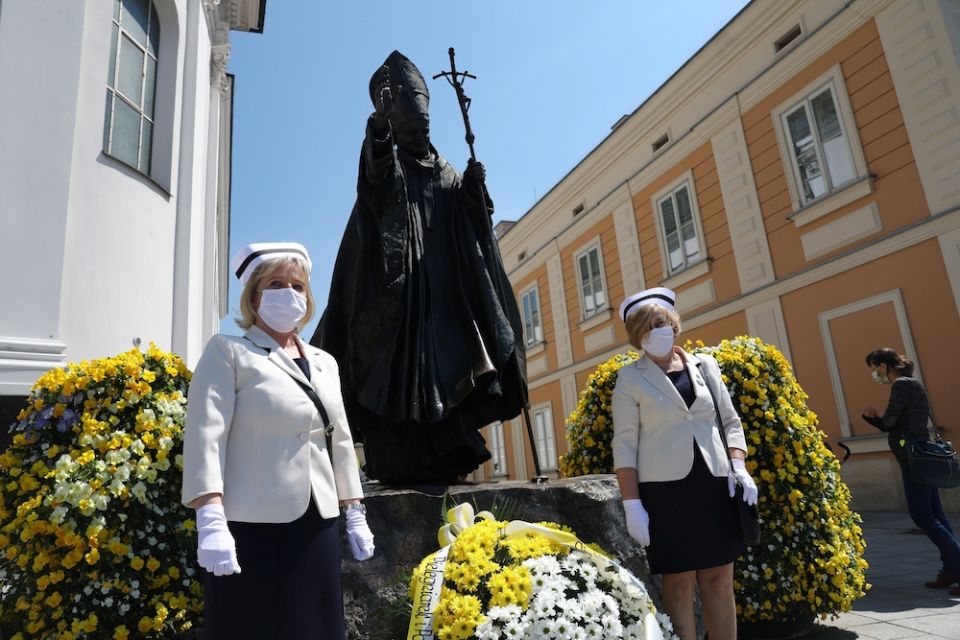 Nurses in protective masks stand in front of a statue of St. John Paul II in Wadowice, Poland, May 18, during a ceremony to commemorate the 100th anniversary of the late pope's birth. (CNS/Agencja Gazeta via Reuters/Dawid Zuchowicz)

In October, Francis accepted the resignation of Bishop Edward Janiak of Kalisz, after claims he had violated Polish law and Vatican guidelines by brushing aside complaints against local priests. Up to 20 legal petitions are being investigated against other bishops, including Archbishop Slawoj Glodz of Gdansk, who was publicly accused by local priests a year ago of similar cover-ups.

These reached a head on Nov. 6, when a Vatican decree barred 97-year-old Cardinal Henryk Gulbinowicz, the oldest of Poland's six cardinals, from further public appearances and stripped him of the right to be buried in his own Wroclaw cathedral, after he too was implicated in abuse.

With a corrosive spotlight now fixed on 81-year-old Dziwisz, who spent 39 years at John Paul's side, even Catholic supporters fear the canonized pontiff's record could be challenged.

Dziwisz's appointment as Archbishop of Krakow after John Paul II's death was widely viewed as a popular gesture toward Poles by the then-newly elected Benedict XVI.

But it shocked clergy in the southern archdiocese, who doubted Dziwisz's personal authority and stature, and were unsurprised when the new cardinal drew constantly on his past links with John Paul II.

Fr. Piotr Studnicki, who heads the Polish bishops' Child and Youth Protection Office, regrets Dziwisz's answers to questions about McCarrick and other scandals and has urged Polish church leaders to cooperate closely with state and Vatican investigators.

"I'm certain failure to clear up these matters will harm the church, while also casting a shadow over John Paul II's pontificate. .... We cannot avoid asking how it was possible that people who allowed such terrible crimes got so far in the church," said the priest. 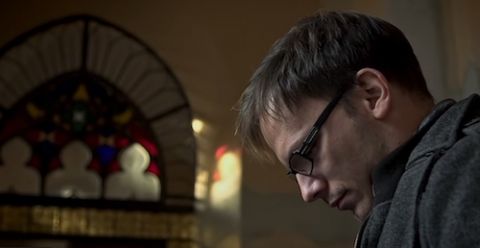 Scene from "Hide and Seek," a documentary released in May and which accuses the Polish church of continuing to cover up sexual abuse by Catholic clergy. (CNS screengrab/YouTube)

Though constantly professing loyalty to John Paul II, the cardinal has shown scant regard for some of the late pontiff's wishes, offering people relics and drops of his blood, and publishing his personal notebooks in 2014 in blatant violation of his final will and testament.

"If Dziwisz confessed to mistakes, it would mean shedding some of the personal glory he's worked to accumulate after being so long in the background," Glabisz-Pniewska told NCR.

"But he clearly took many decisions himself as the pope grew older and weaker, and there's now real concern as to why John Paul II placed such apparent trust and confidence in those around him," she said.

When Poland's Independence Day was celebrated nationwide Nov. 11, it allowed Polish church leaders a brief respite from the latest conflicts and controversies in appeals to patriotism and national unity.

But directors Marek and Tomasz Sekielski, whose much-watched 2019 and 2020 films "Just Tell No One" and "Hide and Seek" laid bare multiple abuse cover-ups in the Polish church, are promising new revelations in a follow-up on John Paul II.

Meanwhile, Kmieciak's State Commission on Pedophilia says it plans to include "all gaps, transgressions and open questions" relating to the church in its first major report next July.

With those long-hostile to the pope and Vatican now enjoying a receptive public mood for the first time, and those long fearful of criticizing the church now at last feeling empowered to do so, the Polish church faces tough challenges.

"The church could set up a truth commission — but there's no tradition of independent and trusted professional experts here, so any such commission would merely be expected to defend the church," Glabisz-Pniewska told NCR.

"Meanwhile, it'll be easy for John Paul II's supporters to say he was too tired and sick in his final years to exert full control, and for Dziwisz and others to insist they had his confidence and acted in good faith for the good of the church," she said. "Apportioning personal responsibility in such circumstances will be difficult."

A version of this story appeared in the Nov 27-Dec 10, 2020 print issue under the headline: Polish church reels from John Paul II scandal .