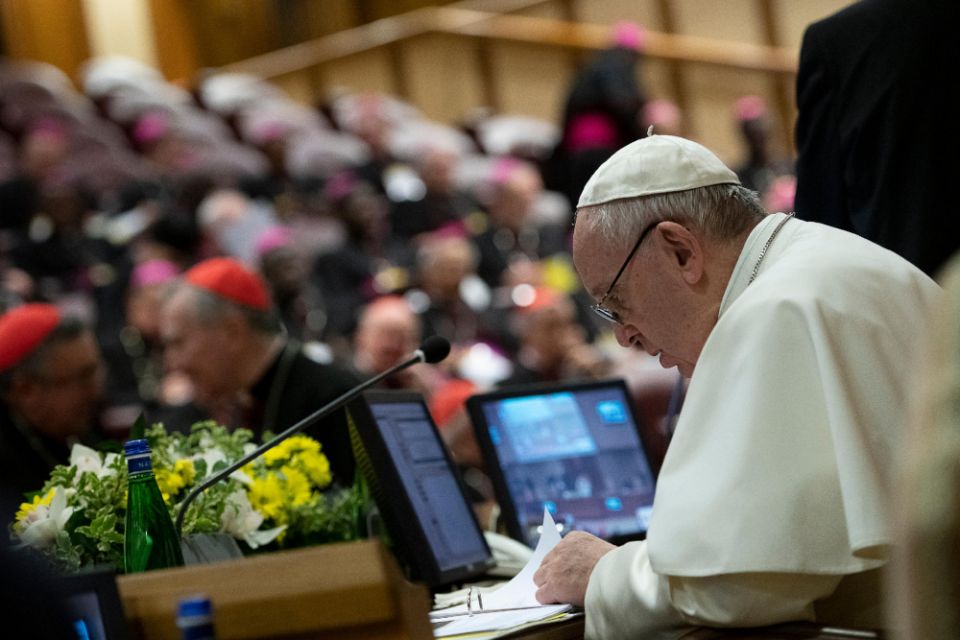 Pope Francis reviews papers during a meeting on the protection of minors in the church at the Vatican in February 2019. (CNS photo/Vatican Media)

Vatican City — Pope Francis on April 29 called on Catholic bishops' conferences to create special centers to welcome victims of clergy sexual abuse, warning that the faithful would continue losing trust in the church hierarchy without more transparency and accountability.

Francis urged his sexual abuse advisory commission, which he created in 2013 as an ad hoc body and recently fully integrated into the Vatican structure, to help bishops' conferences around the world establish survivor welcome centers where victims could find healing and justice.

And he called for the commission to conduct an annual audit of what is being globally done by the Catholic hierarchy, and what needs to change, to better protect children and vulnerable adults from abuse.

"Without that progress, the faithful will continue to lose trust in their pastors, and preaching and witnessing to the Gospel will become increasingly difficult," he warned.

It was the latest effort by the Argentine pope to try to address the ongoing credibility crisis in the Catholic Church over its legacy of priestly sex abuse and cover-up, and the Vatican's often tone-deaf response to the trauma suffered by victims.

Francis created the commission, known as the Pontifical Commission for the Protection of Minors, in the first year of his pontificate to advise the church on best practices to protect minors and prevent abuse. But its limited mandate frustrated survivors, its outsider efforts at accountability hit resistance and one of its biggest initial recommendations - a special Vatican tribunal to prosecute bishops who covered up for pedophiles - went nowhere.

But Francis, who himself has a mixed record both as pope and archbishop of Buenos Aires, has sought to breathe new life into the commission. In his recent reform of the Vatican bureaucracy, he made the commission part of the newly named Dicastery for the Doctrine of the Faith, the Vatican office that processes clergy sex abuse cases around the world.

In his speech to commission members on April 29, Francis assured them that by integrating them more into the Vatican bureaucracy he was by no means attempting to curb their freedom or independence or limit their mandate - quite the opposite, he said.

"It is your responsibility to expand the scope of this mission in such a way that the protection and care of those who have experienced abuse may become normative in every sector of the church's life," he said.

The creation of special welcome centers for victims, if effective, could help answer a long-standing complaint from abuse survivors who often report negative experiences with the church hierarchy when they report a priestly abuser. Often they are left in the dark about the progress of their cases and left on their own to try to heal.

Francis in 2019 passed a new church law explicitly saying survivors have the right to know the outcome of their cases, and he also lifted the pontifical secret that covered such investigations to facilitate transparency with victims as well as law enforcement agencies.

But advocates for victims say the church still has a long way to go to adequately address victims and the long-term trauma they experience.

"The testimony of the survivors represents an open wound on the body of Christ, which is the Church," Francis said.

Working paper for synod on the family due this month