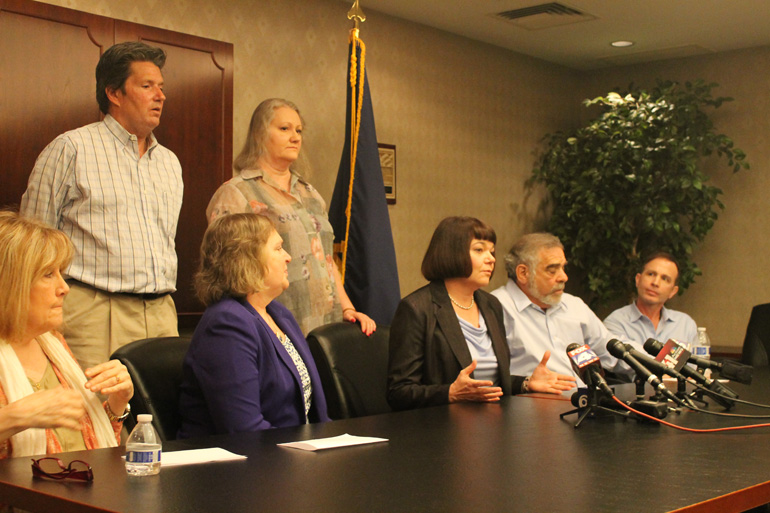 Survivors of sex abuse and their attorneys Rebecca Randles (center) and Sarah Brown (left of Randles) shared their reactions to Bishop Robert Finn’s resignation as head of the diocese of St. Joseph-Kansas City, Mo., during a press conference held April 21 in mid-town Kansas City. (NCR/Brian Roewe)

Emotions ran high among Catholics in the Kansas City-St. Joseph, Mo., diocese as word spread that Bishop Robert Finn had resigned Tuesday morning. The reactions ranged from sadness and disappointment among Finn’s supporters to relief among his critics.

Nearly all who spoke to NCR talked of the pain of the last few years, and all expressed a need for the diocese to enter a time of healing.

Fr. Pat Rush, pastor at Visitation Parish, echoed the message of Kansas City, Kan., Archbishop Joseph Naumann, named administrator of the neighboring diocese, in hoping the new phase “will be a time of grace and healing for the diocese.”

“We all know the Vatican can work slowly, and I hope it does not work slowly because I think we have been adrift. And I think we’ll continue to be adrift until such a time as we have a bishop that we can kind of all feel that he has a goal of supporting and strengthening the communion of the church,” Rush told NCR.

Rush was one of about a dozen priests and parishioners -- supporters, critics and neutral people -- interviewed in September 2014 during an apostolic visitation into Finn’s leadership of the diocese. Those interviews led to a report to the Vatican’s Congregation for Bishops.

Finn's leadership has long been under question in the Missouri diocese, at least since his September 2012 conviction of a misdemeanor count of failing to report suspected child abuse in the case of a now-former diocesan priest who was producing child pornography.

Outside Our Lady of Good Counsel Church in midtown Kansas City, parishioners leaving noon Mass Tuesday expressed a deep sadness to see Finn go. The parish was designated as the diocesan Shrine to the Divine Mercy in 2005 in one of Finn’s first acts as ordinary of the diocese. Finn attended Divine Mercy Sunday services there at 3 p.m. April 12, likely his last act of public worship before flying to Rome to meet Cardinal Marc Ouellet, the prefect of the Vatican's Congregation for Bishops, to discuss his resignation.

“I have confidence in my faith and the church and the Holy Father. It’s just sad because I know him well, and he’s a very good and holy man,” said Claude Sasso, who as Finn’s vice chancellor for catechesis and evangelization since 2006 was Finn’s longest-serving officer.

“I think he did many good things for the church in his service. He’s a very humble man. He’s a human being, he’s not perfect. Nobody’s perfect. We’re all sinners,” Sasso told NCR.

One parishioner said Finn was “betrayed by Judases.” Bob Vogt, a parishioner of 30-plus years, called him a good bishop and shepherd throughout the “media’s persecution of Christians.” He also praised Finn for bringing to the diocese 30 new seminarians, and about 10 this year -- the most it has seen in years.

Steve Connelly, an affiliate of Justice for Bishop Finn -- an online effort to defend Finn throughout his “unjust indictment,” according to the website -- said he didn’t know all the intricacies of how the Vatican handled Finn’s resignation but said it “shouldn’t have been prompted by people who want him gone.”

Connelly described Finn’s greatest strength but biggest challenge to the diocese as his devotion to the church’s traditional teaching, which was met with much resistance from a diocese that “for many years was not on the right track in terms of its faith.”

“I know a lot of folks who really didn’t like him, but they never got to know him. They only knew what they would read on websites or certain newspapers, and that’s not a good way to get to know someone,” he said.

Mercy Sr. Jeanne Christensen, who served as the diocesan victims' advocate from 2000 to 2004, was director of the diocese’s Peace and Justice Office from 2000 until 2006, when she resigned after Finn cut her staff and budget in half. She said that because of his divisive leadership style, “a lot of people have suffered under his time here in the diocese.”

“There’s sort of a sadness our diocese has to be in that kind of news,” she said. “Kansas City used to be a ‘everyone wanted to come to our diocese’ kind of place, and it’s not that anymore. I think we need to begin to build that again, build a future of hope and healing.”

For many victims of clergy sexual abuse, it was “a day of closure,” said Rebecca Randles, an attorney who has represented more than 100 sexual abuse cases against the diocese.

“Bishop Finn has been the symbol of bishops who have failed to protect children because of his criminal conviction. So it is a very symbolic move for him to be asked to resign by Pope Francis, and we hope that this is an indication that Pope Francis is going to be proactive where children’s safety is concerned,” she told NCR.

The situation involving former priest Shawn Ratigan, she said, exemplified one where the policies and procedures to protect children were in place but not enforced. In May 2011, Ratigan was arrested for possession and production of child pornography, and in September 2013, he was sentenced to 50 years in prison.

Connelly of Justice for Bishop Finn called the Ratigan case “an unfortunate incident.”

At a press conference Tuesday in midtown Kansas City, five survivors of clergy sexual abuse expressed mixed feelings on Finn’s resignation. While some voiced delight, others spoke of an “uneven reaction” to the news during a yearslong process that has had many ups and downs.

Phil Pisciotta, co-leader of the local chapter of the Survivors Network of those Abused by Priests, called the day “a victory for the pew-sitting Catholics.”

“Catholics can’t elect who is in charge of them ... but they have a voice in how long that person is going to stay there. And they can speak out with their mouth, and they can shut up with their pocketbooks and their wallets until change has happened,” he said.

For Teresa White and Bill Kopp, they saw an opportunity for a fresh beginning.

“This represents for me the beginning of a long journey and a long battle that has been hard fought and hard won, but it’s just the beginning of what needs to be done to protect children in the future,” White said.

“We’ve now been given a window,” Kopp said. “What can we do with it as far as going forward?”

While Christensen said this was a “powerful” day for the victims and those who worked with victims, she added that above all, she hopes Finn “finds whatever it is he needs to get on with his life, and that he is never a bishop in another diocese ever again.”

Daniel Fowler, a local attorney interviewed as part of the apostolic visitation, said news of Finn’s resignation felt like “a big cloud has been removed from the diocese.” The focus now, he said, is on “healing and moving forward in ways that we could not do when Bishop Finn was here.”

Rush said the resignation sent a signal “that the Vatican wants a change in the way the diocese has been led.” As for what skills the diocese needs, he said it “calls for a leader who has pastoral sensitivities ... who believes in the teachings of the Second Vatican Council ... who knows how to listen.”

Efforts toward healing and communion have already begun.

Fr. Charles Rowe, vicar general of the diocese, has invited all priests of the diocese to a meeting with Naumann on Thursday afternoon at the downtown chancery.

“Archbishop Naumann recognizes that this is a critical period for our local Church and your effective collaboration is crucial for the welfare of the faithful.  He regards engagement with you as a top priority,” Rowe wrote.

While priests gather at the chancery Thursday, Catholics are invited to gather at 2:30 p.m. in their home churches “to simply pray together for our diocese and our parishes,” said Fr. Chuck Tobin, a senior priest in the diocese, in an email broadcasting the invitation.

He suggested that the small gatherings read “the beautiful Gospel for this coming Sunday about ‘I am the Good Shepherd,’ perhaps [sing] a song of reconciliation if possible” and offer together the prayers of the faithful, “maybe even some prayers for the process of choosing a new bishop.”

“It seems like it is a sacred moment for us as the People of God to pray for one another, to pray for our leaders and to ask the grace of the Holy Spirit upon us during this critical time,” Tobin wrote in his email.

“May a loving God walk with us during these days ahead,” he wrote.