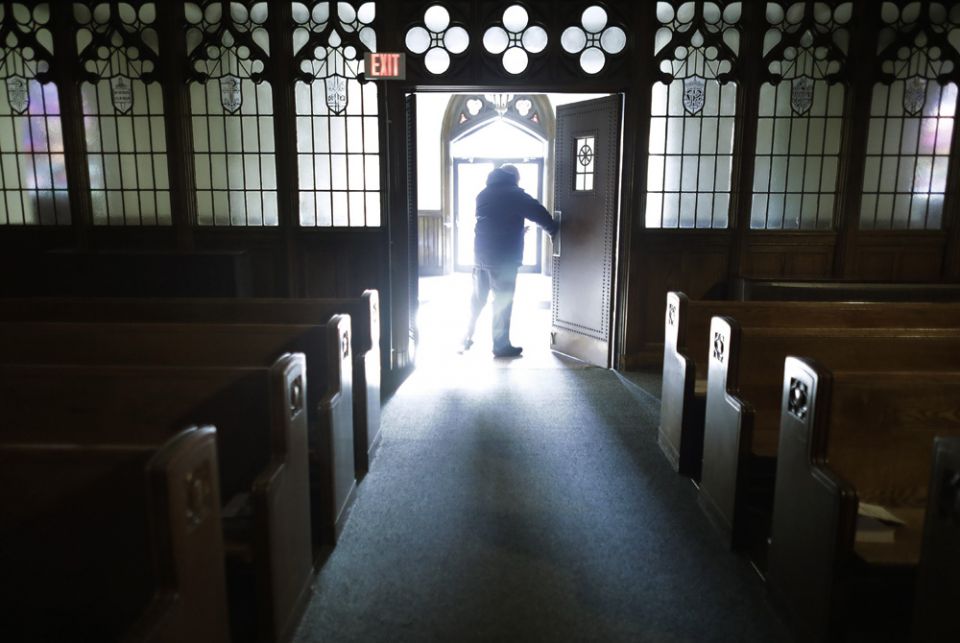 Fr. Mark Stelzer, administrator of St. Jerome's Church, in Holyoke, Massachusetts, opens doors to the Catholic church Nov. 9 before offering Mass. Stelzer lives alone in the rectory at St. Jerome's while serving as spiritual leader to the 500 families in the Catholic parish. (AP/Steven Senne)

Chicopee, Mass. — More than a century ago, waves of Catholic immigrants from Ireland, Poland and Quebec settled in Chicopee and other western Massachusetts mill towns, helping build churches, rectories and schools to accommodate their faith. Today the priests leading those churches are under siege due to stresses, challenges and sex abuse scandals complicating their lives and those of their fellow priests across the United States.

Fr. Mark Stelzer is among those trying to persevere. He's a professor at a Roman Catholic college in Chicopee, and its chaplain. He travels frequently to out-of-state events organized by a Catholic addiction-treatment provider, recounting his own recovery from alcoholism.

Last year, his busy schedule got busier. Amid a worsening shortage of priests, the Diocese of Springfield named him administrator of a parish in Holyoke, Chicopee's northern neighbor, where he lives alone in a mansion-sized rectory while serving as spiritual leader to the 500 families of St. Jerome's Church.

"I'm at an age where I thought I'd be doing less rather than doing more," said Stelzer, 62.

This is the ripple effect the church's long-running sexual abuse crisis has had on many honorable priests: heavier workloads, increased isolation as multi-priest parishes grow scarce and an erosion of public support. It has led some to question the leadership of their bishops.

Many priests see trauma firsthand. Some minister in parishes wracked by gun violence; others preside frequently over funerals of drug-overdose victims.

Stelzer loves being a priest, yet he's frank about the ever-evolving stresses of his vocation that leave him nostalgic for the priesthood he entered in 1983.

"It was a lot simpler then," he said. "There's a real longing, a mourning for the church that was — when there was a greater fraternity among priests, and the church was not facing these scandals that are now emerging every day."

Stelzer's concerns echoed those of other priests, and some of their psychological caregivers, who were interviewed by The Associated Press. 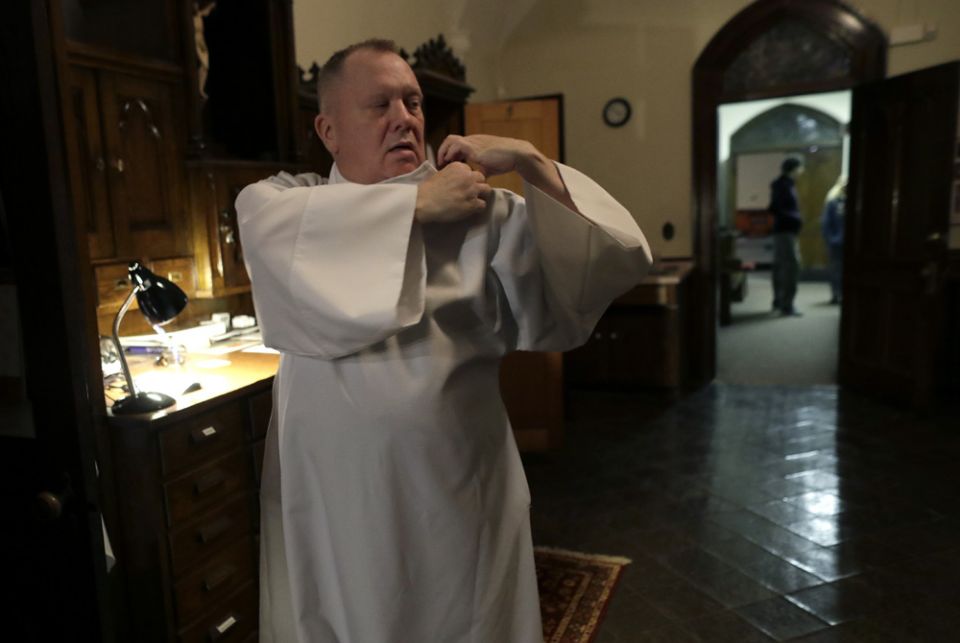 Burnout has been a perennial problem for clergy of many faiths. But Thomas Plante, a psychology professor at California's Santa Clara University who has screened or treated hundreds of Catholic clerics, sees new forms of it as the sex abuse crisis persists and many parishioners lose trust in Catholic leadership.

"You're just trying to be a good priest and now everyone thinks you're a sex offender," he said. "If you walk in a park with your collar on, people think you're on the lookout for children. ... Some have been spat upon."

The Springfield Diocese, like many across the U.S., has a long history of sex-abuse scandals. In the early 1990s, priest Richard Lavigne was defrocked and several of his victims received cash settlements. In 2004, a grand jury indicted Thomas Dupre on two counts of child molestation soon after he resigned following a 13-year stint as Springfield's bishop.

Stelzer had hoped the abuse crisis was abating but it resurfaced dramatically over the past two years. Abuse allegations led to former Cardinal Theodore McCarrick's ouster from the priesthood and a Pennsylvania grand jury report asserted that about 300 priests had abused at least 1,000 children in the state over seven decades.

"It opened up an old wound and now we're back to ground zero," Stelzer said in an interview at the  College of Our Lady of the Elms.

The wound is self-inflicted, said Fr. Philip Schmitter, 74, who has served for 50 years in Flint, Michigan. His stance endears him to an African American community where he lived in public housing for three decades to maintain close ties.

"This cover-up, this 'Let's protect the institution' was just a heinous, utterly unchristian kind of behavior," he said. 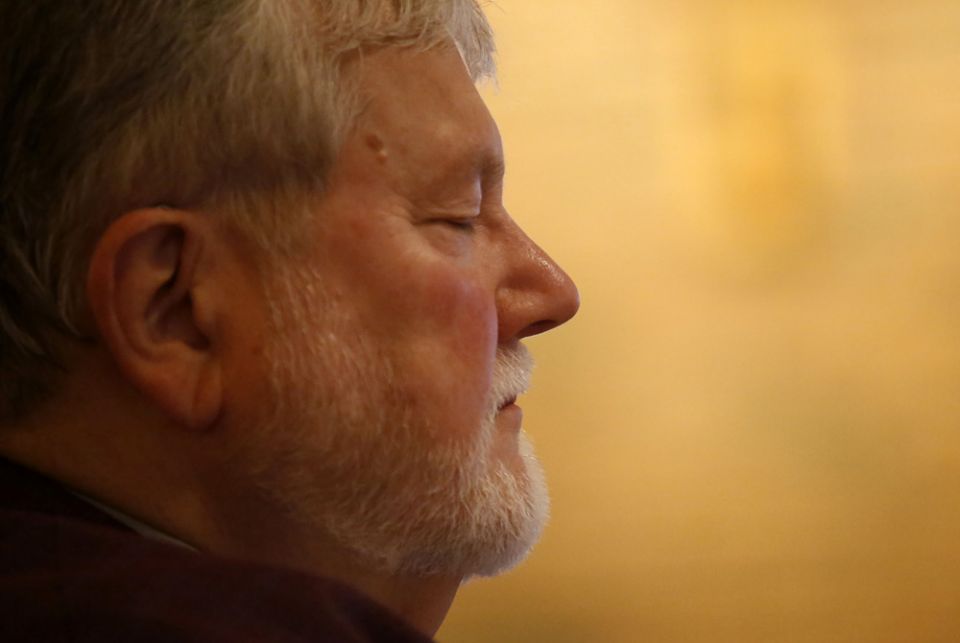 Fr. Philip Schmitter meditates Dec. 1 before preparing for a celebration of Mass at Christ the King Catholic Church in Flint, Michigan. Schmitter, 74, says that meditating in the morning and evening has helped keep him calmer and has even lowered his blood pressure. He has served the beleaguered city of Flint for 50 years, often inserting himself into social justice issues, including those related to race, environment and poverty. (AP/Martha Irvine)

Two miles north of Stelzer's  campus, on a recent Sunday, Fr. William Tourigny was getting ready for the 4 p.m. Mass — his fourth and last of the day — at  Ste. Rose de Lima Church.

When Tourigny, now 66, was ordained in 1980, the Springfield Diocese had more than 300 priests serving 136 parishes. Since then, the ranks of priests have shrunk by more than half and nearly 60 of the parishes have closed. For Tourigny, it's meant many more funerals to handle, including dozens related to drug overdoses and heavy drinking.

Even his own family has been scarred: Tourigny says the 27-year-old daughter of his first cousin was killed in circumstances related to her drug habit.

"But for her addiction, she was a wonderful mother," Tourigny said.

Tourigny says he's worked nearly 40 years without a real vacation. For years, he's had therapy sessions, which he describes as "crucially important," and he strives to minister compassionately without being engulfed in the emotions of those he consoles.

"I can share their pain but I can't enter into it," he said. "I'd be overwhelmed by grief."

With 2,500 families, Tourigny's parish is faring relatively well with membership and finances. Yet Tourigny says many Catholics now mistrust the church hierarchy because of the abuse scandals.

"I was ordained at a time when the church was so alive — there was so much optimism," he said. "Then things began to change quickly. ... The church has lost credibility and it's hard to get credibility back again." 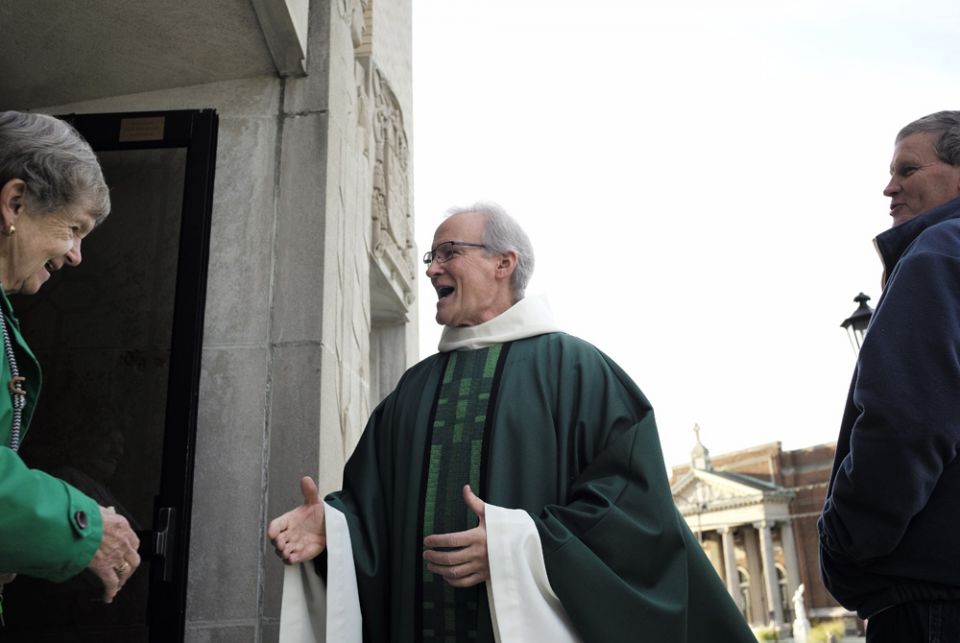 Plante, the California psychologist, says even priests deeply devoted to their work are upset.

"A lot are angry at bishops and the institutional church for screwing up — a lot of them feel they've been thrown under the bus," he said. "They're also concerned that one of these days someone will accuse them of misbehavior, even if they've done nothing wrong."

Since 1985, according to Georgetown University  researchers, the Catholic population in the U.S. has risen by nearly 20%, but the number of priests has plunged from more than 57,000 to under 37,000. It means more work for priests, and more priests living alone rather than with colleagues.

Stress, burnout, depression and addictions are among the conditions treated at  St. Luke Institute, a residential treatment center for Catholic clergy and lay leaders, in Silver Spring, Maryland.

St. Luke's president, Fr. David Songy, is a psychologist who has worked extensively with troubled priests. One growing problem, he says, is that new priests are now often assigned their own parish within three years, instead of 10 or more in the past, and may be ill-prepared to oversee finances and personnel as well as pastoral duties.

"Some of the younger people that come to us — they've been overwhelmed and weren't sure how to deal with things," Songy said. 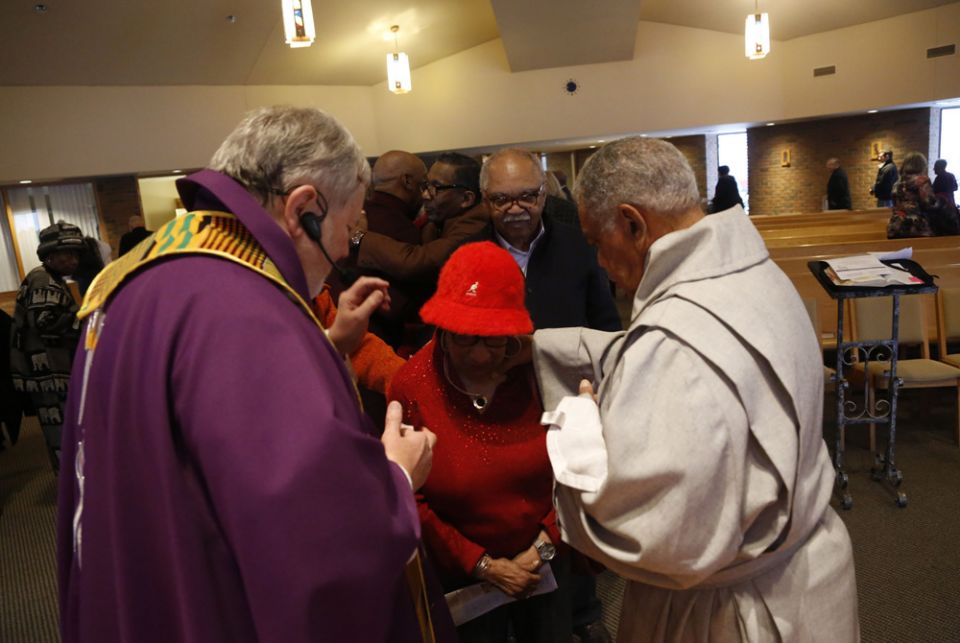 At St. Joseph's Seminary in Yonkers, New York, there's increased emphasis on screening applicants for their ability to handle stress and avoid the burnout that's now affecting some priests even early in their ministry.

"There's no doubt these men coming forward are facing what will be a very stressful life," said Fr. Thomas Berg, the seminary's vice rector.

"On top of that, in some places, you don't have a sense that their bishop supports them," added Berg. "In plenty of dioceses, priests are essentially treated as outside contractors."

Police officers, firefighters and paramedics are collectively labeled first responders. A case can be made that priests also merit that label, given how regularly they deal with trauma, especially gun violence and the opioid crisis which is besieging communities across the country.

"It's a war zone," says Pfleger, pastor at St. Sabina Church since 1981. "Doing funerals of children is the hardest for me."

Now 70, Pfleger says his health is good, and his work rewarding. Yet he says he and his colleagues risk being overwhelmed by the constant crises facing their neighborhood of Auburn Gresham.

"You realize you can't help everybody," he said.

In Brunswick, Ohio, 20 miles (30 kilometers) southeast of Cleveland, Fr. Robert Stec's priorities have been transformed, due to the scourge of opioids, since he became pastor of St. Ambrose Church in 2005.

In 2016, Brunswick's Medina County reported 20 opioid-related deaths; Stec presided over six funerals of those victims in a short span.

"We weren't trained for this in the seminary," he said.

Ministering to, ministering as 'the marginalized' theme of conference

In letter to Chileans, Francis decries church's 'culture of abuse and cover-up'