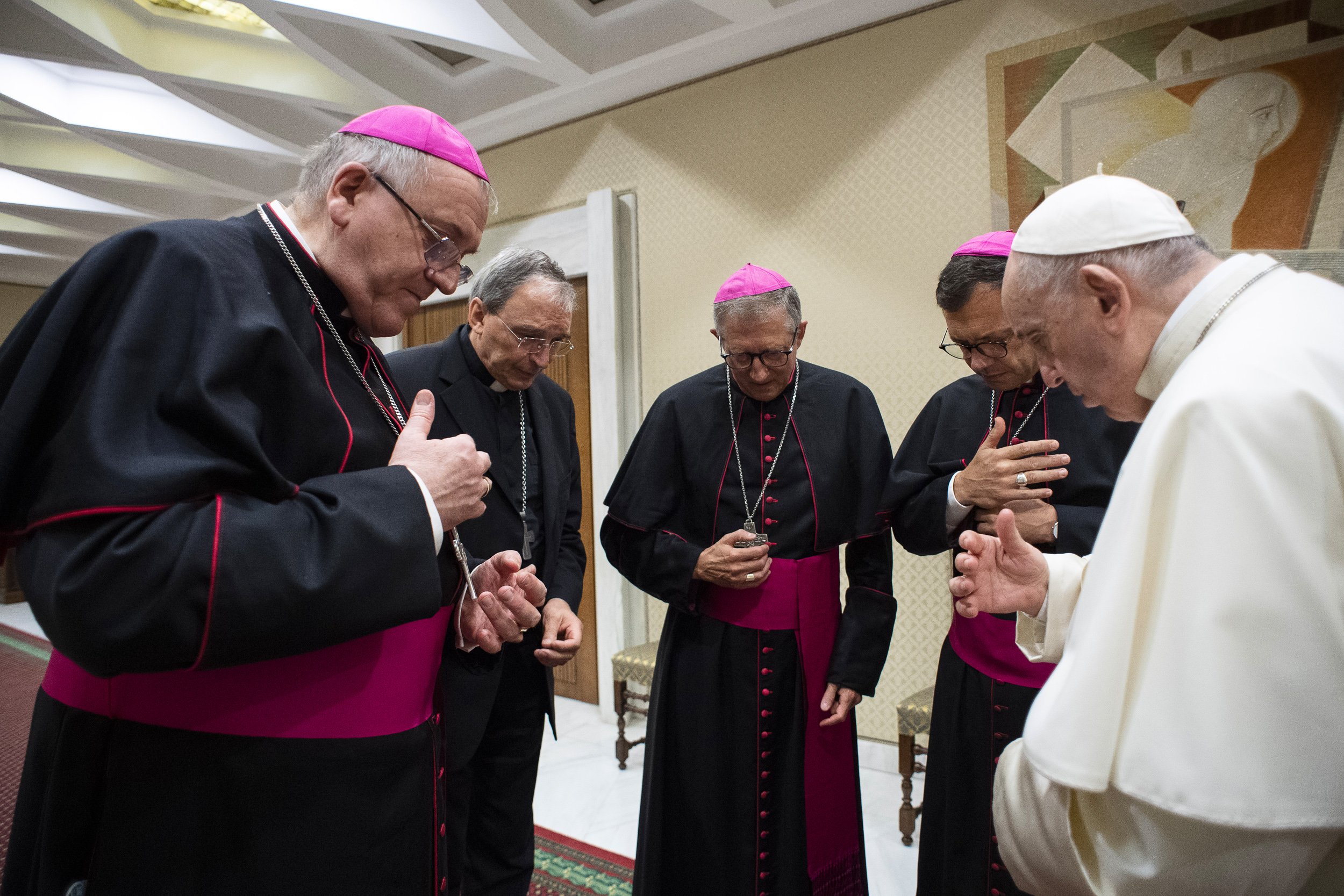 Pope Francis and four French bishops make the sign of the cross during silent prayer for the victims of abuses committed by members of the clergy, prior to the pope's general audience at the Vatican Oct. 6, 2021. The bishops were visiting Rome following a report on sexual abuse in France that estimates more than 200,000 children were abused by priests since 1950, and more than 100,000 others were abused by lay employees of church institutions. (CNS photo/Vatican Media)

A Vatican tribunal absolved a former altar boy of charges that he molested a younger boy in the Vatican’s youth seminary, ruling Wednesday in the first clergy sexual abuse trial to be heard by the pope’s criminal court.

The three-judge panel acquitted Rev. Gabriele Martinelli of some charges and ruled others couldn’t be punished or allegedly occurred too long ago. The former rector of the seminary, the Rev. Enrico Radice, was similarly absolved.

In a statement, the tribunal said it had essentially confirmed that there had been a sexual relationship between Martinelli and the alleged victim, L.G., but no proof that L.G., who was just seven months younger, had been forced into it.

The case concerned the closed world of the St. Pius X youth seminary, a palazzo inside the Vatican walls just across the street from where Pope Francis lives. The seminary is used as a residence for boys aged 12 to 18, who serve as altar boys at papal Masses in St. Peter’s Basilica.

The scandal over alleged abuse in the residence erupted in 2017 when former altar boys went public with allegations of misconduct by Martinelli and cover-up by the seminary superiors. Their accusations greatly undermined Francis' pledge of “zero tolerance" for abuse, since the acts allegedly occurred on Vatican territory.

Martinelli had denied he molested L.G., saying the allegations were unfounded, implausible and the fruit of “jealousy” by other seminarians because he was eventually ordained a priest. Radice denied knowing anything about abuse or of impeding the probe.

During the trial, some former seminarians had testified about a homophobic environment in the residence and about younger boys being bullied. Others, however, testified that the boys were happy and that the rector checked the dorms at night and never heard or saw any abuse.

Rita Claudia Baffioni, attorney for Martinelli, said the tribunal rightly saw contradictions in the prime witness’ testimony, a roommate of L.G. who said he saw sexual acts in the dorm room.

Agnese Camilli, representing Radice, said the verdict showed her client was an upstanding priest who always looked out for his students.