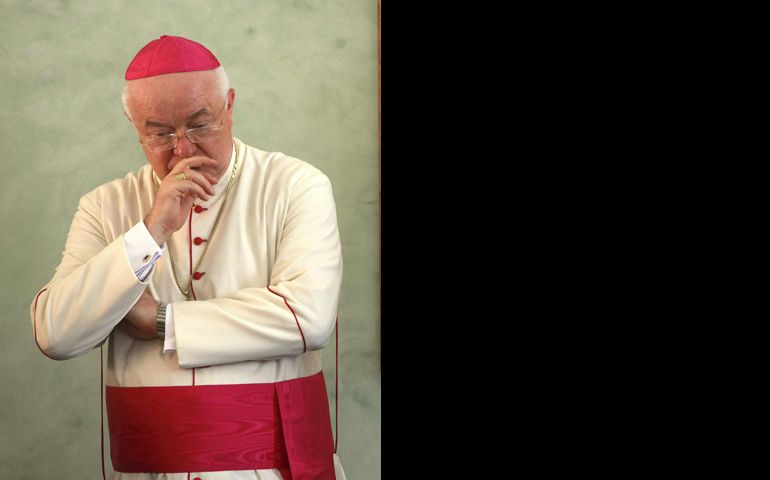 The Vatican said Monday that its former ambassador to the Dominican Republic, who was defrocked in June for sexually abusing children in the Caribbean nation, has also been stripped of his diplomatic immunity and could face extradition once he has exhausted his appeals in the church courts.

The Vatican's decision to quietly recall Jozef Wesolowski to Rome last year to face charges there rather than in the Dominican Republic prompted an outcry and, critics said, undermined Pope Francis' vow to get tough on clerical abusers, no matter who they are.

The Wesolowski saga was recounted in detail on Sunday in a front-page story in The New York Times, which prompted a response late Monday from the Vatican's chief spokesman, who insisted there was no cover-up and that the Vatican had acted "without delay and correctly."

Jesuit Fr. Federico Lombardi said Francis has been "duly and carefully informed" of the status of the Wesolowski case and wants to address it "justly and rigorously."

"We must finally state that since former nuncio" -- the Vatican title for an ambassador -- "has ended all diplomatic activity and its related immunity, he might also be subjected to judicial procedures from the courts that could have specific jurisdiction over him," Lombardi said.

What that could mean for Wesolowski is unclear. The Vatican does not have an extradition agreement with the Dominican Republic, though Italy could decide to try or extradite him if he leaves the confines of the 108-acre Vatican City State.

In June, the former archbishop was spotted by a Dominican prelate as he was strolling around Rome's historic district. "The silence of the Church has hurt the people of God," the bishop, Victor Masalles, wrote in a tweet reporting the sighting.

Authorities in Wesolowski's native Poland have been seeking his extradition there, as well.

Also complicating matters is the fact that, as Lombardi noted Monday, Wesolowski has appealed his defrocking. He said that appeal would be judged "without delay" and is expected to be resolved by October, which is unusually speedy by Vatican standards.

At that point, the "punitive procedure" of the Vatican's "civil judiciary departments" -- which are separate from the canonical church courts that generally govern matters related to clerics and the sacraments -- would begin. It's not known how long that process could take and how or whether the Vatican could punish Wesolowski if he is convicted.

According to the Times, the Vatican City laws say anyone found guilty of sexual abuse could face a maximum of 12 years in prison and a fine of nearly $200,000.

Despite being hailed for a series of bold moves and reforms during his first year as pope, Francis faced growing criticism for not moving nearly as quickly to address the scandal of the sexual abuse of minors by clerics.

Late last year, Francis finally set up a blue-ribbon panel to try to establish uniform norms for churches throughout the world, and in July, he invited several victims of sexual abuse by priests to in a series of meetings that were praised as moving and proof of his commitment to set a new course. He has also insisted that bishops as well as priests should be held to account. "There are no privileges," the pope told reporters in May.

But critics say the pope needs to do more and move faster, and they have cited the Wesolowski case as an example of the special treatment they say bishops still receive.

The Times story recounted how Wesolowski used to cruise the oceanfront promenade of the Dominican capital wearing black track pants and a baseball cap pulled low over his head and gave shoeshine boys money to perform sexual acts hidden behind some rocks or at a monument to a 16th-century Spanish friar.

Wesolowski, 66, was ordained more than 40 years ago by the then-Archbishop of Krakow, Karol Wojtyla, who later became Pope John Paul II. He was named nuncio to the Dominican Republic in 2008 by Pope Benedict XVI, who retired in February last year.

Here is the full text of the statement from Jesuit Fr. Federico Lombardi, head of the Holy See Press Office:

Former nuncio Jozef Wesolowski has recently appealed, within the prescribed limit of two months, the most serious canonical sentence of a return to the lay state that has been imposed upon him. The appeal will be judged without delay over the course of the coming weeks, most likely in October 2014.

It is important to note that former nuncio Wesolowski has ceased functioning as a diplomat of the Holy See and has therefore lost his related diplomatic immunity, and has been previously stated, the punitive procedure of the Vatican’s civil judiciary departments will continue as soon as the canonical sentence becomes definitive.

Regarding stories that have appeared over the past few days in various media, it is important to note that the Authorities of the Holy See, from the very first moments that this case was made known to them, moved without delay and correctly in light of the fact that former nuncio Wesolowski held the position of a diplomatic representative of the Holy See. This action relates to his recall to Rome and in the treatment of the case in relation to Authorities of the Dominican Republic.

Far from any intention of a cover-up, this action demonstrates the full and direct undertaking of the Holy See’s responsibility even in such a serious and delicate case, about which Pope Francis is duly and carefully informed and one which the Pope wishes to address justly and rigorously.

We must finally state that since former nuncio Wesolowski has ended all diplomatic activity and its related immunity, he might also be subjected to judicial procedures from the courts that could have specific jurisdiction over him.

Court: Milwaukee archdiocese can't use First Amendment to protect against claims in bankruptcy