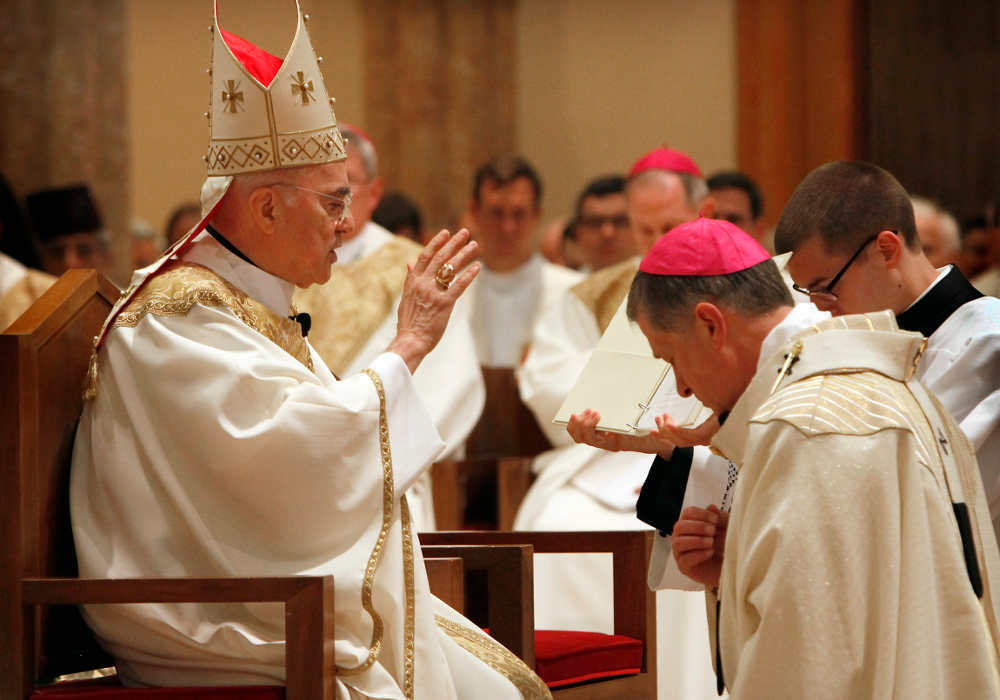 Archbishop Carlo Maria Vigano, then the apostolic nuncio to the U.S., blesses Archbishop Blase J. Cupich of Chicago after vesting him with the pallium during a special Mass at Holy Name Cathedral in Chicago Aug. 23, 2015. (CNS/Karen Callaway, Catholic New World)

Reaction to an explosive letter from a former Vatican ambassador to the United States has been swift and predictably partisan, leaving many Catholics wondering whether the letter's uncorroborated allegations against high-ranking church officials — including Pope Francis — are true or not.

The 11-page written statement from Archbishop Carlo Viganò, who was papal nuncio to the U.S. from 2011-2016, claims a high-level Vatican cover-up of allegations of sexual abuse by former cardinal Theodore McCarrick. It also alleges that sanctions imposed on McCarrick by Pope Benedict XVI were overturned by the current pontiff — which, Viganò said, means Francis should resign.

The allegations were released late Saturday evening by two conservative Catholic websites in the United States just as Pope Francis was beginning the second day of his visit to Ireland, which was already overshadowed by the issue of sex abuse. They prompted strong reaction from those already critical of this pope and of "Francis-friendly" bishops in the U.S. hierarchy.

Viganò's allegations move the church "from disaster to catastrophe" and "from crisis to hypercrisis," tweeted Princeton legal scholar Robert George.

Church commentator Rocco Palmo termed the move a "Saturday night massacre," and said on Twitter that "tonight's development affirms that the gravest crisis modern American Catholicism has known is now upon us."

Many, including more progressive Catholics, questioned Viganò's credibility, because he has been implicated in covering up alleged sexual misconduct  by former St. Paul-Minneapolis Archbishop John Nienstedt.

Others pointed out that Francis had replaced Viganò as nuncio after he was involved in the papal meeting with controversial Kentucky county clerk Kim Davis during the pope's visit to the U.S. in 2015. New York Times religion reporter Elizabeth Dias noted on Twitter that "Viganò and Francis have been political enemies."

In a surprisingly quick and bold move, one U.S. prelate — the conservative-leaning Bishop Joseph Strickland of Tyler, Texas — had a statement prepared by early Sunday morning, in which he called Viganò's allegations "credible." The statement, which Strickland instructed to be distributed at all Masses and through social media, called for a "thorough investigation" of the letter's allegations.

In response to requests by NCR for an interview with Strickland, the diocesan communications office issued this statement: "His Excellency has said all he wants to say for the time being in the statement which can be found on the Diocese of Tyler website. Please pray for bishops and priests."

Villanova historian and theologian Massimo Faggioli called Strickland's move "one step away from the schism," according to a tweet.

In Ireland, where Pope Francis was traveling for the World Meeting of Families, news from his meeting with eight victims of clergy and institutional abuse was released right around the same time as the nuncio's letter. Two survivors who were part of that meeting said the pope condemned corruption and cover up within the church as "caca," according to a statement from two survivors after the meeting.

Another survivor in the meeting, Marie Collins, told NCR's Joshua McElwee that "it would seem that he is confirming that [the pope is] not doing anything different than he's doing at the moment" on sex abuse.

Collins, who resigned from the Pontifical Commission for the Protection of Minors in 2017 out of frustration, later tweeted that McCarrick came up in the meeting. The pope "was strong in his condemnation," she said, adding, "I've no idea if what is in [the] letter [is] true or not."

Victims' groups and advocates urged the church to stay focused on the safety of children, not partisan church infighting.

Pope Francis should not resign, said a statement from BishopAccountability.org, which maintains a database of documents related to clergy sex abuse.

"Instead, it is to be hoped that Viganò's ‘testimony' will put additional pressure on Francis to take a much more aggressive approach to the Catholic abuse crisis than he has articulated during this visit to Ireland," the statement said.

That statement also criticized how Viganò "picks and chooses," implying that sexual misconduct and cover-up "are liberal problems in the Catholic Church."

The survivor group Ending Clergy Abuse called Viganò's letter "infighting between curia factions that are exploiting the abuse crisis and victims of clergy sexual abuse as leverage in the struggle for church power."

"Today's news dramatically demonstrates the secrecy and disorganization that dominates the culture that has created the child sex abuse crisis — and that culture is the culture of the Vatican," said the Ending Clergy Abuse statement.

David Gibson, a former religion writer and now director of Fordham's Center on Religion and Culture, said Viganò's letter is evidence itself of the church's clerical culture. "It shows that it's not just an old boys' network, but a clique of nasty, gossipy courtiers," he told NCR. "That's something Francis has denounced."

Gibson interviewed McCarrick in 2014 for a profile, which ran in NCR and touted the retired cardinal as "almost 84 and working harder than ever."

That article noted that McCarrick was "one of a number of senior churchmen who were more or less put out to pasture during the eight-year pontificate of Pope Benedict XVI" but under Francis was "back in the mix and busier than ever."

Gibson said that sentence referred to less importance placed on foreign policy by Benedict, but he wonders, in retrospect, if the Vatican hadn't signaled McCarrick to keep a low profile, in light of the two settlements for allegations of McCarrick's sexual misconduct with seminarians made by two New Jersey dioceses in 2004 and 2006.

Gibson thinks Viganò's attempt to take down Francis, however, will backfire. "It may have the opposite effect of what Francis' critics intend," he said, "in that it may actually empower the reformers."