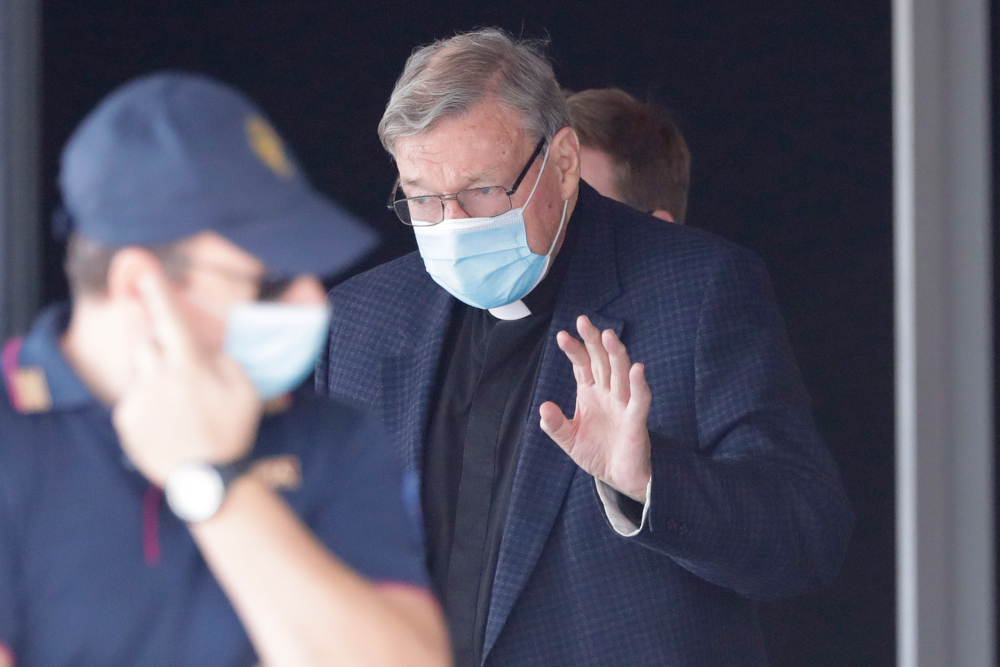 Australian Cardinal George Pell waves as he arrives at Rome's international airport in Fiumicino, Wednesday, Sept. 30, 2020. Pell took a leave of absence from his job in 2017 to stand trial in his native Australia on historic child sexual abuse charges, for which he was ultimately acquitted. (AP/Andrew Medichini)

Cardinal George Pell, the former Vatican finance czar who left in 2017 to face child sexual abuse charges in his native Australia, returned to Rome on Sept. 30 after his acquittal to find a Vatican mired in a corruption scandal.

The 79-year-old Pell arrived at Rome's Leonardo da Vinci airport on a flight from Sydney wearing a blue surgical mask. He waved briefly to reporters before getting into a waiting car without making any comments.

The trip is his first back to Rome after he took a leave of absence as Pope Francis' finance czar in 2017 to face historic sexual abuse charges stemming from his time as the archbishop of Melbourne. Pell, who maintained his innocence throughout, said after he was absolved by Australia's high court that he wanted to clean out his Vatican apartment but intended to make Sydney his home.

Pell arrived the same day that European anti-money laundering evaluators began a periodic visit to the Vatican. They, too, found a mounting financial scandal in the tiny city-state that already has cost a half-dozen people their jobs, including one of the Holy See's most powerful cardinals, Cardinal Angelo Becciu.

Pell and Becciu had long clashed over the Australian's efforts to bring greater transparency and accountability to the Vatican's balance sheets.

The Council of Europe's Moneyval team will be checking the Vatican's compliance with international norms to fight money laundering and terror financing.

The Vatican submitted to the Moneyval evaluation process after it signed onto the 2009 EU Monetary Convention and in a bid to shed its image as a financially shady offshore tax haven whose bank has long been embroiled in scandal.

Moneyval has generally given the Holy See positive to mixed reviews in its periodic evaluations. Its main criticism in recent years has been directed against the Vatican's criminal tribunal, which it faulted for failing to prosecute many cases despite receiving dozens of suspicious transaction reports from the Vatican's financial watchdog.

Vatican prosecutors last year opened a corruption investigation into the Holy See's investment in a London real estate venture, but to date no one has been indicted.

The Vatican's secretariat of state has sunk more than 350 million euros (nearly $400 million) into the London venture, much of it donations from the faithful. Tens of millions of dollars were paid in fees to Italian businessmen who acted as middlemen in the real estate deal.

Last week, Pope Francis fired Becciu, the cardinal who helped orchestrate the original deal. Becciu was the "substitute," or No. 2 in the Vatican secretariat of state from 2011 to 2018, when Francis made him a cardinal and named him prefect of the Vatican's saint-making office.

Becciu says Francis cited an unrelated issue in firing him: allegations that he used 100,000 euros ($117,000) in Holy See money to make a donation to a charity controlled by his brother.

Becciu and his family have denied wrongdoing.

"I hope the cleaning of the stables continues in both the Vatican and Victoria," Pell said in a statement last week, referring to his home state of Victoria, where he was initially convicted and served prison time before Australia's High Court absolved him.