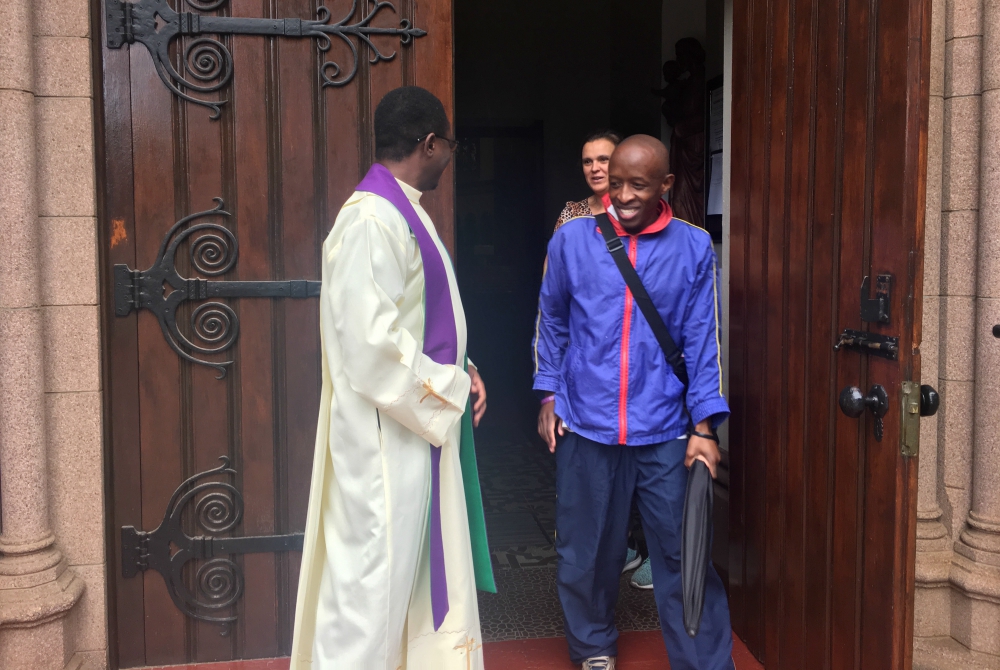 A parishioner talks with Fr. Norbert Munekani after Mass at Holy Trinity Catholic Church in Johannesburg, before the South African government imposed a lockdown to combat the coronavirus outbreak. (Patrick Egwu)

Editor's note: Since the coronavirus outbreak was declared a global pandemic by the World Health Organization, Catholic churches around the world have adopted different ways of celebrating Masses and keeping the faith of their members alive. In Africa, dioceses and parishes are moving Masses online, holding spiritual and special Communion services. Church activities such as Easter programs have also been suspended as a way of combating the outbreak. NCR correspondent Patrick Egwu examines the situation in some African countries.

Jesuit Fr. Norbert Munekani stands beside the lectern at the altar and stares at the empty pews in front of him. Before the outbreak, about 500-600 parishioners attended Sunday Mass, but the number has since dropped drastically. It was 10:30 a.m., and the morning dew was just settling on the now quiet but once busy city. In front of Munekani are fewer than 15 parishioners, each seated some meters apart, who had summoned the courage to attend the special Mass organized by the parish.

Munekani is the assistant parish priest at the Holy Trinity Catholic Church, Braamfontein, Johannesburg, where Sunday Masses have now been suspended. With the growing rate of the virus in the country and the declaration of a state of national disaster by President Cyril Ramaphosa, events have been largely disrupted. A week later, Ramaphosa announced a 21-day lockdown of the country, effective March 26 at midnight, as part of a wide range of efforts to combat the outbreak.

Before the lockdown announcement, the bishops' conference of South Africa had released a statement suspending Easter activities and offering some guidelines for Masses going forward. With the lockdown in place, Johannesburg Archbishop Buti Tlhagale announced that all Masses have been suspended indefinitely "until the lockdown is over and there is greater clarity on the way forward."

Parishioners were encouraged to livestream Masses from Radio Veritas and the Jesuit Institute or read the homilies from the diocesan or church's website.

Tlhagale added, "The faithful are strongly encouraged to gather as a family for the Liturgy of the Word by spending time in prayer, reading the Word of God of the Sunday Liturgy and interceding for the world that this COVID-19 virus will be contained and eradicated."

"It is a depressing moment for us," Munekani said after the Mass before the lockdown was announced. "It has affected a lot of people around the world because those who use to come for Mass no longer attend and the faithful feel their faith is shaken in one way or the other."

Munekani told NCR: "I feel for the people because I know many parishioners from this parish who would love to be here on a Sunday like this for the Mass and afterwards to meet other parishioners to associate and that has been taken away from them."

"We have to keep nurturing the spiritual lives of the parishioners despite the present circumstances," Munekani said. "Most people feel this is a time they need spiritual support because there are a lot of fears, anxieties and uncertainties and people need to be grounded somehow in their faith."

With the increasing rate of the coronavirus in Nigeria, the Lagos Archdiocese has directed Catholic faithful to join the livestreaming of Masses through Lumen Christi Television Network. In a statement, Archbishop Alfred Adewale Martins said, "As a church, we are concerned about public health and welfare as well as the protection of our faith and practices at the same time."

"We actively encourage all the faithful to take advantage of following the Mass to be streamed live on Lumen Christi Television Network during the period of this emergency," Martins said. "This is necessary so as to ensure that Sunday Masses are not crowded beyond the number."

A few days after the first case of coronavirus was reported in the country, the archdiocese released some guidelines for Mass that included reception of Communion on the palm, and suspension of public Stations of the Cross and the exchange of the sign of peace during Mass.

While public Masses would be organized in small groups not more than 50 parishioners in line with government directives, Martins said that those who believe their health could be jeopardized by attending public events were relieved of their Sunday obligation.

Other Catholic dioceses in the country have announced similar measures, with the Ondo Diocese in Southwest Nigeria holding a live Mass on Facebook on March 28. More than 2,000 of the Catholic faithful in the country joined the service. At the end of the Mass, the presiding priest, Fr. Pius Akeju, announced that Sunday Mass the next day would be held at 7 a.m., 8:30 a.m. and 10 a.m., and invited the faithful to join in from their homes.

In Southeast Nigeria, the Awka Diocese suspended Masses indefinitely, including the 2020 Mothers' Sunday, held every year before the Easter celebration.

In addition to these measures, academic activities of schools run by Catholic dioceses and parishes in the country have also been suspended as part of efforts by the government to combat the virus.

Ghana: 'The Church cannot and will not abandon you!'

On March 15, Ghanaian President Nana Akufo-Addo announced the ban of public gatherings, including church activities, political rallies, conferences and workshops in the country for four weeks as part of wide range of efforts at combating the outbreak in the country.

In adjusting to this development, the Ghana Catholic Bishops' Conference suspended all Masses and spiritual programs such as retreats, devotions, meetings and pilgrimages for four weeks and called for livestreaming of Masses for Catholic faithful in their homes.

"Where possible, live streaming of Masses should be encouraged to enable the faithful to receive spiritual Communion," Tamale Archbishop Philip Naameh, president of the conference, said in a statement.

Archbishop John Bonaventure Kwofie of Accra said that the archdiocese would stream weekday Masses live on TV at 6:30 a.m., 12:30 p.m. and 5:30 p.m., and Sunday Masses at 8 a.m., to be aired on Crystal TV Plus in collaboration with Lumen Christi Ghana.

"I invite you to participate from the comfort of your homes and receive Spiritual Communion in order to 'renew, strengthen and deepen our incorporation into the Church received through baptism,' " Kwofie said in a pastoral letter.

On Fridays, during the Stations of the Cross, the media houses will also livestream the procession at 5:30 p.m., according to the statement.

"In addition, some Parish Priests have also mentioned initiatives being put in place in their parishes to reach you through social media," Kwofie said. "The Church cannot and will not abandon you!"

Every day, some priests from the Accra Archdiocese use social media, specifically Facebook, to hold Masses with the theme "Daily Adoration for the End of Coronavirus" and share special prayers against coronavirus. Using Radio Angelus, a 24-hour Catholic radio run by the diocese, the Mass is distributed to thousands of Catholic faithful who follow the proceedings online from their homes and comment as the Mass is going on.

"Lord, heal us of coronavirus, we pray. Amen," Fr. Anthony Agnes said during the concluding prayers at one of the Masses.