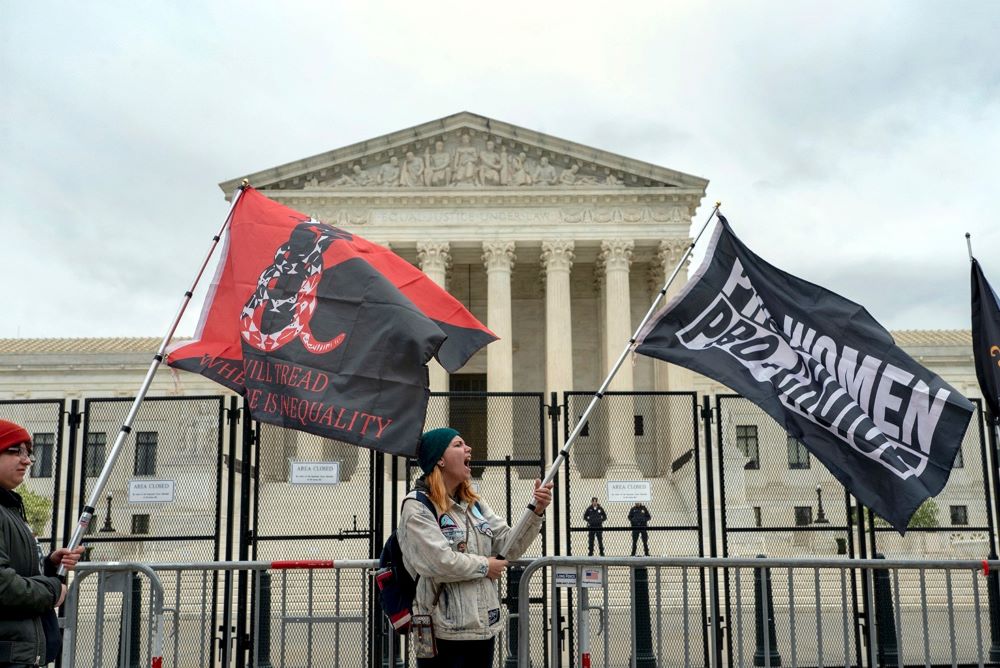 Protesters wave flags during a demonstration outside of the U.S. Supreme Court, Sunday, May 8, 2022, in Washington, D.C. A leaked draft opinion suggests the Supreme Court could be poised to overturn the landmark 1973 Roe v. Wade case that legalized abortion nationwide, according to a Politico report released May 2. (AP/Gemunu Amarasinghe)

Religious leaders, governmental authorities and extremism experts say they are disquieted by a spate of incidents that took place at Catholic churches over the weekend, raising concerns about vandalism and the potential for white nationalists to exploit escalating tensions regarding abortion.

What's more, experts warn that faith-fueled right-wing extremist groups may be planning to appear at other events to challenge supporters of abortion rights.

The incidents over the weekend followed days of demonstrations outside the Supreme Court and elsewhere in the wake of a leaked draft opinion penned by Justice Samuel Alito. The draft signaled the court would overturn the landmark 1973 Roe v. Wade ruling, which legalized abortion nationwide.

Rumors circulated throughout the week that activists who support abortion rights were planning widespread protests at Catholic churches across the country. Church leaders have long stressed the tradition's opposition to abortion and advocated against it, though recent polling indicates most U.S. Catholics support keeping abortion legal in all or most cases and an even larger majority opposes overturning Roe v. Wade.

"I am one of 68% of Catholics in the United States who do not want to see Roe versus Wade struck down," Jamie Manson, president of Catholics for Choice, said in a speech outside the Supreme Court last week. Her group staged its own mostly silent protest at Washington's Basilica of the National Shrine of the Immaculate Conception in January, projecting images in support of abortion rights onto the church as an anti-abortion vigil was held inside. 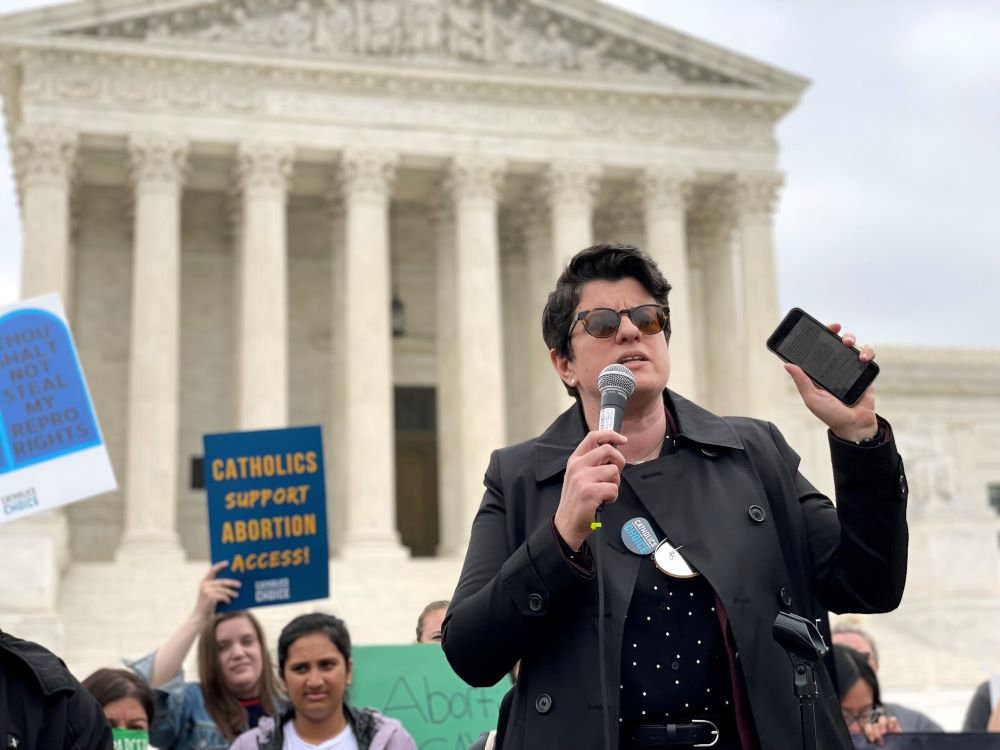 Jamie Manson, president of Catholics for Choice, speaks during demonstrations in front of the U.S. Supreme Court on May 3 in Washington, D.C. (RNS/Jack Jenkins)

Despite warnings, a raft of church demonstrations did not, in fact, materialize over the weekend. A small group of demonstrators donned in attire inspired by the show "The Handmaid's Tale" briefly interrupted Mass at the Cathedral of Our Lady of the Angels in downtown Los Angeles before being escorted out by security. At least one Catholic church in Colorado was vandalized, with the phrase "My body my choice" spray-painted on the church door in red. Police are reportedly investigating it as a bias-motivated crime, otherwise known as a hate crime.

White House press secretary Jen Psaki appeared to condemn such vandalism while speaking to reporters May 9, distinguishing it from peaceful protests that occurred outside the homes of some justices in recent days.

"We have not seen violence or vandalism against Supreme Court justices — we have seen it at Catholic churches. That's unacceptable," she said. "The president does not support that."

On May 10, Archbishop José H. Gomez of Los Angeles, president of the U.S. Conference of Catholic Bishops, and Archbishop William E. Lori of Baltimore, chairman of the USCCB's Committee on Pro-Life Activities, released a statement in response to the events, calling on "Catholics around the country to join us in fasting and praying the Rosary" on May 13, the memorial of Our Lady of Fatima. The bishops specified that such prayers should be peaceful and encouraged Catholics to appeal to "civility and love."

But it was a different protest, at St. Patrick's Old Cathedral in New York City on May 7, that attracted the most attention — and raised alarm bells among extremism experts. The raucous but peaceful assembly of abortion rights supporters outside the church was part of a long-standing counterprotest group. Normally, they gather to protest a group of Catholics who assemble inside the church before marching to demonstrate at a Planned Parenthood.

This weekend's iteration drew a larger crowd of abortion rights supporters than unusual, however, and a group of men gathered in front of the church doors in an apparent effort to protect the church. Footage of the men praying the rosary was shared by Georgia Republican Rep. Marjorie Taylor Greene, who lauded them as heroes, saying, "God bless them"

But at least one of the men — an individual in a blue "America First" cap and a New York Fire Department shirt — was filmed heckling the counterprotesters.

"You have no choice," he yelled. "Not your body, not your choice. Your body is mine and you're having my baby!"

He then added, in a softer voice: "Joke, joke."

Asked for comment on the protest, a spokesperson for St. Patrick's referred to an interview conducted last week with the Fr. Brian Graebe, the church's pastor, on Fox News. Graebe denounced the cause of demonstrators who protested in support of abortion rights, but also appeared to distance the church from the blue-capped individual, who was also disavowed by the New York Fire Department.

"We did have someone, unfortunately, sort of hijack the event on what he tried to make it look like was our side of the issue," he said. "(He was) saying things that do not at all represent our position or point of view. That was unfortunate, because that makes our job much more difficult."

It was not immediately clear if the individual was affiliated with America First, a Christian nationalist group whose affiliates sometimes call themselves "Groypers" and are led by Nick Fuentes, a right-wing provocateur widely decried as a white nationalist. Fuentes, who is Catholic, shared footage of the men praying at the church on his Telegram page three times, and the heckler's distinctive blue hat appeared to be identical to the variety worn by devotees of America First during an anti-vaccine demonstration in New York in November, when members also held aloft crucifixes and shouted a favorite chant: "Christ is King!"

Alex Bradley Newhouse, deputy director of Middlebury College's Center on Terrorism, Extremism and Counterterrorism, noted that devotees of America First — whose branded gear was worn by participants in the Jan. 6, 2021, Capitol insurrection — have appeared at other anti-abortion events this year as well. America First flags were hoisted at the March for Life, a massive annual anti-abortion gathering in Washington, D.C., and another white nationalist group — Patriot Front — marched near the rally, much to the frustration of organizers.

"America First and the Groyper movement, alongside more fringe groups like Patriot Front, pose a significant concern for escalating tensions and conflict surrounding the abortion rights debates," Newhouse told RNS in an email. "America First is deeply enmeshed with an overlapping, increasingly violent network of extremist milieus, including Christian Nationalism, incel communities, white nationalist networks, and even some links out to accelerationist networks. There is past indication that accelerationist and neofascist groups like Patriot Front are willing to use anti-abortion activism to try and create alliances across movements, as well."

He added: "As a result, the conditions are unfortunately primed for unification and escalation from these movements."

"Given right-wing extremists' long-standing perception that the anti-abortion movement is a friendly venue to their cause and their ever-present desire to insert themselves into tense political debates, there's real concern that right-wing extremists may appear at pro-choice protests with the intent of agitating and intimidating rallygoers," Holt said.

"For white nationalists specifically, opposition to abortion is a centerpiece in their worldview built on preserving and protecting the majority power of a white ruling class."