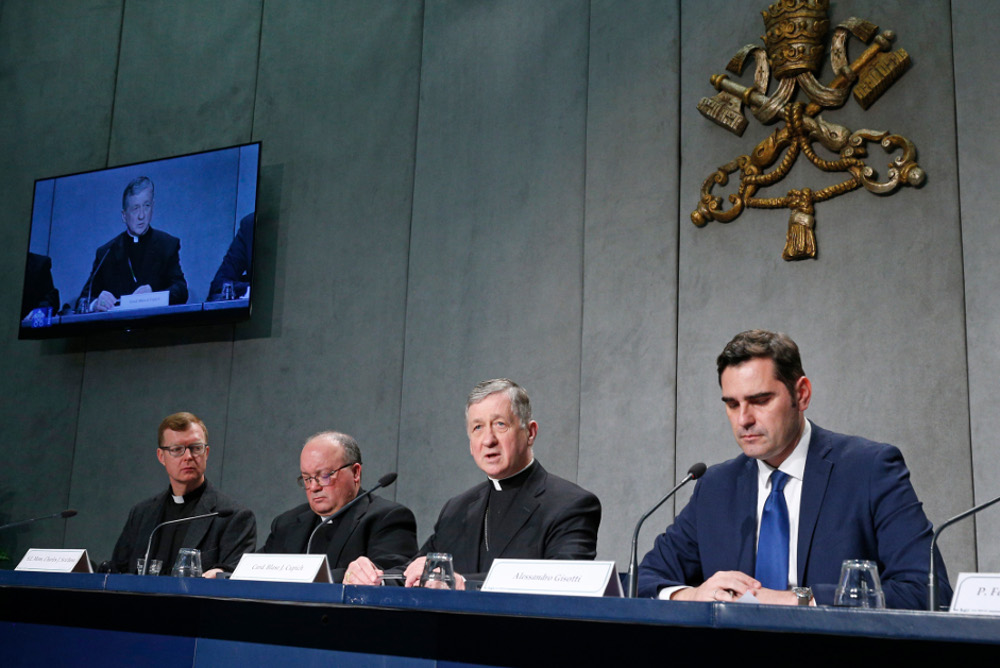 Jesuit Fr. Hans Zollner, Archbishop Charles Scicluna of Malta and Cardinal Blase Cupich of Chicago, all members of the organizing committee for the Feb. 21-24 Vatican meeting on the protection of minors in the church, attend a press conference to preview the meeting at the Vatican Feb. 18. Also pictured is Alessandro Gisotti, interim Vatican spokesman. (CNS/Paul Haring)

Days before Pope Francis' global summit on clergy sexual abuse gets underway, Vatican officials Feb. 18 declined to comment on the case of a priest working at the Catholic Church's highest court who has been listed by his home diocese as credibly accused of abuse.

At a briefing to outline the program of the Feb. 21-24 meeting on child protection, officials would not respond to a question about the status of Msgr. Joseph Punderson, an official at the Supreme Tribunal of the Apostolic Signatura, who was included on a Feb. 13 list of accused clerics released by the Diocese of Trenton, New Jersey.

"We are not now here to discuss single cases," said Vatican spokesman Alessandro Gisotti, responding to a question from NCR at the briefing, which also included three of the organizers of the upcoming summit: Chicago Cardinal Blase Cupich, Maltese Archbishop Charles Scicluna and Jesuit Fr. Hans Zollner.

Pressed again on the matter later in the briefing, Gisotti referred questions about Punderson's case to the Trenton diocese. The spokesman then said the priest "is not at the tribunal of the signatura at this moment," but did not specify if that response referred to the priest's physical location or his position within the Vatican.

Punderson is listed in the Vatican's official yearbook as the defender of the bond at the signatura, which is the highest appeals court in the global church.

The priest is one of 30 clerics named on the Trenton diocese's list, which only provides the date of birth, year of ordination and status of each person named. Punderson's status is given as "removed from ministry."

Scicluna, who beyond his role in Malta also serves as an adjunct secretary for the Vatican's Congregation for the Doctrine of the Faith, also declined during the briefing to comment specifically on Punderson's case, but called the question "legitimate."

"People need to know that what Rome asks of the local churches it also ready to apply at home," he said, referring to calls the Vatican has made in recent years for dioceses across the world to put in place procedures to confront clergy abuse.

Anne Barrett Doyle, co-director of the abuse tracking website BishopAccountability.org, called the Vatican officials' declination to speak about Punderson's case "a cop-out, and a formula for failure."

"To generate real remedies, you must examine actual cases," she said in a statement. "The pope shouldn't forbid discussion of the cases. … He should instead use these as real-time teaching moments."

The upcoming three-day summit on child protection is the first of its kind. Francis has called all the presidents of the world's bishops' conferences to the Vatican for the event, along with the heads of many of the global men and women's religious orders.

Cupich said that the pope "wants to make very clear to the bishops around the world, not only the ones participating, that each one of them has to claim responsibility and ownership for this problem."

"There's going to be every effort to close whatever loopholes there are, to make sure that people understand, on an individual basis as bishops, what the responsibilities are," said the cardinal.

"My hope would be that people see this a turning point," he added.

Each day of the summit will focus on a different theme, starting with responsibility, following with accountability, and then ending with transparency. The event will conclude Feb. 24 with a Mass and a final speech from Francis.

The first three days will each include three presentations, time for working in small language groups, and prayer services involving testimony from abuse survivors. There will also be a penitential liturgy in the evening of Feb. 23.

Jesuit Fr. Federico Lombardi, who will be moderating the meeting, said during the briefing that he expects about 190 people to be taking part, including presidents of bishops' conferences, heads of Eastern-rite churches and the members of the Council of Cardinals.

There will also be 12 representatives of men's religious orders and 10 from women's orders.

The organizers were asked if the summit would only be considering abuse of minors, or if it would also include abuse of seminarians and vulnerable adults.

"We are focusing in these days on those who have so little voice," said Cupich. "Young people, minors, don't have a voice."

"This is about making sure that their voice is heard," he said. "That's why we're focusing the attention on that." 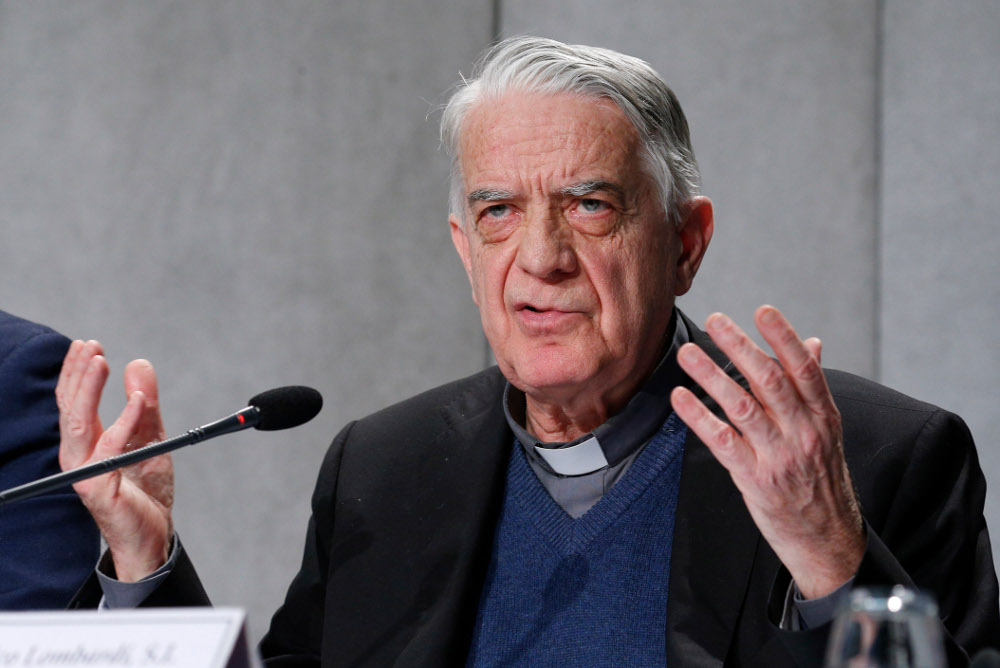 Jesuit Fr. Federico Lombardi, moderator of the Feb. 21-24 Vatican meeting on the protection of minors in the church, speaks at a press conference to preview the meeting at the Vatican Feb. 18. (CNS/Paul Haring)

Scicluna said that in discussing abuse of minors "you're obviously going to share good practice that will help you as a bishop with other forms of misconduct."

Asked about the high expectations for the summit, he said it would not solve all the problems in the church.

"Follow-up is going to be of the essence," he said.

Clergy abuse survivors and advocates are holding numerous events in Rome throughout the week as the summit gets underway. Several offered impromptu remarks outside the Vatican press office following the Feb. 18 briefing.

"Pope Francis has been talking about zero tolerance since he became pope," said Peter Isely, a survivor with the Endling Clergy Abuse group. "It's time to deliver on that promise."