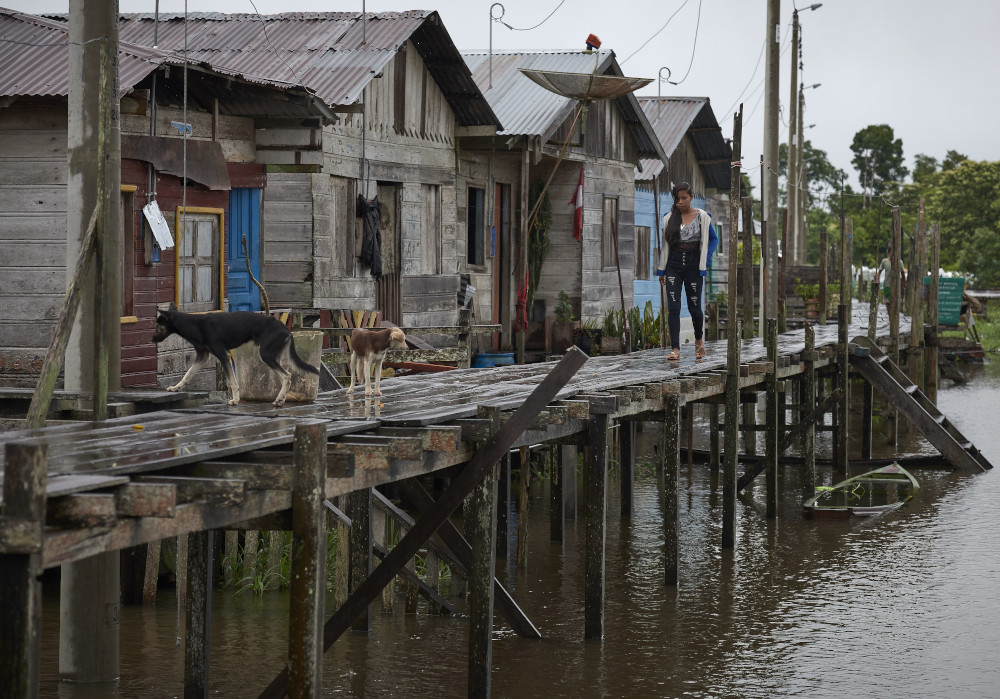 A woman walks along a raised sidewalk in Islandia, a town in the Peruvian Amazon. (CNS/Paul Jeffrey)

The parish where Sr. Maria Emilia Molenda Kuche works stretches along the banks of the Amazon River and far up the Yavari River, an area sparsely populated by Tikuna, Yagua and Kukama Indians.

It takes about eight hours to reach the village closest to the parish team's headquarters in this riverside town. The most distant is five days' travel upriver.

When the parish team visits, members never know what they will find, said Kuche, 73, a member of the Missionaries of Christ Crucified, a Brazilian religious congregation. Sometimes more people than expected show up; sometimes there is no one.

"We plan something, and that may not be what happens at all. You have to be prepared for all these things," she said. "This work, this mission, is very difficult."

The triple border shared by Peru, Brazil and Colombia along the Amazon River is a remote and lawless area that challenges the Catholic missionaries who work among its small towns and indigenous villages.

Drug traffickers transport cocaine downriver. Unscrupulous loggers lure workers from distant towns with the promise of jobs and then fail to pay them, stranding them far from home. Outsiders who arrive in indigenous villages offer to take children to town for an education, then force them into prostitution.

Government health posts are scant and often lack crucial medicines, and schools are poorly equipped. Teachers must travel by boat to a town upriver to receive their pay and may be gone for days at a time.

Those problems and others make borders a key focus for the Catholic Church, and one that bishops are likely to examine when they gather at the Vatican in October for the Synod of Bishops for the Amazon.

Borderlands are places where "conflicts and violence are aggravated, where the law is not respected and corruption undermines government control, clearing the way for indiscriminate exploitation by many enterprises," according to the working document for the synod.

"For all these reasons, work is needed to help see the Amazon as a home for all, which deserves to be cared for by all," according to the document, which is based on discussions held in dozens of places around the Amazon River basin during the second half of 2018.

The document calls for joint pastoral work focusing on borderlands and a church structure that will help parish teams address the problems.

In the Amazon region, geographic boundaries are often accompanied by invisible borders within countries. For indigenous youths, moving from rural villages – which often lack basic services such as electricity – to the nearest town or city means crossing into an unfamiliar world.

One such frontier is Atalaia do Norte, a Brazilian town of about 15,000 people upstream from Islandia on the Yavari River, which is called the Javari in Brazil. The trip takes about an hour by car, if the unpaved road has not washed out in a rainstorm, or a day or more by boat along the looping waterway.

Atalaia do Norte marks the threshold between Brazil's Javari Valley indigenous territory, a huge swath of forest accessible only by river, and urban Brazil, with its automobiles, hospitals and cash economy. The indigenous territory is inhabited by members of half a dozen indigenous groups who live in villages along riverbanks, as well as a number of seminomadic groups that continue to shun contact with the outside world.

"We depend on the rivers, lakes and forest that were created for us," said Paulo Marubo, coordinator of the Union of Indigenous Peoples of the Javari Valley. "In the city, you have markets. For us, the lake is our market."

Parents support their families by farming small plots of land carved out of the forest and by hunting and fishing, said Marubo, who prefers to use his traditional name, Kenampa.

Most of the villages lack public services like electricity. Village schools offer classes only through fifth grade, with lessons in the children's native language and a special curriculum that involves many activities outside of the classroom.

To continue their education, young people travel by boat – a journey of several weeks from the most distant communities – to Atalaia do Norte.

There they step into another universe, where there is a sharp divide between indigenous and non-indigenous residents, said Marta Barral, 45, a Xaverian lay missionary from Madrid who has worked in Atalaia do Norte for the past two years.

"They are parallel worlds," she said.

The indigenous students must sit in a classroom and do their lessons in Portuguese, a language they do not speak well, said Barral, who offers tutoring sessions as part of her missionary work. 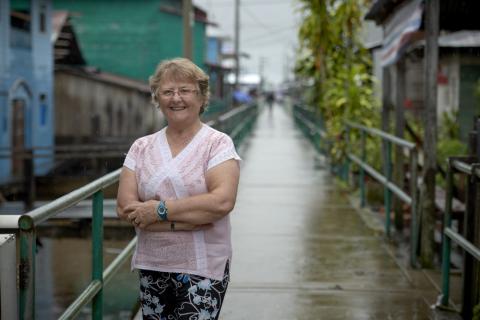 Sr. Maria Emilia Molenda Kuche of Parana, Brazil, a member of the Missionaries of Jesus Crucified, is pictured in Islandia, a town in the Peruvian Amazon, where she serves. (CNS/Paul Jeffrey)

Those with relatives in town at least have a place to live, but others must rent rooms, which means finding jobs in their first foray into a cash economy. The only work available is domestic labor for girls or manual labor for boys, Barral said.

"They are studying so they can return to their communities, but in fact (most) do not return," Barral said. "They say life is better there, but they make their lives here."

Young people get used to having electricity and running water, she said. And most villages have no paid jobs other than the village teacher or nurse technician.

Some young people drop out of school and go home or move to larger cities in search of employment, while others run afoul of laws they never knew existed.

Barral tells of two Matis men who bought two bottles of cooking gas. The bottles had been stolen, and the men were caught and charged with receiving stolen property.

In late March, a 14-year-old boy from a distant village was jailed for drug trafficking after showing off the money, equivalent to about $10, that someone had paid him to deliver a small package.

Downhill from Atalaia do Norte's main plaza, narrow wooden boats with palm-thatch roofs bob beside the tree-lined riverbank. When villagers come to town – because a relative is sick, or to collect government cash subsidies for mothers and retirees – they live on the boats while they wait.

Those cash subsidies worry Clovis Marubo, 53, a longtime leader who worked with the Catholic Church's Indigenous Missionary Council in the 1980s to survey and fight for designation of the Javari Valley indigenous territory.

When the cash economy reaches indigenous villages, it is often accompanied by alcoholism, drugs, prostitution of children and adolescents, and sexually transmitted illnesses, he said.

Life is changing, and the boundary between traditional life ways and the urban world is blurring.

"People are losing their languages, their way of telling their stories," he said. "They no longer value their traditional ways of healing, with plants and shamans. That is especially true of young people."

He would like to see indigenous education centers established, where elders could teach young people traditional practices, such as ceramics and healing rituals.

"If leaders don't foster this kind of discussion, it will be difficult to keep young people in the communities," he said. "If we don't make an option for them, what will happen to them in the future?"

When bishops meet at the Vatican in October for the synod, Marubo hopes they will listen closely to the problems facing indigenous people in Brazil. President Jair Bolsonaro, who took office in January, has said that the country's Indians should be assimilated into the wider society and has threatened cutbacks in indigenous health care, education and protection for indigenous territories.

"I want to tell the bishops and the pope that we exist," Marubo said. "We have a life and a history that is sacred. The pope's God, our God, is the God of all. We keep our traditions, our cosmology, our knowledge of the world that was created by our God."

He said he hopes the church will "help us maintain our territory, the life of our isolated peoples, the animals so they don't become extinct," he says. "We ask authorities, the church, the entire world to help us, to pray for us, so that the life of indigenous people will continue."