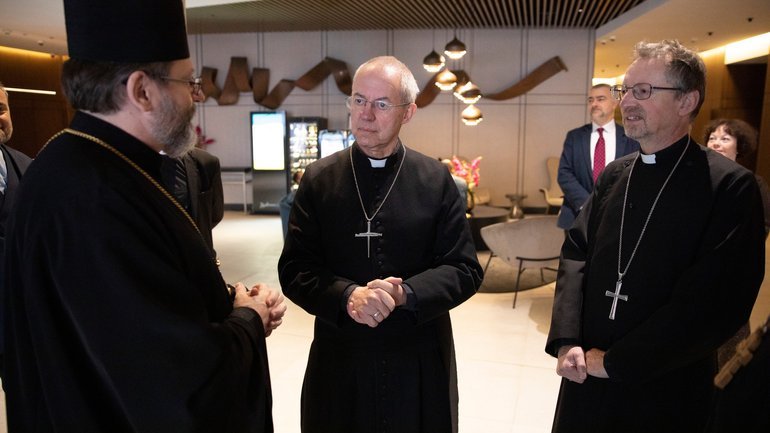 Anglican Archbishop Justin Welby spent three days in Ukraine to show solidarity with the people there. It was the first visit of an archbishop of Canterbury to an independent Ukraine.

The archbishop's meeting Dec. 1 with the All-Ukrainian Council of Churches and Religious Organizations started in a bomb shelter because air raid sirens were sounding. The meeting concluded in a conference hall.

"The people of Ukraine have shown extraordinary courage in the face of Russia's illegal, unfair and brutal invasion. This visit was intended to show solidarity" as people face "an extremely difficult winter," Welby said.

He added that he wanted to learn what kind of support his church could offer "in the face of the ongoing devastation, loss and destruction caused by this war." Religious leaders also discussed how to help Ukrainian refugees.

While in Ukraine, Welby also met with Archbishop Sviatoslav Shevchuk of Kyiv-Halych, major archbishop of the Ukrainian Catholic Church, who thanked him for his words of support and solidarity with Ukraine. They also discussed the current situation in Ukraine, drawing attention to pastoral challenges and needs.

The leaders discussed reconciliation between Ukraine and Russia, looking at the post-World War II experience of the Germans and French, the French and Poles, and the 30-year path to the reconciliation of the Ukrainian and Polish peoples.

Welby also met with Metropolitan Epiphanius of Kyiv, head of the independent Ukrainian Orthodox Church. The two had met at Canterbury's Lambeth Palace in July.

Welby noted that he personally prays for Ukraine every day.

"My position is not to promise much but to do more than I promised. We will have a meeting of bishops next week, where we will provide a report on our journey and propose concrete steps to help those in need in Ukraine," the archbishop told the metropolitan.