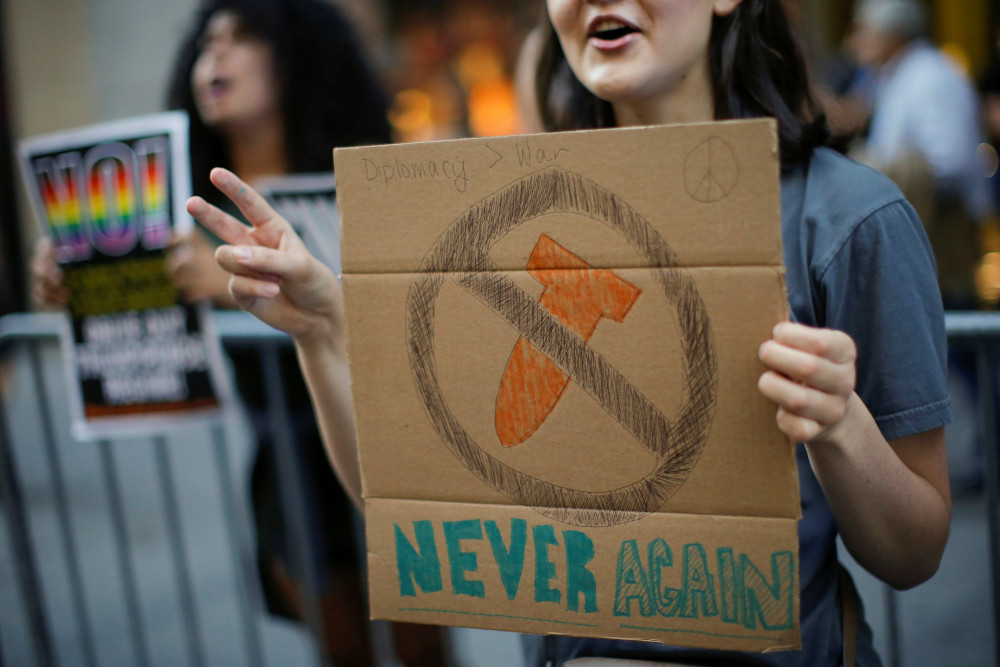 The world still has not learned "the essential lesson" of the Cuban Missile Crisis that "the only way to eliminate the nuclear danger is through careful, universal, verifiable steps to eliminate nuclear weapons," said Archbishop John C. Wester of Santa Fe, New Mexico.

He renewed his call "for dialogue on the existential issue of eliminating nuclear weapons" and said New Mexico's congressional delegation should help lead this dialogue," given that the federal government spends billions in the state on weapons production while New Mexico "remains mired at the bottom of numerous socioeconomic indicators."

Wester made the comments in an Oct. 14 reflection on the 60th anniversary of the Cuban Missile Crisis, "regarded as the closest that humanity has ever come to global nuclear annihilation," he said.

A month earlier, he took his summons to begin meaningful conversations to achieve full nuclear disarmament to the annual United Nations prayer service in New York.

In August, he apologized for the atomic bombings of Japan in 1945 and to Indigenous New Mexicans, uranium miners and scientists suffering from ill health related to the nuclear weapons industry in the state.

He also released a pastoral letter Jan. 11: "Living in the Light of Christ’s Peace: A Conversation Toward Nuclear Disarmament."

For 13 days in October 1962, President John F. Kennedy convened a small group of senior officials to debate how to address the newly discovered presence of Soviet nuclear-armed missiles in Cuba, which is just 90 miles from the United States.

Some in the group wanted a military solution, such as an invasion or air strikes, and others sought a diplomatic solution to remove the missiles. The U.S. eventually agreed to Soviet leader Nikita Khrushchev's offer to remove the Cuban missiles in exchange for the U.S. promising not to invade Cuba.

Now, 60 years later, President Joe Biden "is invoking that dreaded name of Armageddon to describe what could potentially occur in the crisis over Ukraine," Wester said.

Biden was responding to suggestions by Russian President Vladimir Putin that possibly tactical nuclear weapons could be used in Russia's war against Ukraine.

"Robert McNamara, defense secretary under President Kennedy, said that we survived the Cuban Missile Crisis only by plain dumb luck," Wester said. "In my own childhood, I had to practice the futile exercise of 'duck and cover' in school."

"It deeply pains me to think of young boys and girls growing up today with renewed nuclear threats that should have been decisively dealt with and resolved 60 years ago," he added.

That the world's nuclear weapons states "have no intention to honor their pledge to eliminate nuclear weapons," he said, "is made abundantly clear yet again by the failure of the recent Review Conference of the (Nuclear) Non-Proliferation Treaty to make any progress whatsoever toward global nuclear disarmament."

"Yet the U.S. and other nuclear weapons powers sternly denounce the new Treaty on the Prohibition of Nuclear Weapons, which the Vatican was the first nation-state to sign," he said.

Wester said the nuclear powers' alternative to the Nuclear Non-Proliferation Treaty is investing "trillions of dollars ... into so-called 'modernization' programs that will keep nuclear weapons forever."

They "intentionally ignore" the treaty's "50-year-old obligation to enter into serious negotiations leading to nuclear disarmament," he added.

Investing in such modernization programs helps fuel "a new nuclear arms race" and "robs society of resources that could help humanity achieve its full potential" in many areas, including education, health care and addressing climate change, Wester said.

It will be "extremely hard work" to abolish nuclear weapons and have this "concretely verified," he said, but humanity cannot "continue to survive with nuclear weapons."

Someday Putin will be gone, because "no dictator lasts forever," he said.

"But do we have to live with the threat of nuclear weapons forever?" he asked. "We need to pray for peace in Ukraine and to begin working in a determined, deliberate manner toward a future world free of nuclear weapons."

He said the Archdiocese of Santa Fe has "a special responsibility" to "help lead humanity toward nuclear weapons abolition."

"More money is spent on nuclear weapons research and production in the Archdiocese of Santa Fe than any other diocese in the country because of the Los Alamos and Sandia National Laboratories," he explained.

Perhaps these labs provide "new verification technologies that could help underpin a future world free of nuclear weapons," he suggested.

"Congress should have the courage to begin to help lead us toward a future world free of nuclear weapons," Wester said. "In particular, I call upon the New Mexican congressional delegation to end their support for unneeded, exorbitantly expensive plutonium pit production for nuclear weapons."

He said New Mexico's congressional members tout expanding nuclear weapons production programs as jobs programs, but these federal dollars "appear to stay in privileged enclaves" of the state, he noted, while New Mexico has the most children living in poverty and declining per capita income relative to the other 49 states.