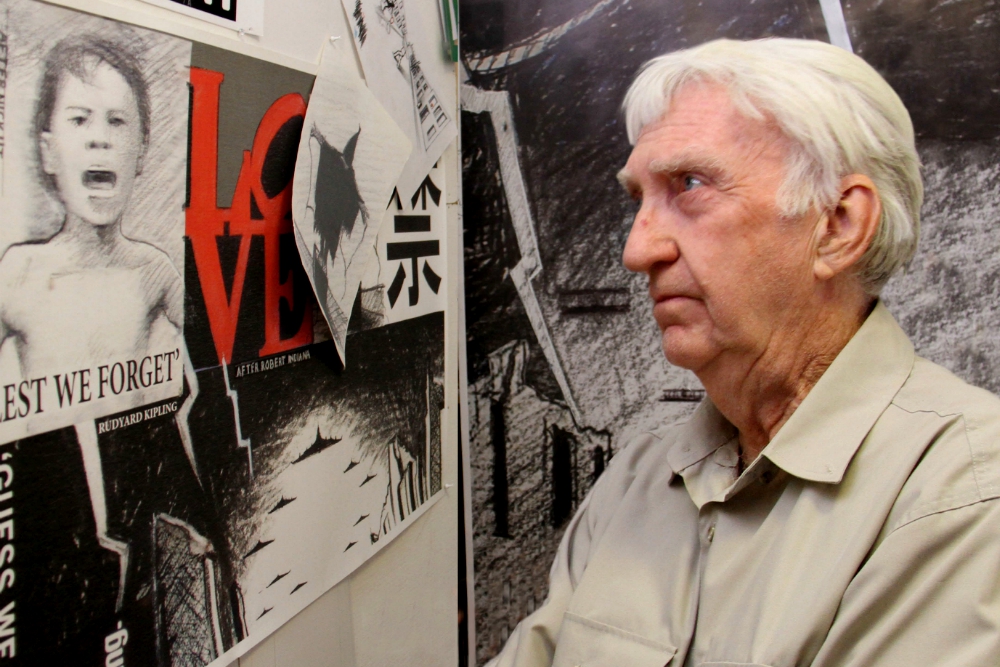 Artist William Kelly appears in the documentary "Can Art Stop a Bullet: The Big Picture," directed by Mark Street and produced by Fiona Cochrane. (Courtesy of William Kelly)

William Kelly is a peace activist who marches, protests, dialogues and contributes to social transformation through the art he creates. His recent project, completed between 2014 and 2016, is a print banner, 42 feet long, some 5 feet wide, titled: "Peace and War/The Big Picture." It was created to hang in the La Trobe Reading Room at the State Library of Victoria in Melbourne, Australia, and is the focus and framework for a new documentary, "Can Art Stop a Bullet: The Big Picture."

In 2017, NCR executive editor Tom Roberts wrote a feature article about the life and artistic activism of his longtime friend Kelly. At that time, Roberts described this harmonic piece as "a monumental work not only in size but as a rich narrative of images, raw figurative work and words." 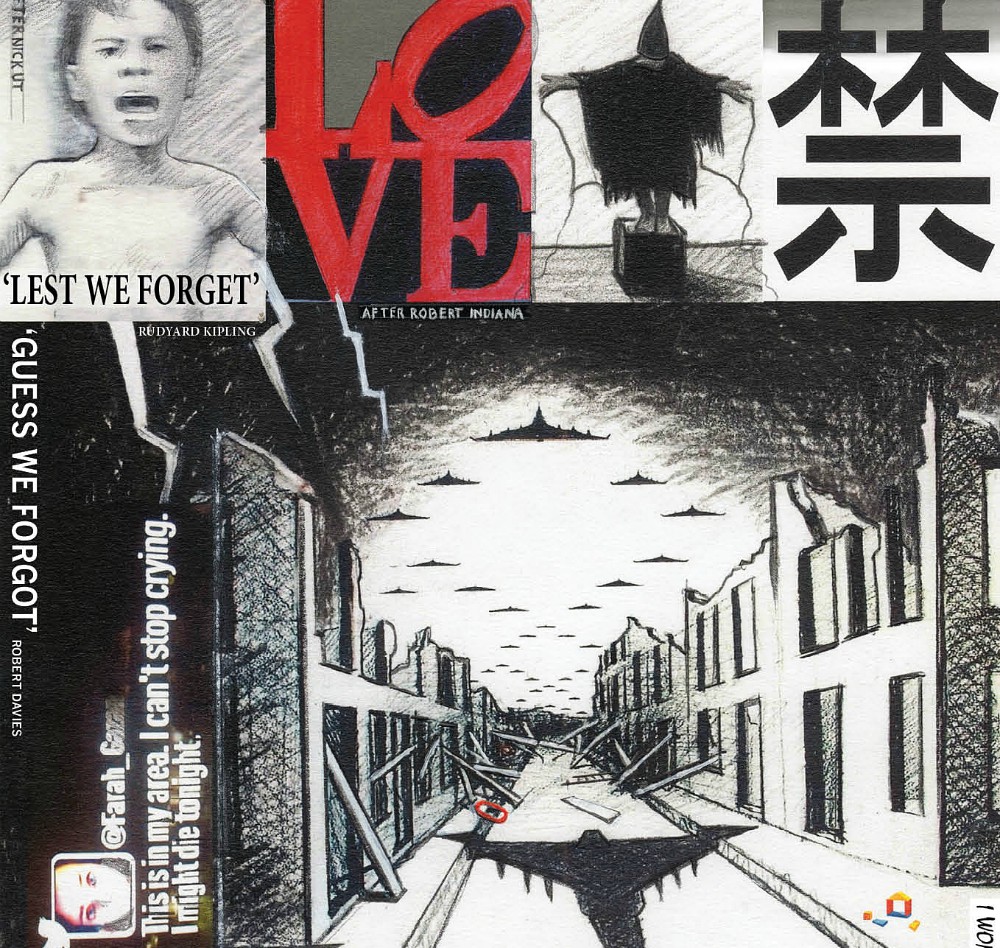 The documentary film gives us a close-up and personal look at Kelly's project with backstory of the artist's life and interviews with other artists using different media to promote peace. Kelly redraws or recreates the art of some of these artists to integrate them into this iconic piece. One of them is Nick Ut, who took the startling photo of Kim Phuc, the girl burned with napalm during the Vietnam War.

Central to this majestic example of Kelly's hanging art, installed to integrate into the lines of the library's architectural setting, is a nursing mother, the image of life at its strongest and most vulnerable. 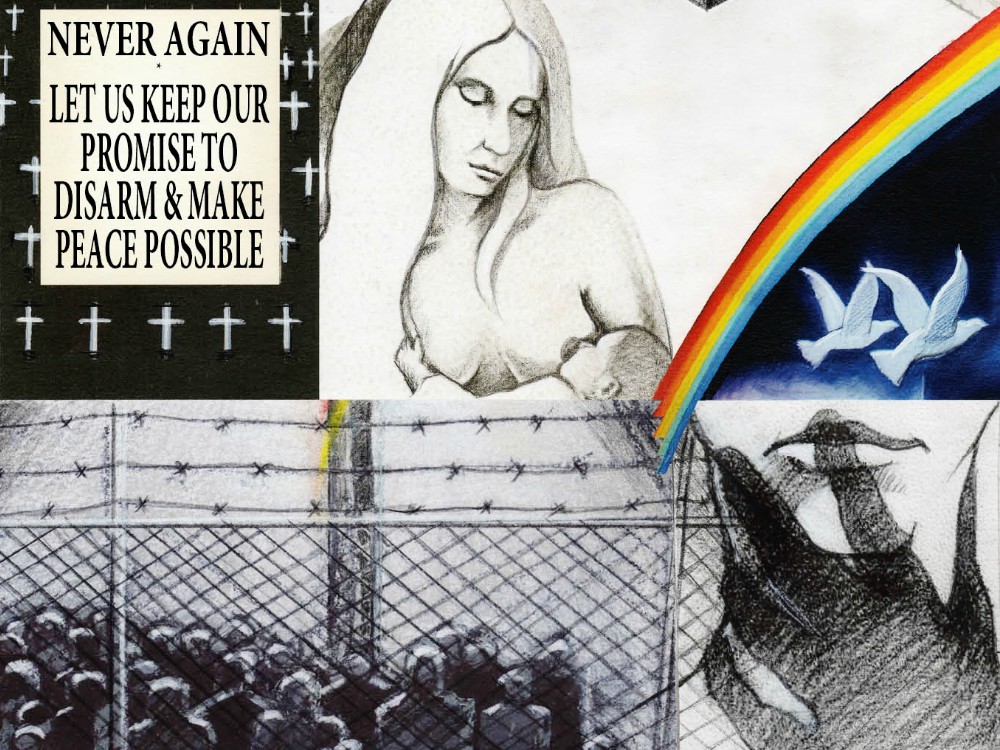 Kelly was born in 1943 in Lackawanna, New York. It was a poor industrial town and the kids belonged to gangs, including Bill (as he signs his name). He first encountered art at a museum and decided he would try his hand at it.

He studied art at the Philadelphia College of Art (now the University of the Arts) and the National Gallery School in Melbourne, where he makes his home. In the mid-1970s, he became dean at the Victorian College of the Arts. This is also the location of the seminal work of art that is the subject of the film.

The feature-length film is directed by Mark Street and produced by Fiona Cochrane. It was shown Oct. 23 at the United Nations Film Festival in Palo Alto, California.

I was able to speak with Kelly by phone from his home in Australia about the film and his art for peace. For him, one key thing is that art is about storytelling and showing how people can relate to one another "as human beings about shared concerns."

In primitive communities, he said, art was integral to a group's social organization, history and storytelling, and not separate from the community. He bemoans the fact that today art is "a commodity, something people invest in. He notes that art for Australia's indigenous communities is storytelling about their past, their current reality and oriented toward the future. Art, for Kelly, has the power to change culture in positive ways.

I asked him if positive human and social affirmation through art is where preventative peacemaking occurs. He replied, "Any art that I make in any form may be on exhibition in South America or Asia or anywhere, and while I sleep, this art is working in the world somewhere. We cannot know the implications, but little by little, you find that people are interested in the same things. And peace is a core element."

One of the topics the film, and in Kelly's conversation with me, is the normalization of war through toys and even through fashion. Kids, whether in Paris or New York, are using attractive battle gear as part of their play. Even cars, he told me, like the Humvee-like Hummer, can socialize people into normalizing war and violence.

"Peace and War/The Big Picture" includes Kelly's visioning of Pablo Picasso's 1937 anti-war oil painting "Guernica," depicting the suffering of people and animals in response to the bombing of the small market town of Guernica in Basque Country, Spain, by German and Italian allies of the Spanish Nationalist faction. The cruel tragedy of the bombing was all the greater because most of the people killed were women and children, as the men were away fighting the Spanish Civil War. Kelly visited Guernica at the invitation of a peace organization in the mid-'90s.

"I found a lovely city with children playing in parks. Neither the community or the town showed evidence of the once destroyed city. I created art in Guernica, installation art that represents dialogue."

Kelly's current work juxtaposes the destruction depicted by Picasso and the city's current peaceful status that invites viewers to see the story of past and present and engage "in dialogue."

"It's not a dogmatic thing," Kelly said. "It's the bigger story of finding our place in the world."

The film traces the origins of Kelly's images and at the end, with grace and rhythm, the director begins at the bottom of "Peace and War/The Big Picture" and moves up slowly so we can take in the path created by the images asking us to choose peace over violence to resolve conflict.

"Art can help to bring us together for peace. I have no way to prove that a work of art or theater or a film can stop a bullet from being fired," he said. "But it is my sincere belief — and a lot is predicated on my own life experience — that when you find something that helps you to change the world, like art, it helps you to think more compassionately and act more lovingly. I think, I believe, art has the power to do this. I do believe art can stop a bullet.

"For me, one of the parts of the film that struck me was when the actor Martin Sheen says, 'Now that you've seen this [art], now what?' He's saying we have a choice when we are dealing with human rights and social justice. Presently in the world, and certainly in the wider political world, in the areas of fairness and dignity, we are running at a deficit. I hope that my art, and the art I create in collaboration with others, will help redress this balance."

Art that evokes dialogue, he said, is where peace can take root and thrive.

Kelly, his wife and son have made Australia their permanent home since 1975.

"I can't imagine living anywhere else. It's home," he told me. "It's a safer and caring place, there is universal health care, education, and it is more community-minded. There is still more to do with our indigenous communities, but we are working on that."

Kelly followed up our conversation in an email and wrote, "Mark Street worked hard to engage a wide audience in the topic of peace and the role of art in helping to communicate this through the film. Producer Fiona Cochrane has 'steered' the project with considerable ability and grace and has now secured agreements for distribution.

"Both are interested in creating a 'community' on the film's website linking peace, human rights, social justice, environmental organizations as a way of letting others know we are all sharing the journey."

"Art is a lonely business," Kelly said at the end of our conversation. "You hang it on a wall and go back to your studio."