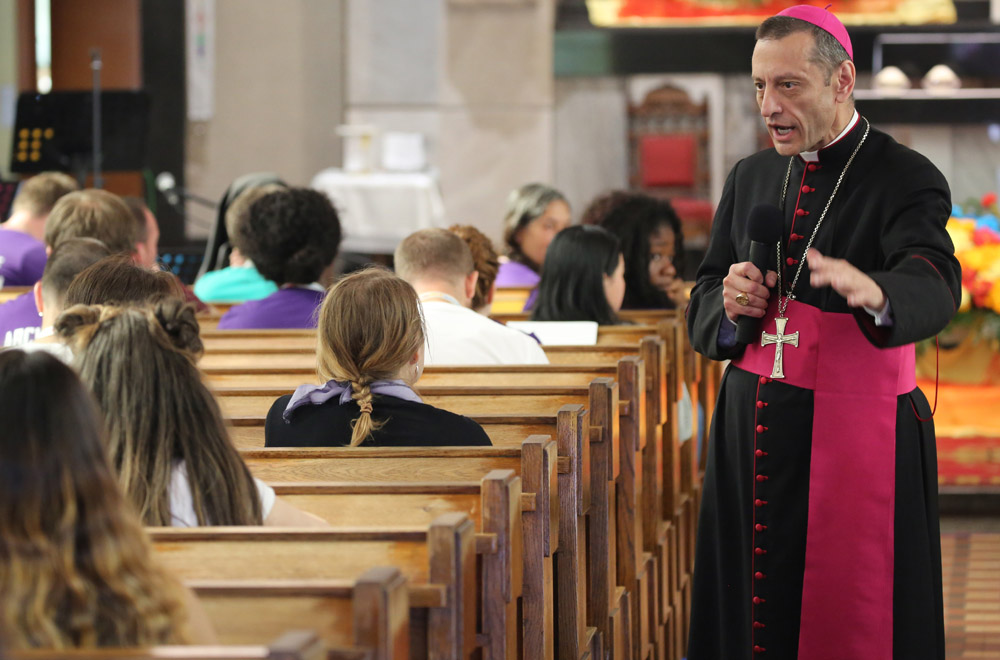 As the Synod of Bishops on youth and young adults prepares to open, one of the American delegate bishops said that for any efforts to minister to young people today to bear fruit, the church must first reclaim credibility by addressing the clergy sexual abuse scandal head on.

"I am going to advocate that the synod needs to make that a major topic now, without a doubt," said Bishop Frank Caggiano of Bridgeport, Connecticut, who spoke to NCR in an interview Sept. 27. "If you're going to speak relevantly to young people, you cannot but do that."

He added that he hopes the synod will produce "not just words but some significant initiatives in that regard."

The 59-year-old bishop said such a move is "essential," a word he repeated several times, for the Catholic Church to be seen as credible in its outreach to young people. He described the present abuse scandal now in a second phase "all about authenticity. It's about leadership being accountable. It's about transparency. I think the greatest scandal is when, you know, things are not accounted for, or hidden or not transparent. That shakes people's faith."

Caggiano added that "authenticity speaks powerfully to young people," and the church must demonstrate what it believes in how it lives and acts, and with the abuse crisis, how it responds.

"For young people, I think this is a moment for the church to recapture their imagination by using this as a moment of truth, humility and repentance and purification, and do what we have to do to hold people accountable. And those who remain, please God, to rededicate ourselves to lives of true personal holiness. That speaks powerfully," he said.

A first-time delegate, Caggiano will be one of six U.S. bishops participating in the Synod of Bishops on young people, faith and vocational discernment, which will run Oct. 3-28. He departed Monday for the Vatican, just days after he had returned from Italy, after leading his diocese's annual pilgrimage.

The synod, which is led by Pope Francis, will bring together 300-plus bishops and non-voting observers and participants from around the world to examine how the church can develop new ways to join young people in their faith journeys, or as the pre-synod working document puts it, "to accompany all young people, without exception, towards the joy of love."

While this will be his first Vatican synod, perhaps few bishops bring with them Caggiano's experience in youth ministry. The Bridgeport bishop is a regular speaker at major youth events, including World Youth Day, to which he serves as episcopal liaison for the U.S. Conference of Catholic Bishops. Since 2013, he has served as episcopal advisor to the National Federation of Catholic Youth Ministry. He is also chair of the U.S. bishops' subcommittee on catechism.

Caggiano, who is fluent in Italian but acknowledges his Spanish is a bit rusty, also arrives to Rome with experience running a synod of his own. 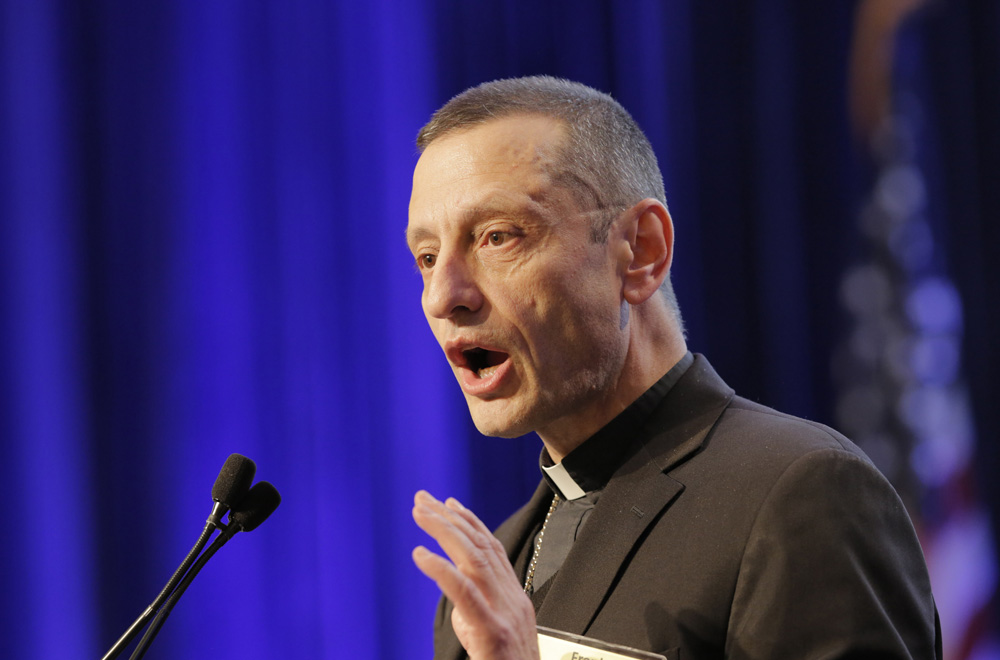 In February 2014, he convoked the first synod in the Bridgeport Diocese in more than three decades. Among its four themes was empowering youth. Twenty-five youth delegates participated in the synod's five general sessions, with another 400 youth co-delegates holding their own sessions. Caggiano also held a special listening session with the diocese's young people, something that has become a staple of his five years in Bridgeport and Fairfield County.

Some initiatives resulting from the diocesan synod, which closed in September 2015, have been the creation of a diocesan choir and the Catholic Service Corps. Caggiano said both programs have allowed young people to express their faith in new ways and have offered new entry points to encountering God.

A major takeaway from the process, Caggiano said, was "one person at a time," the idea of putting many different paths before youth and hoping one of them resonates.

"It's going to be almost like planting seeds: Some sprout earliest, some sprout later, but to be patient because this is the Lord's work, right? This is not about flashy headlines, this is about people's lives," he said.

As part of his preparation for the youth synod, he held another listening session with young people in his diocese Sept. 28, ensuring their voices would be among the final ones he heard before departing three days later for Rome.

"I'm going to ask them, so if you had an opportunity to address the synod, what would you say? You, as a young person, what is on your mind? What are your concerns? And I'm very curious to see what they come up with, to be honest," he told NCR ahead of the event.

From his work with young people over the years, he said many of the questions they have are affective in nature — "questions of the heart, not the mind" — about belonging and self-worth, connection and community. He said the synod working document, the instrumentum laboris, does a good job of summarizing these concerns and discussing relationships. An important question for the synod to address, the bishop said, is "what is the relevance of being a part of an established community, rather than creating my own community?"

That is particularly true in an age of social media, which the bishop says can play a key role in how the church connects with youth, but also something it must better understand in terms of how new technological advances impact not only their lives but also their physiological development. Caggiano said he plans to urge the synod to explore such issues further as part of his intervention.

The Bridgeport Diocese under Caggiano has worked to expand its social media footprint. The bishop has a weekly video series on his Facebook page, where he has also shared updates from the recent pilgrimage and his experiences to date at the synod.

Another challenge he sees for the synod to address is how to transmit the faith, primarily done by words in modern times, at a time when images are becoming a more predominant medium. In the Middle Ages, the church built great cathedrals and basilicas as a type of "living catechisms" conveying the faith, Caggiano said. He's not certain what that would look like today, but sees St. Thomas Aquinas' idea of truth, beauty and goodness as paths to God as an essential paradigm for ministry.

As for approaches to reaching young people who have left the church or considering such an exit, he sees accompaniment and apologetics — explaining and defending church teachings — as "two sides of one coin," believing arguments for one or the other as a "false choice."

"It's the journey and the destination," Caggiano said.

With the synod itself, he hopes it produces a document that provides a "general roadmap" that bishops can take back to their home countries and dioceses to implement in ways unique to each's culture and conditions.

"My hope is that the document will lay down a basic groundwork, and then it's going to be different in Nairobi as it is in New York as it is in you know, I don't know, Lima, Peru. But we'll all kind of be going foundationally in the same direction, even though it may look very different in the lived experience," the bishop said, adding it was important to allow the document "to become a living document and evolve."

In the U.S., Caggiano is well aware of the trends of people, especially the young, leaving organized religion behind. (Connecticut was even identified as a somewhat "ground zero" for Catholics leaving the church.) He has heard the "spiritual but not religious" axiom — what he defines as "spiritual is me, religious is we" — and is familiar with surveys that show people desiring a more welcoming and inclusive church. To him, it all comes back to the relevance of community, and the church making itself credible again. "And credible, in my mind, means authentic."

"All of that is different ways of saying we have to live what we believe. We have to love in the truly authentic way that Christ has taught us," Caggiano said. "I think young people who encounter communities like that then find the rationale to say you know what, I am spiritual but maybe it's worth being religious."