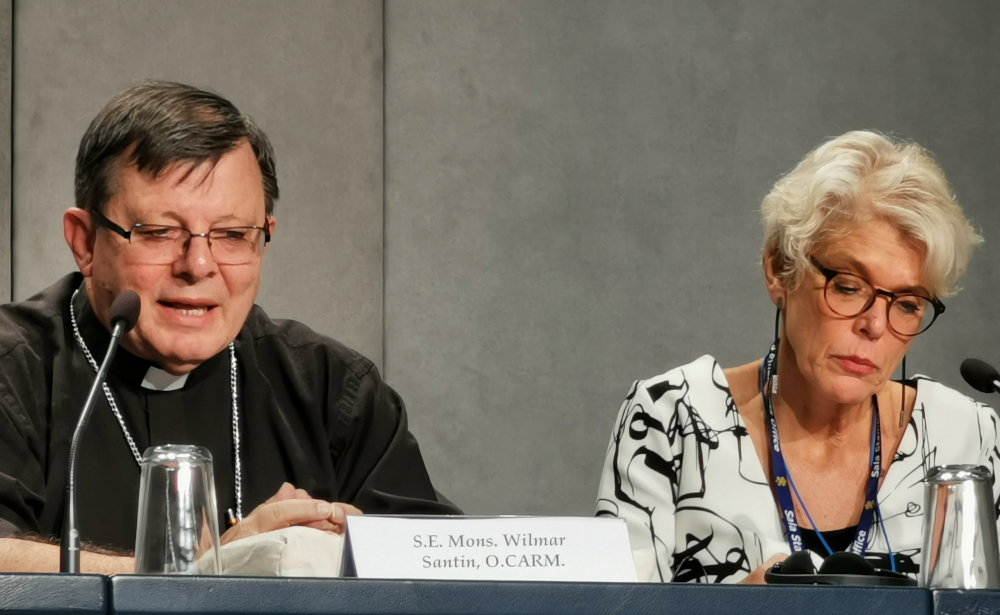 Brazilian Bishop Wilmar Santin of Itaituba speaks at a press briefing following a session of the Synod of Bishops for the Amazon at the Vatican Oct. 10, 2019. Also pictured is Cristiane Murray, vice director of the Vatican Press Office. (CNS/Junno Arocho Esteves)

Lay men and women involved in ministry have been fundamental in spreading the Gospel and furthering the Catholic Church's mission in the Amazon, a Brazilian bishop said.

Bishop Wilmar Santin of Itaituba, told journalists at a Vatican press briefing Oct. 10 that the formation of "ministers of the word" among the Munduruku indigenous community in his prelature helped advance the church's mission and presence.

The bishop said he was inspired to begin a permanent diaconate formation program for the indigenous community after attending a meeting with Cardinal Claudio Hummes, relator general of the synod, in Manaus, Brazil.

The cardinal had said that "Pope Francis told him he has a dream of seeing that every village has its own indigenous priest. They spoke about the difficulties and the pope said, 'Begin with what the church already allows: the permanent diaconate,'" the bishop recalled.

He began a diaconate program for the indigenous community as well as formation programs for eucharistic ministers and lectors.

However, he said, "we saw that it was much more important to begin with ministers of the word and not of the Eucharist." The humid climate and swarms of ants in Itaituba make it difficult to preserve the consecrated hosts that permanent deacons or eucharistic ministers distribute in the absence of a priest.

As of now, Santin said, there are 48 ministers of the word – 39 men and nine women – in the Munduruku community, who preach and pray in their native language.

The fact that the community can listen and pray in their own language, he said, "always evokes in my memory something that gives me a lot of joy."

"It reminds me of the second chapter of the Acts of the Apostles, on the day of Pentecost, when we hear the affirmation of the people who said, 'We have heard in our own language the wonders of God.'"

The presence of lay ministers also could help increase the church's presence in indigenous areas where there are no Catholic churches, he said, recounting the story of a man who belonged to an evangelical church.

In the course of a conversation, he said, the man revealed that he had "two brothers who were priests and a sister who is a nun."

"I asked him why he left the church," Santin said. "He told me, 'When I arrived, here, there was no Catholic church. I wanted to listen to the word of God, and I went to the church of the Assembly of God.'"

Santin told reporters, "We are not arriving in time to all the places because everything is centered on the figure of the father (priest). We have to change a bit the structure of the church, so it is more agile, so that it can advance faster, so that it doesn't depend just on the priest because if not, we will not fulfill our mission, which is to preach the word of God."