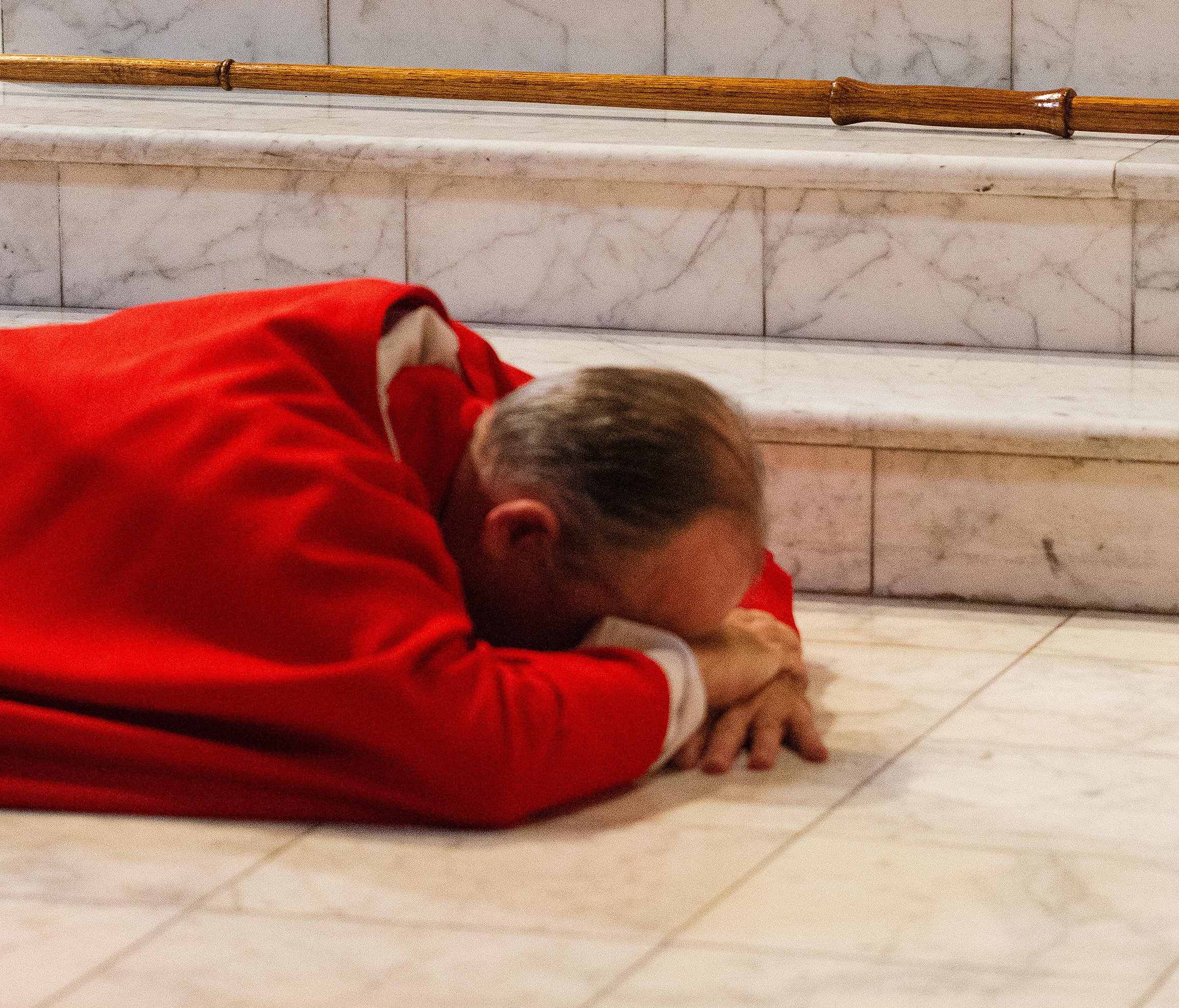 Having removed symbols of his office, his ring, miter, crosier and zucchetto, Bishop Barry C. Knestout of Richmond, Va., lies prostrate during the Mass of Atonement for victims of abuse Sept. 14., at the Cathedral of the Sacred Heart in Richmond. (CNS/The Catholic Virginian/Michael Mickle)

In celebrating the Diocese of Richmond's first Mass of Atonement for victims of abuse Sept. 14, Bishop Barry Knestout apologized to victims of clergy sexually abuse, likening church leadership to Jesus' condemnation of the Pharisees.

"Leadership was not listening to the cries of those who had suffered this abuse, who were blind to it, and who were often like Jesus' own condemnation of the Pharisees as whitewashed sepulchers -- clean on the outside, but full of a dead man's bones within," he said.

During the Mass attended by more than 300 people in the Cathedral of the Sacred Heart, Knestout said the church must confess its sins and express contrition for what it has done and failed to do.

"I am sorry for those who have suffered abuse. I am sorry to your families, who have had to carry that with you," he said. "I am sorry to this church of Richmond, the people of God who see the church torn apart, that we failed so miserably and are shamed before the whole world because we were called to so much more, but we fell short, so far short, of what we should have done."

The bishop said that if healing is to occur, reparation is required of the church. Referring to what he stated in his first pastoral letter, "From Tragedy to Hope," issued earlier that day, Knestout said he would make public the names of clergy "credibly accused" of abuse because victims "need to see that someone is being held to account for the damage they have done in order for the victims to move forward."

That list, he said, would be the result of an independent review of clergy personnel files, working with the Diocesan Review Board, to assure, "We can be held accountable."

Knestout also announced funds were being set aside for an abuse victims' assistance fund to provide counseling to those who have experienced abuse from clergy.

Noting the church "needs to see Christ" in abuse victims, Knestout said, "They cry out to God for justice, to be made right, to be repaired. God hears those voices even when leaders in the church didn't, and we know of the terrible nature of those sins and the terrible failure of leadership."

He said all that had been done -- and not done -- in responding to victims "had to be brought to light."