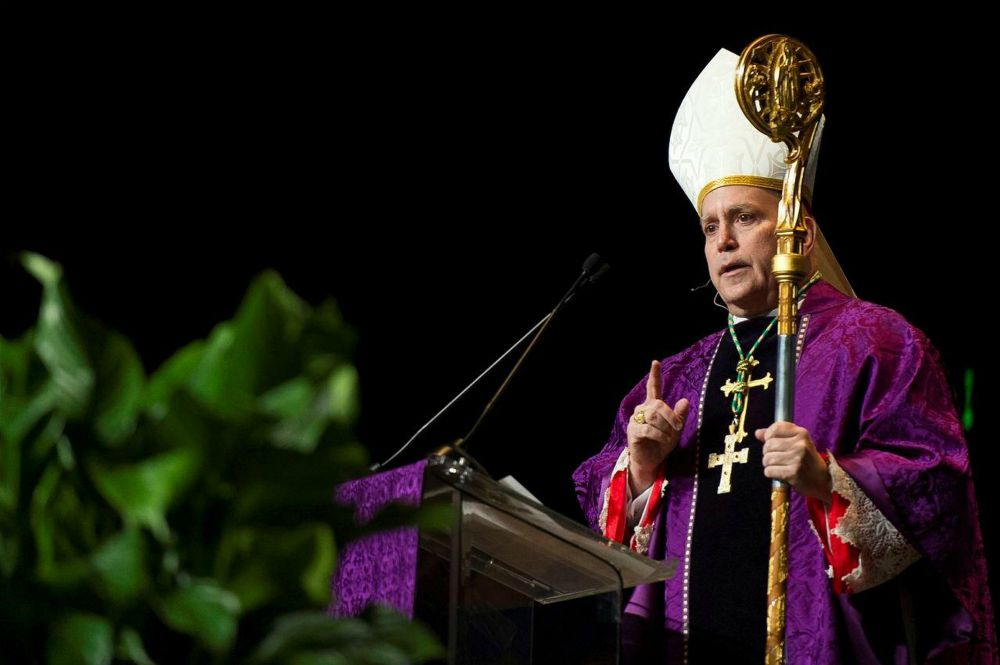 Archbishop Samuel Aquila of Denver is pictured in a 2013 photo. Citing 'Humanae Vitae,' Pope Paul VI's 1968 encyclical, Aquila said the sexual revolution has brought darkness to the church's clear teaching on human sexuality, including that sex is restricted to marriage between a man and woman. (CNS/Catholic Register/Daniel Petty)

This article was updated at 5 p.m. Central Time to include comments from theologian Todd Salzman.

Accusations of sexual abuse and misconduct by former Cardinal Theodore McCarrick and within several U.S. seminaries have rematerialized past charges placing gay priests and homosexuality at the root of the church's escalating crisis, positions backed in recent days by a handful of bishops.

"It is time to admit that there is a homosexual subculture within the hierarchy of the Catholic Church that is wreaking great devastation in the vineyard of the Lord," wrote Bishop Robert Morlino in an Aug. 18 letter to Catholics in the Diocese of Madison, Wisconsin.

Morlino said the revelations around sexual abuse in recent weeks — from the Pennsylvania grand jury report, and allegations against McCarrick, which included grooming and sexually abusing seminarians and young adult priests — have left him tired: "of people being hurt … of the obfuscation of truth … of sin."

He pointed to a deeper crisis of acceptance and diminishment of sin, saying "we have refused to call a sin a sin," and urged the church to resist becoming a refuge for sin, including "deviant sexual — almost exclusively homosexual — acts by clerics."

"We are talking about acts and actions which are not only in violation of the sacred promises made by some, in short, sacrilege, but also are in violation of the natural moral law for all. To call it anything else would be deceitful and would only ignore the problem further," Morlino said.

He continued: "There has been a great deal of effort to keep separate acts which fall under the category of now-culturally-acceptable acts of homosexuality from the publically-deplorable acts of pedophilia. That is to say, until recently the problems of the Church have been painted purely as problems of pedophilia — this despite clear evidence to the contrary. It is time to be honest that the problems are both and they are more."

The 2011 John Jay College of Criminal Justice study, commissioned by the U.S. Conference of Catholic Bishops, found no correlation between homosexual identity and the sexual abuse of minors, or that homosexual priests were more likely to abuse minors than heterosexual priests — findings consistent with other studies. Likewise, it found the period of decline in incidents of priestly sexual abuse aligned with the timeframe when large numbers of gay men entered seminaries, beginning in the late 1970s and through the '80s. 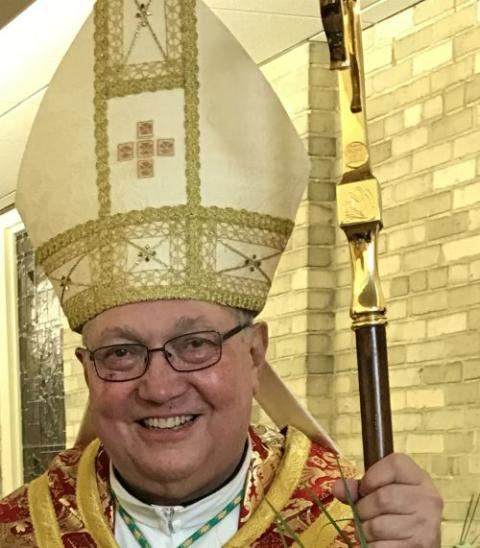 The study also said it was inaccurate to refer to abusers as "pedophile priests," given that less than 5 percent of alleged abusive priests displayed behavior consistent with pedophilia, and the majority of victims examined in the report were pubescent or postpubescent minors.

Morlino added in his letter that church teaching does not deem homosexual inclination sinful in itself, "but it is intrinsically disordered in a way that renders any man stably afflicted by it unfit to be a priest."

The statement from Morlino, along with similar ones from at least two other bishops, stand out from others made by dozens of fellow bishops who have focused their comments on apologizing and calling for concrete actions. They follow a series of postings in recent weeks from conservative Catholic websites, including Church Militant, the Lepanto Institute and LifeSiteNews, attempting to link the clergy sexual abuse scandal to gay priests and calling for their removal from church ranks.

"It's not really a surprise, and I think it's a disgusting attempt to reinforce the institutional church's handwashing of the sex abuse of children and cover up that went on for so many years," said Marianne Duddy-Burke, executive director of Dignity USA, an advocacy group for lesbian, gay, bisexual and transgender Catholics, which will mark its 50th anniversary next year.

Todd Salzman, a theologian at Creighton University who studies moral theology and sexual ethics, said focusing on the sexual orientation of abusive priests misses the issue, which largely has to do with clericalism "that has promoted the structural sin of the abuse of power" that led to both the sexual abuse of minors and the cover-up by bishops.

"The issue is an issue of power, an issue of maturity and dealing with one's own sexuality and living in relationship celibately in terms of one's priesthood," he told NCR.

The blaming of gay priests for the church's clergy abuse crisis has been a recurring theme since the scandal first exploded nationwide in 2002 following the Boston Globe's investigations. The debate's recent rise followed accusations against McCarrick, the retired former Washington, D.C. archbishop, of sexual misconduct with adult seminarians in addition to abusing minors, as well as reported instances of sexual abuse and misconduct within several U.S. seminaries.

While studies have found the majority of abuse victims have been male, such statistics don't mean that all, or even most, gay priests are abusers or that being gay equates to being a sexual offender, said Jesuit Fr. James Martin, editor at large for America magazine and author of Building a Bridge: How the Catholic Church and the LGBT Community Can Enter Into a Relationship of Respect, Compassion, and Sensitivity.

"Overall, it's a stereotype, and should be resisted," he told NCR.

The 2011 John Jay report found 81 percent of abuse victims were male, but did not link that to a homosexual orientation among abusive priests; instead, the authors suggest greater access to young boys as a more likely factor.

Martin said he knows hundreds of healthy, celibate gay priests, with many too afraid to come out to anyone but their closest friends. Attempts to purge the priesthood of gay men, he added, would leave many parishes, schools and other church ministries unstaffed.

As for Morlino's letter, the Jesuit author, who will be giving a lecture at the World Meeting of Families in Dublin on welcoming LGBT families into parishes, said it'd likely be viewed as the latest occasion by the church to stereotype and marginalize LGBT people.

The Madison bishop's letter drew wide response on Catholic social media, both supportive and critical. Among those lending their backing to Morlino was Denver Archbishop Samuel Aquila.

A day earlier, Aquila retweeted a column in the National Catholic Register carrying the headline "Active Homosexuality in the Priesthood is at the Root of This Crisis."

In his own letter Aug. 13 addressing the abuse crisis, Aquila echoed Cardinal Daniel DiNardo, USCCB president, in saying "the church is suffering from a crisis of sexual morality."

"Sadly, too many, both clergy and lay, have listened more to the world than to Christ and the Church when it comes to human sexuality," Aquila wrote. "The consequences of the worldly approach to sexuality are clear in the distortion of this precious gift and the confusion about sexuality that grows daily."

Citing Humanae Vitae, Pope Paul VI's 1968 encyclical, Aquila said the sexual revolution has brought darkness to the church's clear teaching on human sexuality, including that sex is restricted to marriage between a man and woman. He added the separation of sex from its procreative aspect — allowing one to "justify just about any sexual act" — has led to negative consequences to the church and society.

"The sexual revolution occurring in our culture, which essentially says, 'Anything goes if adults consent to it,' is not the way of God and only leads to where we are today," he wrote.

Others have cited Catholics' widespread rebuff of Humane Vitae, which barred Catholics from the use of artificial contraceptives, as major factors leading to the church's abuse scandal today.

"The rejection of Pope Paul VI's prophetic encyclical Humanae Vitae by so many in the Church, including at its highest levels, has come to fruition," wrote Timothy Busch, founder of the Napa Institute in a statement on the McCarrick scandal. "It is time we demand sound teaching and the action of every Catholic, Lay and Ordained."

In a nearly eight-minute video titled "Sexual Misconduct: Pruning and purification continues within the church," Bishop Thomas Paprocki of Springfield, Illinois, called for "a profound spiritual renewal at all levels of the church" concerning its teachings on chastity and sexual morality.

"I say all levels of the church because the sexual revolution of our secular world has obviously infected the church at all levels," he said.

Paprocki said Humane Vitae "prophetically and accurately predicted the hazards of artificial birth control" before he highlighted the large percentages of U.S. Catholics who disagree with church teachings on contraception, cohabiting before marriage and same-sex marriage.

"Clergy as well as lay people have far too easily rationalized why and how the church's moral teachings on sexuality and chastity do not apply to them, resulting in the scandalous situation in which we now find ourselves," Paprocki said.

Salzman said that attempting to reduce the clergy abuse scandal down to a sexual ethical issue "fundamentally missed the point of power and power structures in the church, and the abuse of power that requires fundamental reform."

"To use reference to the sexual revolution or the Catholic faithful's rejection of Humanae Vitae as somehow related to the sex abuse scandal is just another way to project onto society, or the laity in the church, a distorted notion of collective responsibility," he said. "The responsibility for this crisis resides solely with abusive priests and bishops, bishops who cover up abuse and do not work towards foundational structural reform in the church, and the culture of clericalism."Attempts by the church to blame the outside culture for its problems has been seen with other issues, Duddy-Burke told NCR, and fails to recognize "something deeply, deeply corrupt and rotted at the core of our church's systems."

"It just reflects a refusal by church officials to take any responsibility for a problem that lies at their feet," she said.

A version of this story appeared in the Sept 7-20, 2018 print issue under the headline: Bishop Morlino, others charge 'homosexual subculture' for clergy abuse crisis.