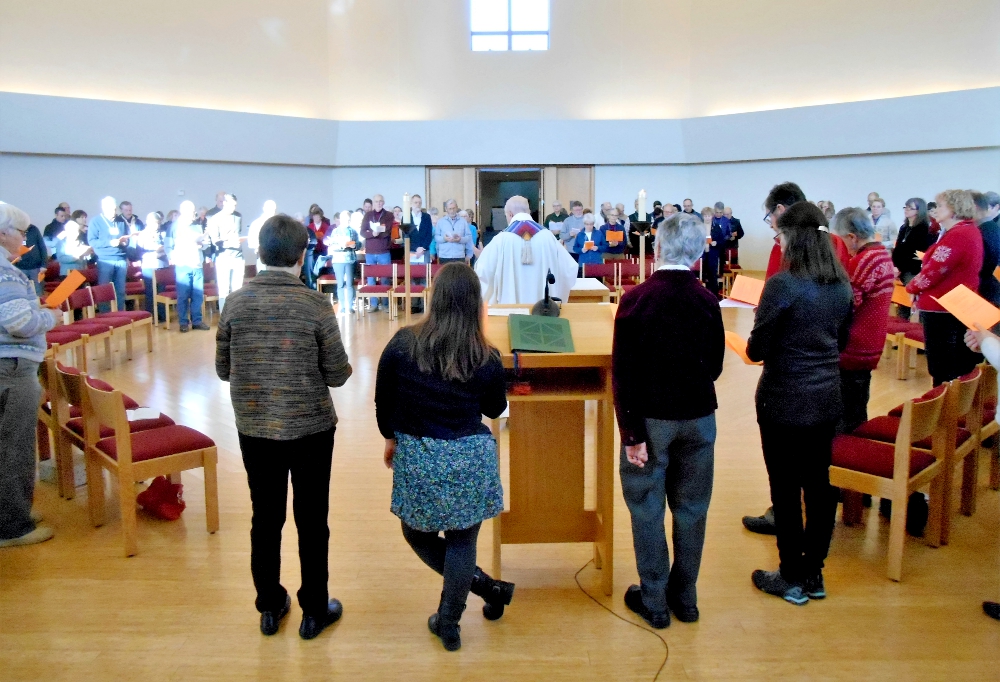 At the 4 p.m. Saturday Vigil Mass at St. Mary Church here, Fr. John Blewett recites the prayers with his back to the congregation. Only occasionally does he turn around to face the worshipers gathered on this typical Wisconsin winter afternoon of 9-degree temperatures.

Blewett is accompanied by three altar boys (the parish prohibits girls from serving). His hands are neatly folded in the formal prayer position. At Communion, there are no lay ministers to dispense the sacrament.

There is no small-talk banter among the congregation about the weather or football. The Mass is preceded by a half-hour recitation of the rosary, setting the somber liturgical mood.

Before Mass, some parishioners turn to the parish bulletin, which features an article arguing that a Milwaukee pastor — who declared himself gay in an NCR article — has endorsed sin.

Blewett is a member of the Society of Jesus Christ the Priest, a community based in Spain brought to the Madison Diocese eight years ago by Bishop Robert Morlino. Blewett oversees a parish recovering from turmoil, riven by a gap between those uncomfortable with pre-Second Vatican Council practices and supporters who welcome a more traditional flavor of Catholicism.

Located 71 miles southwest of Madison, near the Iowa border, the parish is the centerpiece in Morlino's efforts to reshape the diocese after arriving in 2003 from Helena, Montana. As Pope Francis declares a welcoming church, the parish leadership here has dug in its heels. Morlino, a former Jesuit and seminarian professor with roots in Scranton, Pennsylvania, publicly says he is in accord with Francis. At the same time, he embraces the concept that the church is better off smaller in number if its adherents remain zealous.

"Who am I to judge?" has become the emblematic public utterance of Francis. By contrast, critics see a regular cascade of judgments from the chancery offices and Morlino himself. During his 15-year tenure in Madison, Morlino has:

Regarding St. Mary and St. Augustine, an adjacent parish that serves the university community at the University of Wisconsin-Platteville, Morlino has held firm, resisting petitions to change the priests there. 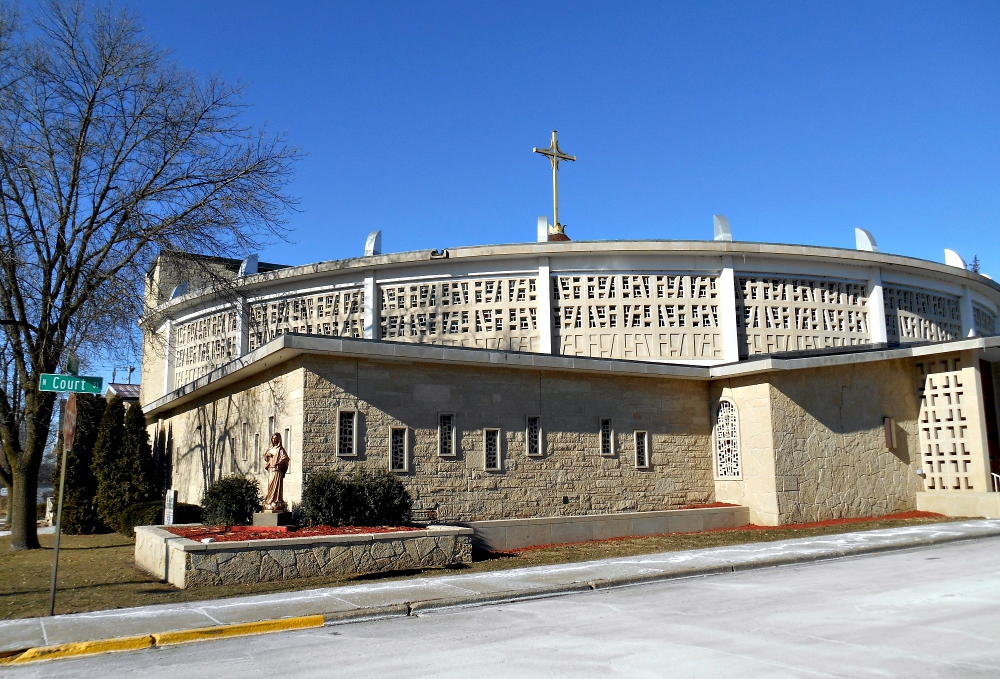 Liturgy frequently becomes a battleground when Catholics argue with each other, and so it has at St. Mary. When the Society of Jesus Christ the Priest came here in 2010, controversy over changes they instituted filled the pages of the local Platteville Journal. The priests of Society of Jesus Christ the Priest instituted Mass in Latin, and while the Saturday vigil Mass remains in English, the celebrant's back to the congregation is a pre-Vatican II practice largely abandoned in most American parishes.

Parishioners were told that non-Catholics were going to hell. Liturgical rubrics were enforced in a restrictive manner. A confirmation sponsor requesting Communion in the hand, a common practice in most U.S. dioceses, was refused the sacrament.

The reaction was swift. Forty percent of the parishioners signed a petition urging the bishop to oust the new leadership. Morlino responded by threatening an interdict, a punishment rarely invoked, that would deny the sacraments to those opposed to the pastors he installed.

St. Mary suffered a decline in attendance and finances. Weekly collections went from $11,500 to below $3,000. The parish school closed, with many of its supporters blaming the uproar in the parish created by the new clerical team.

Many of the parishioners who were upset with the direction of the parish moved on to other congregations. Richard Wagner, a member of a local Presbyterian church, estimated that his congregation has brought in some 30 families who used to attend St. Mary.

"They're not being fed," he said over lunch at a local restaurant, describing why some Catholics exited the parish. At St. Mary, "you have to eat Latin."

His wife, Kristie, raised a Catholic, is a Sunday school teacher at the Presbyterian church, assisting fellow teachers there in understanding the Catholic questions of some of the students.

Other former St. Mary parishioners have landed at the local Methodist congregation. Some attend Mass at Catholic parishes in nearby towns not under the jurisdiction of the Society of Jesus Christ the Priest priests.

One former parishioner, a local business owner who wanted to remain anonymous, told NCR that the Catholics in Platteville are still divided. Even after eight years, emotions are still raw.

He was bothered by the priests of the Society of Jesus Christ the Priest regularly repeating that non-Catholics were damned.

If St. Mary is the prototypical parish for the Morlino era, the community at Holy Wisdom Monastery in Middleton, on a hilltop overlooking the city of Madison and its picturesque lakes, is its antithesis.

The Sunday service at Holy Wisdom retains most of the Catholic liturgy, but includes women preaching and presiding. Congregants pass the eucharistic bread and wine among themselves. Holy Wisdom declared itself an ecumenical community in 2006, with a congregation drawn from many faith backgrounds. It is independent of the diocese and Morlino has warned priests to stay away.

For some Catholics disenchanted with Morlino, the community has become a spiritual home. Yet members of the congregation emphasize that the ecumenical thrust of the community, rooted in the Benedictine tradition, is not just a haven for those opposed to Morlino.

"It's much more than that," said Dick Wagner (not related to the previously-quoted Richard Wagner), a member who was attracted to the community by its prayer rituals, including Taizé days of reflection and other forms of monastic prayer. The monastery community bulletin notes a series of parish-like activities, including religious education for children, social justice committee meetings, and pastoral support for those encountering difficult times. 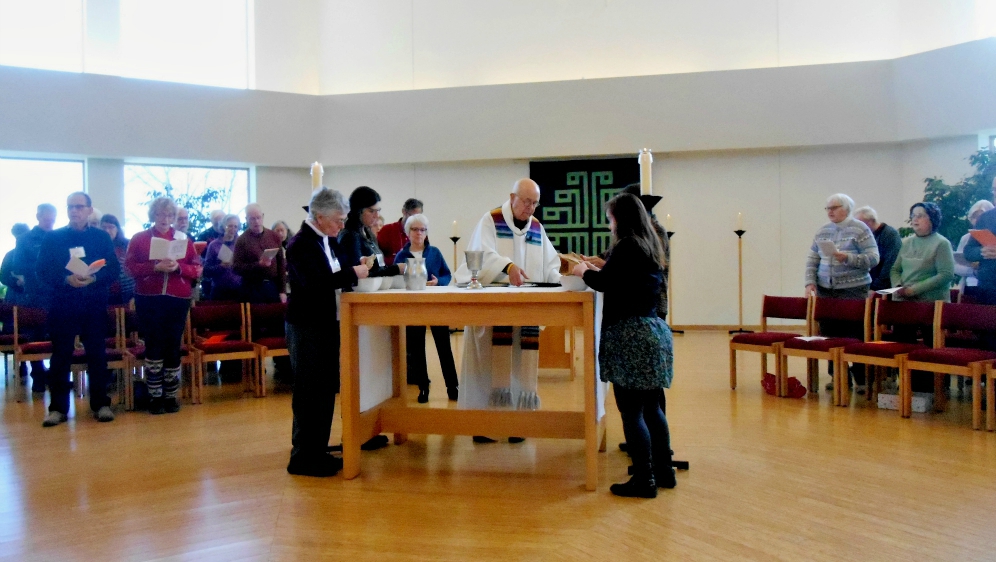 Joyce Wodka said the Wisdom community experiences an increase in membership whenever Morlino issues another controversial edict or makes an inflammatory statement. On one recent Sunday, the meeting space was nearly filled with more than 200 congregants.

"Since Morlino has been our bishop, the Catholic Church has become less inclusive," said Wodka.

The Wisdom community tries to fill that void. Welcome are Methodists, Lutherans, other Protestants and the occasional Buddhist. Sometimes the Sunday service is led by an ordained Protestant minister (the duty of Sunday presiding and preaching is rotated among members, with 16 homilists and six presiders). Maintenance of the expansive grounds focuses on the environment, keeping it as close as possible to its natural Wisconsin prairie state.

"It's catholic with a small c," said Wodka. She added that the Wisdom community is about "imagining the church of the future."

A particular sore point in the Morlino tenure has been strained relations with the LGBT community. The Wisdom community consciously offers welcome.

Vicki Clark, who is in a same-sex civil marriage with her partner, Lynn Lemberger, said that the Wisdom community is accepting. "People know us as a gay married couple. We are allowed to be who we are," she said.

Joseph Hasler, a Reedsburg attorney and Catholic, said that Morlino has introduced to the diocese a vision of 15th-century Catholicism. "He believes he is the sole arbiter of all that is Catholic," he said.

"You hear the positive news emanating from Rome," said Hasler, referring to the direction Francis has taken the wider church. "But it isn't going to happen here." 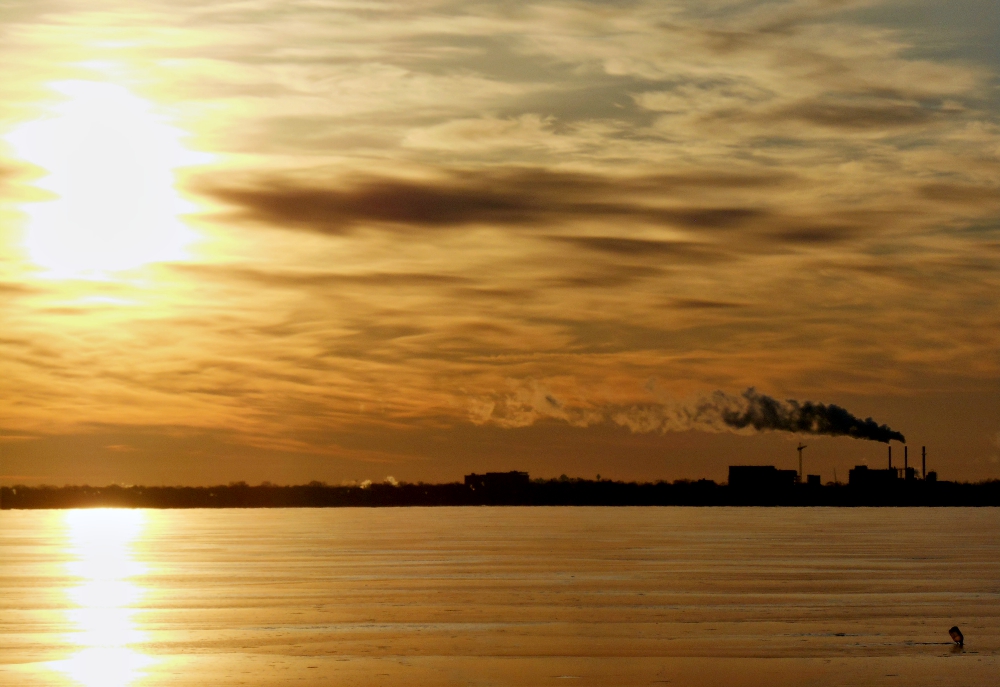 Madison, Wisconsin, is seen from nearby Middleton. (NCR photo/Peter Feuerherd)

Morlino, by contrast, has brought a culture-warrior emphasis to the diocese, focused on sexual morality and using demands for reverence at Mass as a way to exclude, said Hasler.

Groups such as Call to Action, once active in opposition in the early Morlino years, have largely dropped their efforts. A frequent complaint among them is that the optimism Francis has brought to the wider church has largely bypassed southwest Wisconsin. They await four years for the retirement of Morlino when he reaches the mandatory retirement age of 75.

Morlino and the priests of the Society of Jesus Christ the Priest declined NCR requests for comments.

Meanwhile, the work of the diocese and parish continues. St. Mary is marking its 175th anniversary. A banner outside St. Mary promotes a planned re-opening of the parish school this year. The campus ministry at nearby St. Augustine has been infused with new building projects despite the decline in income. Still, priestly edicts struggle to find an audience at the parish.

Parishioners are urged to kneel for Communion and receive the host on the tongue. At St. Mary, many parishioners still accept the option of Communion in the hand. At each Communion post are temporary kneelers, used by some before receiving the sacrament. The congregation is split, as the options can be bewildering.

Parish shopping is a regular endeavor. "There are many Catholic churches. I can go down the road 10 minutes from here and go to a church that doesn't preach what these guys preach," said the estranged St. Mary parishioner quoted earlier.

Perhaps the divisions in the Madison Diocese are best reflected in differing metaphors about smells, both pleasing and rancid.

In a 2009 ordination ceremony for the Society of Jesus Christ the Priest, Morlino congratulated the new clergymen. He offered some advice, telling them that their goal should be "to smell good to the people. You will be aromatherapy for those of a spiritual sort."

By contrast, four years later, Francis suggested that pastors should accompany their people, welcoming both saints and sinners. He urged them not to be "collectors of antiquities or novelties." Rather, he said, they should be like shepherds who take on the smell of their sheep. He did not mention aromatherapy.

This story appears in the The Field Hospital feature series. View the full series.
A version of this story appeared in the March 9-22, 2018 print issue.