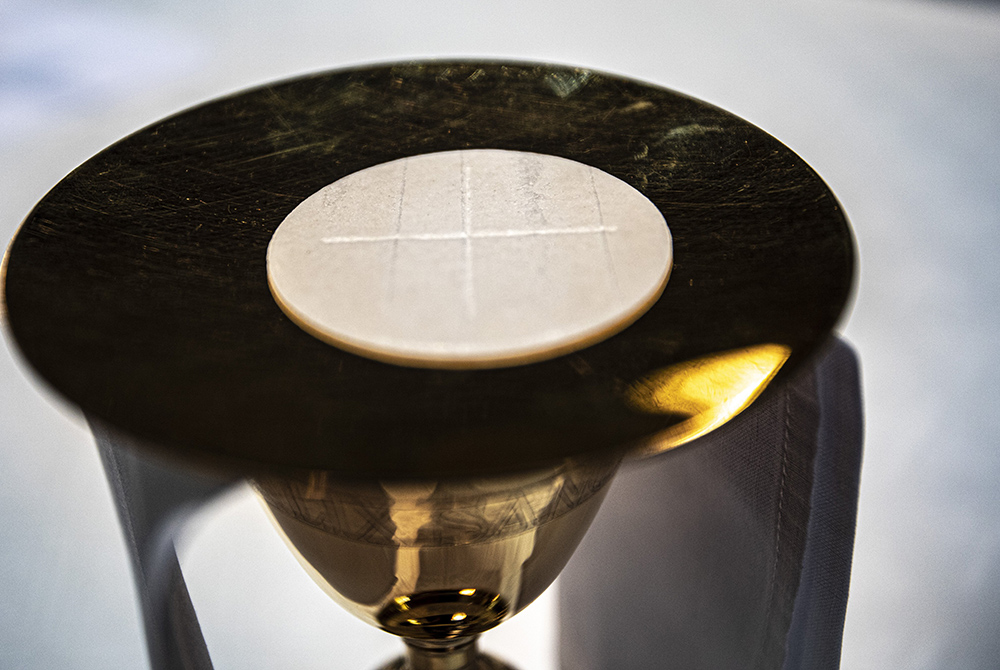 The Eucharist rests on a paten on an altar in a cathedral. (CNS/Chaz Muth)

Following a virtual meeting of the U.S. Catholic bishops, at which a majority of the country's hierarchy voted to advance a divisive document on the Eucharist, the U.S. bishops' conference is seeking to clear up its own mixed messaging and is insisting the eventual document will no longer target Catholic politicians.

A June 21 document published by the bishops' conference states "there will be no national policy on withholding Communion from politicians" and notes that the timing of the document is related to "declining belief and understanding of the Eucharist among the Catholic faithful," which has been of concern "for some time."

The new messaging from the bishops' conference, however, has now undergone some revisions from their original proposal.

The inspiration for the original document, as outlined by a Jan. 19 memo from U.S. bishops' conference president Archbishop José Gomez of Los Angeles came from a working group established to address "problems" raised by President Joe Biden being a pro-choice Catholic.

Furthermore, a May 22 memo, just weeks before the meeting, stated that the proposed document would have a special section on the reception of holy Communion for "Catholics who are cultural, political, or parochial leaders." 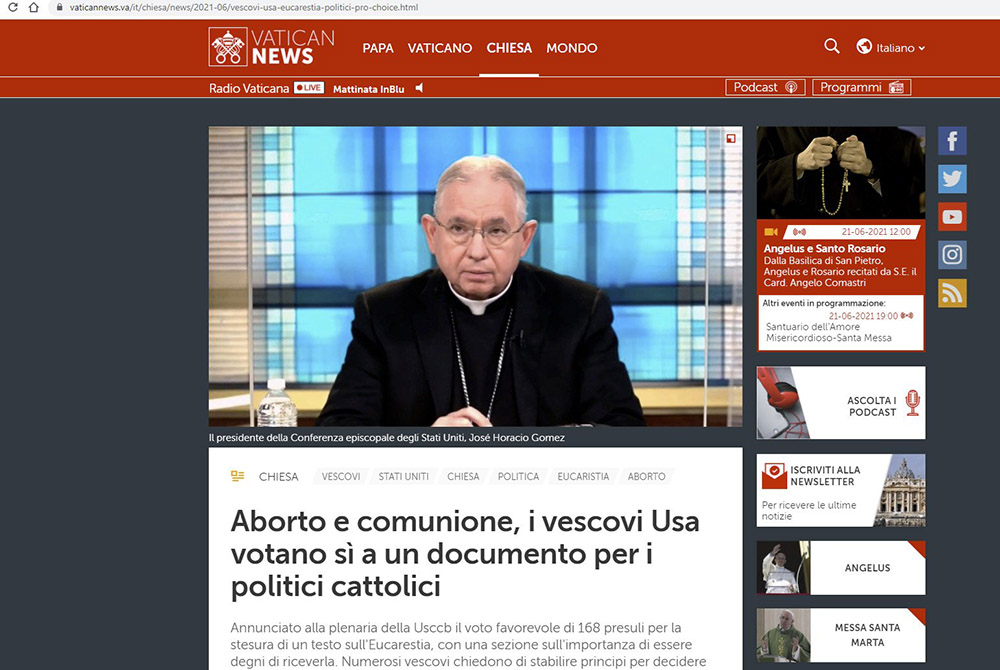 Archbishop José Gomez of Los Angeles, president of the U.S. Conference of Catholic Bishops, is pictured in this screen capture from Vatican News, an official website of the Vatican, in an article about the U.S. bishops' June 17 approval to draft a document on the Eucharist. (CNS photo)

"There have been many oars in the water about this issue," Archbishop John Wester of Santa Fe, New Mexico, told NCR.

Wester, who spoke during the meetings to express concerns about moving forward with the document, acknowledged the confusion and mixed messaging about who the document is intended for and its scope. Following the meeting, he said that as plans for the document advance, he wants it to focus on the beauty and meaning of the Eucharist and to avoid questions of worthiness to receive Communion.

"There should not be any element in that document regarding eucharistic consistency," he insisted. "That's a whole separate issue and has nothing to do with Eucharist itself."

Bishop John Stowe of Lexington, Kentucky, also questioned the narrative that the original messaging surrounding the document was not political in nature.

"Even the discussion at the USCCB [U.S. Conference of Catholic Bishops] meeting indicated that the document was politically motivated and the supporters provided a very mixed message," he told NCR following the meeting.

"In popular perception it is about whether President Biden will be able to receive Communion or not, and that is what I am hearing from ordinary Catholics," said Stowe. 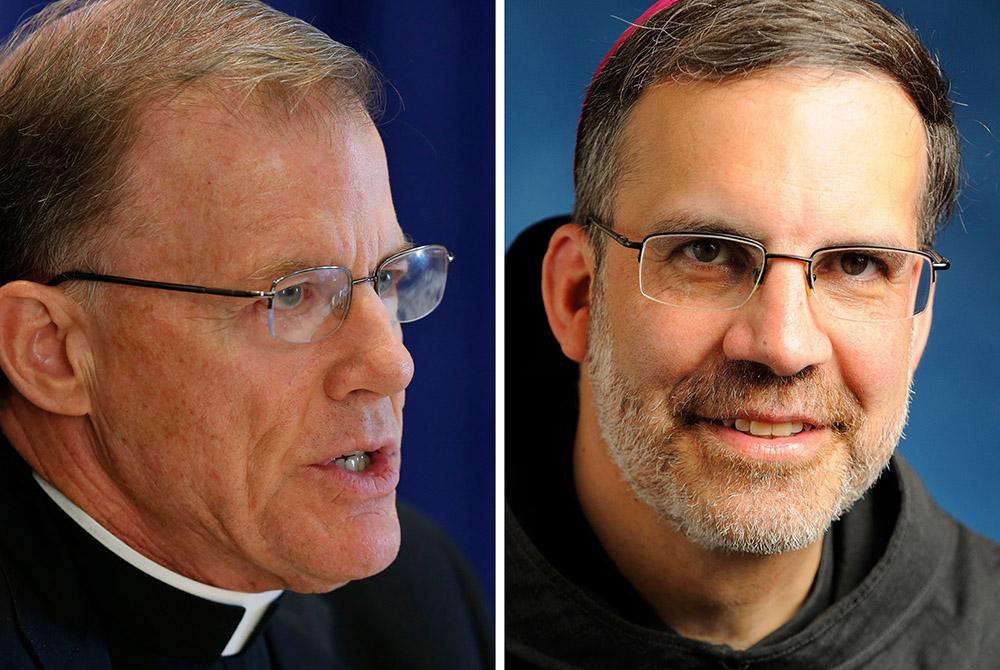 Since the vote, headlines that the U.S. bishops' were seeking to deny Biden Communion have dominated newspapers, talk radio and cable news, even getting a special unfavorable mention by Catholic host of "The Late Show" Stephen Colbert.

When asked about the bishops moving forward with the document on June 18, Biden brushed off a question on the vote as a "private matter," but added "I don't think that is going to happen."

Similarly, on June 21, White House Press Secretary Jen Psaki said Biden does not see his faith "through a political prism."

Despite multiple bishops insisting that the need for the document was due to Biden and other pro-choice Catholic politicians, in the week since the vote, other bishops have sought to reframe the conversation away from Biden.

Bishop Kevin Rhoades, chairman of the Committee on Doctrine, which will draft the document, told Our Sunday Visitor that it "will be addressed to all Catholics."

"All of us are called to continual conversion and to eucharistic consistency," said Rhoades. 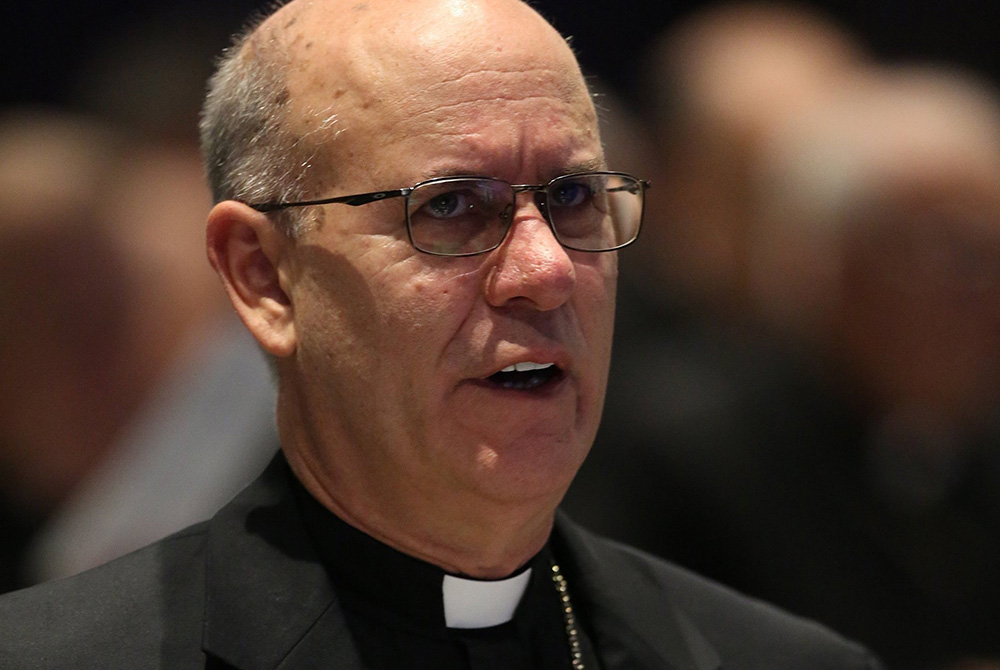 On his personal blog, Boston Cardinal Sean O'Malley wrote that "I think, early on, there were some who envisioned the document as dealing with public figures and the reception of the Eucharist," adding that now "the Committee on Doctrine has adjusted it to avoid focusing on categories of individuals but trying to develop a theological document around the Eucharist and the question of preparedness and Eucharistic consistency."

In a June 22 email to his archdiocese, Archbishop William Lori of Baltimore offered a similar interpretation.

"It is important to note that the bishops did not vote to implement a national policy to deny Holy Communion to politicians who reject Church teaching," he wrote. "Rather, in light of the decline in belief and participation in the Eucharist, the bishops voted to permit their Committee on Doctrine to begin drafting a pastoral document on the Eucharist."

"It is not disciplinary in nature, nor is it targeted at any one person or class of persons," he added.

Bishop Shawn McKnight of Jefferson City, Missouri, who raised concerns during the first day of the bishops' meeting, told NCR after the vote that the final document should not single out any group of Catholics, such as Catholic politicians.

"It seems to make the most sense that we keep our eye focused on the mystery of our Communion, that is both symbolized and enacted by the celebration of the Eucharist," said McKnight.

During the three days of virtual debate, where over 40 bishops spoke for and against the document, McKnight said he believed both sides made valid points.

He said the final document will address questions of "integrity and what it means to receive holy Communion," he added that "that is primarily the obligation of the individual and their conscience."

Ultimately, he said he hopes that whatever is produced will focus on how to be a "good parish community" eager to welcome people back to Sunday Mass.

"We should not simply be focused on internal matters, we need to have a view towards how do we get more people to the Eucharist," McKnight said.

As plans for the document advances, Gomez has announced there will be "a "series of regional meetings and consultations" to discuss the document before the bishops' meeting in November to discuss a document draft.

Santa Fe's Wester said he will continue to insist during these meetings that after a year of tremendous loss of life from COVID-19, economic hardship, and racial reckoning, the scope of the document should be limited and not theological in nature.

Stowe concurred, saying the priests he has spoken with since the conference vote have cited the bishops' conference's 2006 document on the Eucharist and questioned why another one is needed at this time.

"We need to be issuing a short statement that 'the church is there for you and let's continue to journey together so we can face these issues together,' " said Wester.

Otherwise, he warned, "I fear we're going to sound tone-deaf."

This story appears in the Bishops, Biden and Communion feature series. View the full series.
A version of this story appeared in the July 9-22, 2021 print issue under the headline: Bishops to draft Communion document.