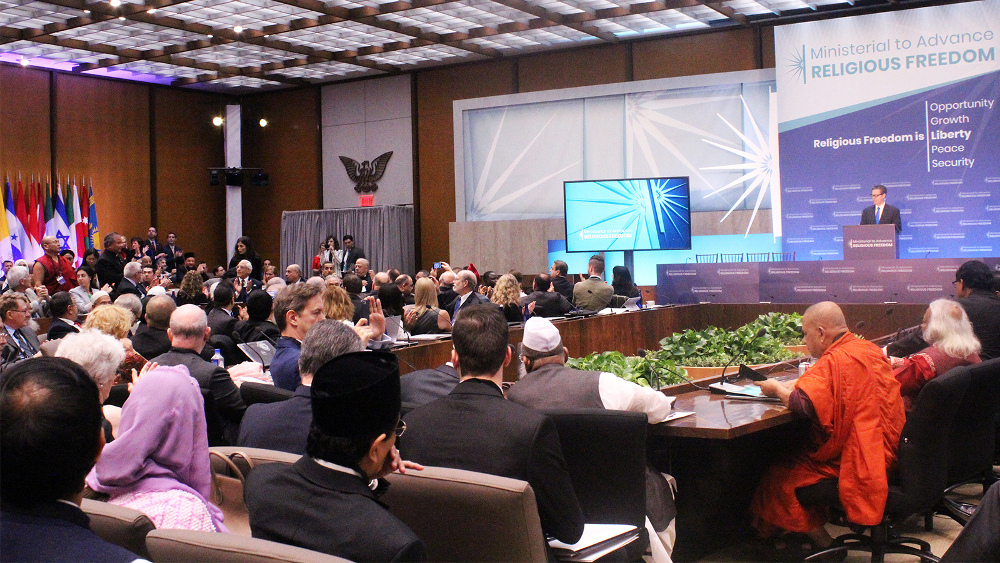 Survivors of religious persecution, left, stood and were recognized by Sam Brownback, at podium on right, U.S. ambassador-at-large for international religious freedom, during the start of the Ministerial to Advance Religious Freedom at the State Department on July 24, 2018. (RNS/Adelle M. Banks)

U.S. Ambassador-at-Large for International Religious Freedom Sam Brownback opened a summit at the State Department this week by urging leaders from a range of faiths to work together to help the persecuted across the globe.

"We need your faith in action to move the world to not just tolerance of differences — although that's important — but unfortunately, that bar is just too low," said Brownback, a former Republican Kansas governor and U.S. senator, on Tuesday (July 24). "We must move to a place where people genuinely care and love one another, no matter our differences. You must help us get there."

He listed the faiths represented in the room of some 350 representatives from 80 countries, including Muslims, Jews, Christians, Buddhists, Hindus, Sikhs, Baha'is, Yazidis and others.

"We were as inclusive as possible because we wanted to include everyone of every faith or no faith at all, everyone who cares about religious freedom and who will join us in this cause," said the ambassador nominated by President Trump in July 2017 and confirmed in January 2018. "Religious freedom really, truly is for everyone. It's a right given by God and it's a beautiful part of our human dignity."

The website for the first-ever event, called the Ministerial to Advance Religious Freedom, said it aims to bring foreign ministers and religious leaders together to "identify concrete ways to combat religious persecution and discrimination, and ensure greater respect for religious freedom for all."

Last week, Secretary of State Mike Pompeo told reporters he hoped the three-day meeting "will move many countries in the right direction on religious freedom. We think that's an invaluable part of American diplomacy and the capacity to shape America's vision in the world."

In his opening remarks, Brownback listed examples of religious persecution of religious minorities, from the ethnic cleansing of Rohingya Muslims in Myanmar to the victimization of Yazidis and Christians by the so-called Islamic State in Iraq. He also noted that U.S. pastor Andrew Brunson "remains wrongly imprisoned on false charges" in Turkey.

Brownback introduced the first two of several survivors of persecution scheduled to speak about their personal experience.

Jamie Powell, the wife of pastor John Cao, said he was arrested by Chinese border police after doing "faith-driven work" to help poor people in neighboring Myanmar and has been sentenced to seven years in prison.

"He has lost 50 pounds, he's not been able to communicate with me and my children," said Powell, who lives in the U.S. "My son and I traveled there, 10,000 miles, and we were not allowed to see him."

Tahir Hamut, a Uighur Muslim from China who now lives in the U.S., told of how the Uighur population "is now living in horror," with some sent to "re-education camps" similar to concentration camps.

"There are unprecedented restrictions on the religious lives of Uighurs," he said through a translator. "The government has confiscated and burned religious books and demolished mosques."

Other invitees ranged from Americans representing Southern Baptist, Scientologist, Hindu and Hare Krishna organizations to a delegation of Christian, Muslim and Sikh leaders from the United Arab Emirates. Scheduled speakers include Vice President Mike Pence; Mark Green, administrator of the U.S. Agency for International Development; and Mick Mulvaney, director of the Office of Management and Budget.

Discussions have included expert advice on the U.S. grant-making process that may assist religious and nongovernmental organizations in gaining financial support for their work on religious liberty.

Experts have said the meeting aims to demonstrate how the Trump administration prioritizes religious freedom. But others have questioned if it is primarily an opportunity to appeal to Trump's base of white evangelical supporters, who have long called religious liberty a priority and who overwhelmingly voted for the president in 2016.

Ahead of the meeting, the National Religious Broadcasters, a group whose membership includes prominent evangelicals, welcomed the gathering.

"I am particularly grateful that you have chosen America's first freedom — religious freedom — to be the focus of your first formal ministerial," wrote NRB President Jerry Johnson in a Monday letter to Pompeo. "Religious liberty is a source of strength and stability for societies, and the focus that President Donald Trump and his administration have placed on this core principle sends a powerful message within our nation and to governments abroad."