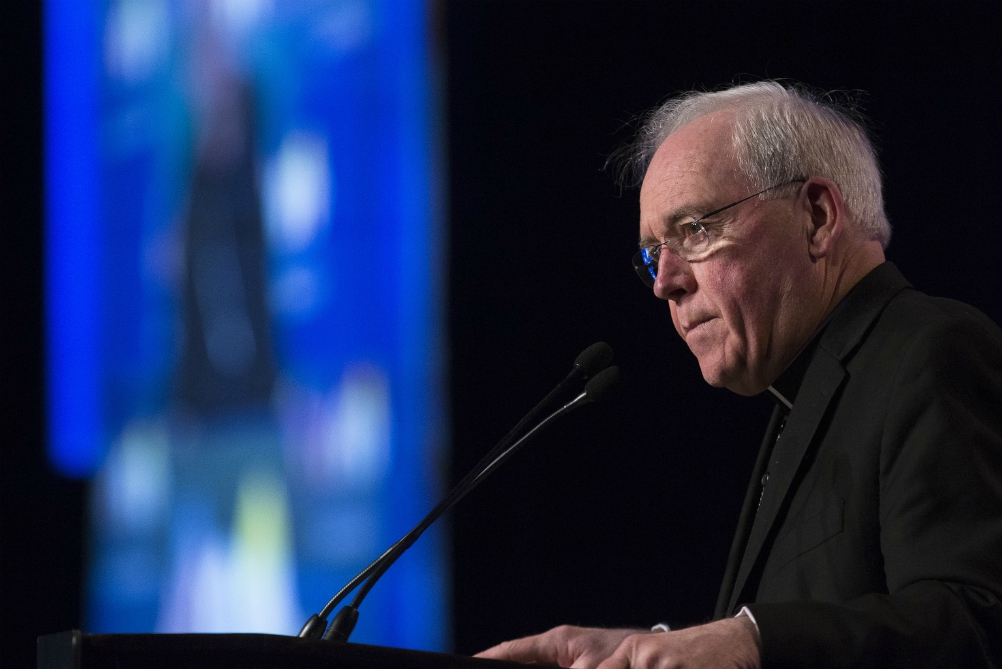 The Movement to Restore Trust, a church reform group with its roots at Canisius College, a Jesuit institution, has come to an agreement with Bishop Richard Malone of Buffalo, New York, on recommendations to address the ongoing sex abuse crisis.

It is the latest development in a series of jarring events that has enveloped the diocese, including calls for Malone to resign, as it attempts to recover from disclosures over the past year.

As the result of a meeting between Malone and the Movement to Restore Trust April 11, the bishop agreed to hold a series of diocesanwide listening sessions to hear directly from sexual abuse victims and others. He promised more meetings with Movement to Restore Trust leaders to discuss how the diocese handles information about abusers, and agreed to expand the diocesan finance council to include more laypeople, particularly women.

Malone also agreed to expand the diocese's ethics reporting service, until now focused on financial issues, to also include accepting reports of sexual abuse or harassment.

The agreement was a response to a series of events in 2018 when Buffalo Catholics learned about a retired priest who admitted to dozens of cases of abusing children previously unreported and when the diocese released the names of 42 priest abusers, a list that later grew to 176.

Via a report on CBS' "60 Minutes," Buffalo Catholics also heard from Malone's former administrative assistant that the diocese was not forthcoming on all it knew about sex abuse cases.

It was, said John Hurley, Canisius College president, a case of "wave after wave of bad stories," which "didn't square with people's understanding and what we had been told by previous bishops."

The goal of the April 11 meeting, according to Maureen Hurley, a leader of the Movement to Restore Trust, was to come to an agreement on less-controversial recommendations that emerged from a series of meetings held earlier this year at Canisius soliciting input from Buffalo Catholics about the crisis in the church.

"We called them easy wins," she said.

The Movement to Restore Trust is led by a nine-member executive committee, representing prominent Buffalo Catholics, including attorneys, corporate heads and benefactors of the diocese. The group solicited recommendations but ruled out calling for Malone's resignation or calling for any reforms that would violate canon law.

"This is just the beginning. But it is a very hopeful beginning," said Canisius' John Hurley April 15 on WBEN Radio in Buffalo. John Hurley, husband of Maureen, praised Malone, stating, "He has reached out and embraced this work. He has committed to the process of reform."

"The MRT is the work of the Holy Spirit," Malone said on that broadcast. He said that the recommendations will reinforce the bonds between the laity and the church hierarchy in the work of the diocese in the way envisioned by the Second Vatican Council.

The recommendations, he said, "will bring the life of the church in Western New York to a stronger place."

But other Catholic leaders in Western New York say that the diocese can only progress once Malone is forced out.

Dennis DePerro, president of St. Bonaventure University, a Franciscan institution in Allegany in the Buffalo Diocese, urged Malone to resign over his handling of clergy sexual abuse allegations.

DePerro released a statement on April 11 stating that Malone "hasn't been transparent enough along the way for Catholics in Western New York to continue to have confidence in his leadership."

Robert Hoatson, the director of Road to Recovery, a group for victims of abuse based in New Jersey, is a regular protester at Buffalo Diocese events and has stated that Malone has refused to take seriously sex abuse concerns.

"The bishop could make these decisions unilaterally. He should have done them a long time ago," he said about the Movement to Restore Trust recommendations. "It's a smokescreen to delay the inevitable."

Hoatson said that Malone's tenure in Buffalo, which began in 2012, has been marked by secrecy over sex abuse issues. That has been broken only by pressure brought to bear by survivors and an ongoing investigation by the New York State attorney general's office, said Hoatson.

The Movement to Restore Trust will continue to meet with Malone, said Maureen Hurley, with the next conference planned for May, at which further recommendations will be on the table.