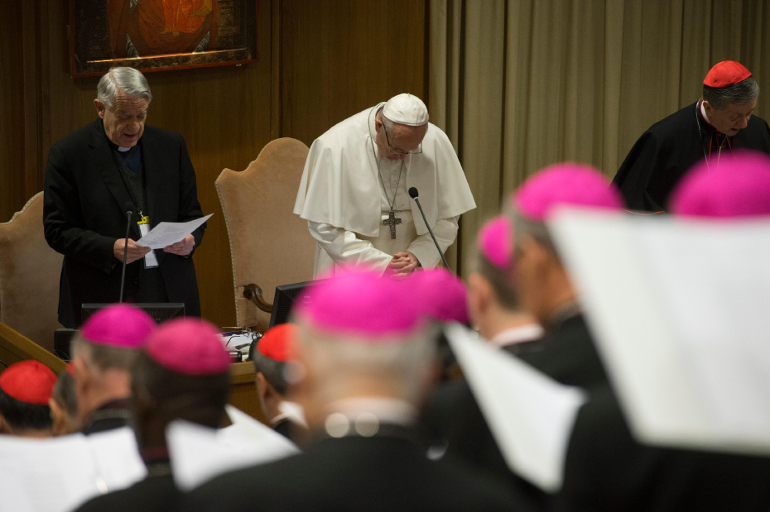 Pope Francis prays Feb. 22, 2019, the second day of the Vatican meeting on the protection of minors. (CNS photo/Vatican Media via Reuters)

A top cardinal has admitted that the global Catholic Church destroyed files to prevent documentation of decades of sexual abuse of children, telling the prelates attending Pope Francis' clergy abuse summit Feb. 23 that such maladministration led "in no small measure" to more children being harmed.

In a frank speech to the 190 cardinals, bishops and heads of religious orders taking part in the four-day summit, German Cardinal Reinhard Marx said the church's administration had left victims' rights "trampled underfoot" and "made it impossible" for the worldwide institution to fulfill its mission.

"Files that could have documented the terrible deeds and named those responsible were destroyed, or not even created," said Marx, beginning a list of a number of practices that survivors have documented for years but church officials have long kept under secret.

"Instead of the perpetrators, the victims were regulated and silence imposed on them," the cardinal continued. "The stipulated procedures and processes for the prosecution of offences were deliberately not complied with, but instead cancelled or overridden."

"These are all events that sharply contradict what the Church should stand for," said Marx, the archbishop of Munich and Freising, head of the German bishops' conference, and a member of Francis' advisory Council of Cardinals.

Marx spoke to the prelates Feb. 23 after Nigerian Holy Child Jesus Sr. Veronica Openibo, who eloquently blasted what she called a culture of "mediocrity, hypocrisy, and complacency" that she said had brought the church to a "disgraceful and scandalous place."

In a moving oration that may draw parallels to Franciscan Sr. Thea Bowman's speech to the U.S. bishops in 1989, Openibo criticized priests who supported accused brethren over victims, expressed serious concerns about current formation practices and even addressed Francis' own record on abuse.

Turning directly to the pontiff as he sat one chair over on the rostrum in the Vatican's Synod Hall at the end of her speech, Openibo called him "Brother Francis" and said she admired him for being "humble enough to change your mind, to apologize and take action" about sexual abuse in Chile.

Read this next: At abuse summit, Sr. Veronica Openibo calls for complete transparency

The third day of the summit has been focused of the theme of transparency. Each day of the event begins with a prayer service and includes three presentations and then time for working in small language groups.

Marx's admission to the church's destruction of files may have special significance in his native Germany, where an exhaustive September 2018 report on abuse in the country detailed cases involving 3,677 children but said files in at least two dioceses had been changed or destroyed.

Francis was criticized during his 2018 visit to Chile for defending a bishop accused of knowing about abuse by a priest. The pope has since apologized in a public letter to the people of the country and has accepted the resignations of several Chilean bishops accused of abuse or cover-up. 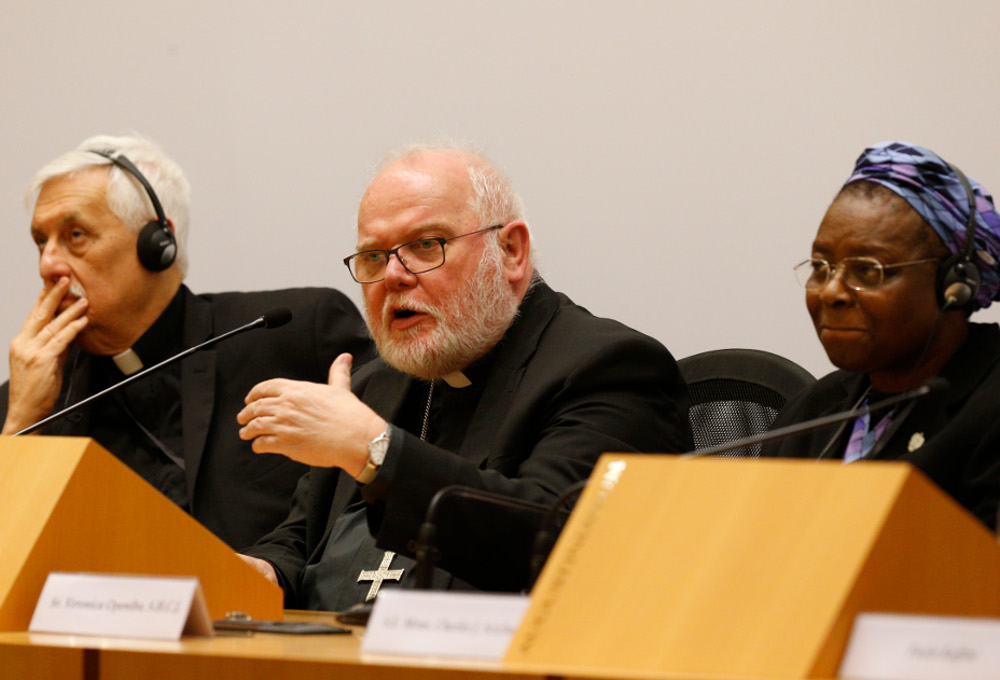 Cardinal Reinhard Marx of Munich speaks at a briefing on the third day of the meeting on the protection of minors Feb. 23 at the Vatican. Also pictured are Fr. Arturo Sosa Abascal, superior general of the Society of Jesus, and Nigerian Sr. Veronica Openibo, congregational leader of the Society of the Holy Child Jesus. (CNS/Paul Haring)

Marx focused his half-hour talk Feb. 23 on the need for better administration by bishops in the church. He stressed the need for transparency, but also "traceability," so as to allow victims and Catholics to follow abuse cases as they develop.

The cardinal said that management in the church "should take place in such a way that people feel accepted in administrative procedures, that they feel appreciated [and] that they can trust the system."

He said the importance of such management could be seen in the negative experience suffered by many abuse survivors, which he summarized as: "If the church claims to act in the name of Jesus, yet I am treated so badly by the church or its administration, then I would also like to have nothing to do with this Jesus."

Marx also condemned the use of pontifical secret, or confidentiality, in abuse cases.

"Pontifical secrecy would only be relevant if compelling reasons could be shown ... As things stand, I know of no such reasons," said the cardinal.

Openibo, who leads her order and is also a member of the executive board of the Rome-based umbrella group International Union of Superiors General, focused on how the church had failed to be open about the various ways it had done wrong in abuse cases.

The sister said that the church must live "visibly and perceptibly what we claim to be."

"We proclaim the Ten Commandments and 'parade ourselves' as being the custodians of moral standards and values and good behavior in society," said Openibo.

"Hypocrites at times?" she asked. "Yes! Why did we keep silent for so long?" she asked, letting that question hang in the air.

Openibo said she had heard some fellow Africans and Asians say that clergy sexual abuse is not an issue for the church in their countries but only for "Europe, the Americas, Canada and Australia."

"I worked throughout Nigeria in the area of sexuality education for nine years and heard the stories and counseled many people," she said, before recounting several of her experiences.

On issues of formation, Openibo said it "worries" her "when I see in Rome and elsewhere the younger seminarians being treated as though they are more special than everyone else."

"What damage has that thinking done to the mission of the church?" she asked. "Have we forgotten the reminder by Vatican II in Gaudium et Spes of the universal call to holiness?"

Continuing, Openibo also said the church must "ask responsible and sensitive lay people and women religious to give true and honest evaluation of candidates for episcopal appointments."

Openibo is one of 10 sisters invited to the abuse summit. She thanked the pope during her speech for inviting them and mentioned that at synod gatherings normally only three women religious are invited.

Later Feb. 23, Francis and the bishops at the event took part in a penitential liturgy in the Vatican's apostolic palace that included an unscheduled testimony from an abuse survivor, who also played violin for the prelates.

The survivor said he thinks of his life in two parts: before and after his abuse. "I wish the perpetrators could understand that they create this split in the victim," he said, adding: "For the rest of their lives."

Ghanaian Archbishop Philip Naameh gave a short homily during the liturgy, focused on Luke's account of the parable of the prodigal son. Naameh said that like one son in the story the bishops had "squandered the trust placed in us."

The bishop told his colleagues that the summit was "only one step of many" that faces them. He said they must go home and "win over our brothers and sisters … regain their trust, and reestablish their willingness to cooperate with us."

As Marx was speaking Feb. 23, dozens of abuse survivors gathered at Rome's Piazza del Popolo for a mile-long march to Castel Sant'Angelo. As they walked, many of the participants carried signs and chanted "No Tolerance," referencing their call that the summit put in place strict zero tolerance measures against abusers.

Peter Isely, a survivor with the Ending Clergy Abuse group, referenced Marx's admission regarding destruction of files at a rally at the end of the march, saying that if the cardinal knows bishops who destroyed documents that he should report them to civil authorities.

At a press briefing after his address Feb. 23, Marx clarified that he was referring in his speech to the September 2018 German report on the destruction of files. "I have absolutely no information as to other cases," said the cardinal.

This story appears in the Vatican Abuse Summit feature series. View the full series.
A version of this story appeared in the March 8-21, 2019 print issue under the headline: Francis ends summit with promise to ‘decisively confront’ abuse.