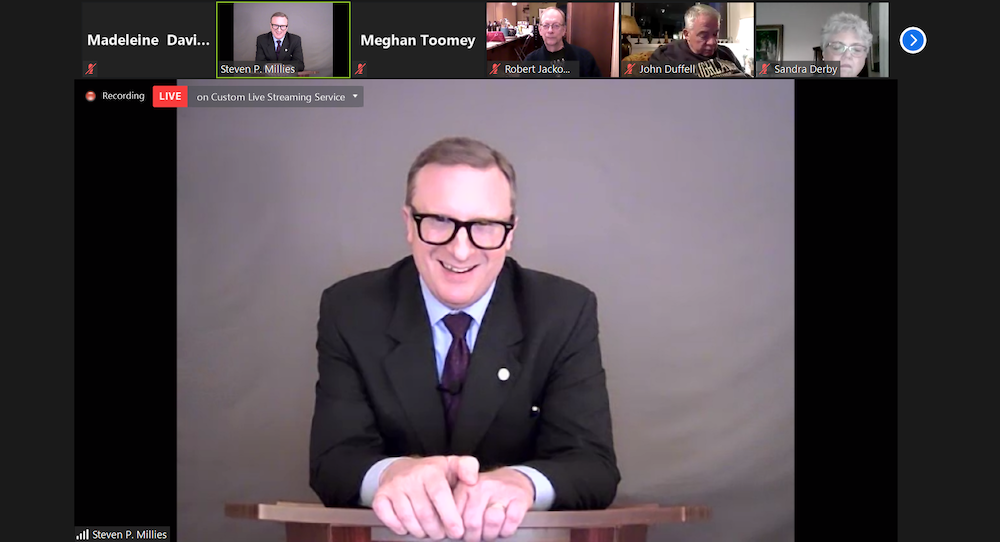 "Our capacity to address every other problem — like COVID 19 — has been compromised by the politicization of everything in the name of overturning Roe," Millies said. "And stop and ask yourselves this — imagine once Roe is overturned. Do you expect it all just to stop? I don't think it will."

In 2018, Millies, director of the Bernardin Center at the Catholic Theological Union in Chicago, published the book Good Intentions. In it, he examined why so many Catholics voted for Donald Trump in the 2016 presidential election (Trump won a majority of the white Catholic vote in 2016.)

In the book, Millies implored Catholics to see the potential for good in the 1973 Roe v. Wade Supreme Court decision that established the right to legal abortion within certain limits.

"Perhaps the Roe decision, while not entirely good, is not entirely evil either," Millies said, quoting from his book.

Perhaps Catholics who view abortion as a grave moral wrong — as Millies does — could see Roe as a sign that women's rights are being taken more seriously in American politics and as a chance to find common ground with people who support legalized abortion, he said.

People who actually promote abortion per se are rare, Millies said. Most people who support abortion rights do so because they want women to have the same control over their lives that men have always had.

Millies said U.S. Catholics face the paradox that just as Catholics are at the height of their social, cultural and political power, the church itself is "in retreat." Mass attendance has plummeted over the past 5 decades at the same time that the Supreme Court has just added a sixth Catholic justice to its nine-person bench.

Meanwhile, Catholic leaders, and even non-Catholic politicians, have used accusations of "anti-Catholic bias" as "weapons deployed in the culture war," Millies said, which has created a "partisan division in our church about how to be Catholic out in public."

Some candidates have lobbed accusations that their opponents are "Catholics in name only," Millies said, while some conservative Catholics accuse their liberal counterparts of not being "real Catholics."

Millies attributed the rise of this partisan division to the Second Vatican Council's good intentions of encouraging laypeople to embrace social and political life.

Unfortunately, he argued, the unintended consequence of this positive development led church leaders to start acting like an interest group, pressuring politicians and lobbying for policies. The bishop's conference, reanimated in the 1970s after Vatican II, was poised to attack Roe as soon as the decision landed in 1973.

"Even today, we Catholics in the pews are not really encouraged, each of us, to behave like a leaven or like an individual light of the world," Millies said. "Instead, we get instructions in homilies or in 'Faithful Citizenship' statements: Abortion is the 'pre-eminent priority.' "

Pope St. John Paul II's use of "us-versus-them" rhetoric and the language of war when describing Catholic engagement with culture only intensified the hierarchy's attack on abortion, and with it, the political polarization of American Catholics, Millies argued. John Paul tended to see the world in "zero-sum terms," he said, and the U.S. bishops followed suit.

By the early 2000s, despite the fact that Catholics are almost evenly split in terms of political party, a dominant narrative emerged where "good Catholics" had to focus on abortion politics and other culture war issues, he said.

In reality, Millies argued, the church is extremely diverse — racially, ethnically, economically. Catholics are roughly split by party, and Catholics of each party have similar views to most of their non-Catholic counterparts, he said.

Ignoring this diversity, Catholics have helped foment political divisiveness, Millies said, by acting as if the church is a lobbying group.

"It bears saying loud and clear — Catholicism is not a political interest," Millies said. "Catholicism certainly means that Catholics must be interested in social and political questions."

But if achieving political results becomes the measure of their faith, Catholics have left behind the original message of social engagement. Furthermore, none of this politicking has prevented a single abortion, Millies said.

"It bears saying loud and clear — Catholicism is not a political interest."
—Steven P. Millies

And the fight to overturn Roe has damaged U.S. political institutions and kept Catholics from addressing other pressing social issues — such as the pandemic and the rise of ethno-nationalism worldwide, he said.

Millies offered four suggestions to Catholics seeking to fight political division, to become "a leaven and … a kind of soul for human society," and to " 'preach the Gospel at all times,' using words only 'when necessary.' "

He argued that Catholics should be practical about politics — understand the issues and mechanisms of government. Presidents don't stop abortions, he said, but they do a lot of other important things.

"As Catholics, we do not belong to the Republican Party or the Democratic Party. We belong to the Samaritan Party," he said, referring to the biblical story of the Good Samaritan.

He said after the election, Catholics must dedicate themselves to working toward the common good.

"I think abortion is ready to come off the front burner," he said, adding that abortion policy is much less federalized than it once was and that many abortions are now conducted via pharmaceuticals.

"Now, that won't prevent people from fundraising on it or exploiting it," he added.

In response to an audience question, Millies said he thinks the U.S. bishops' inability to produce a new "Faithful Citizenship" document for the 2020 election shows that they are beginning to recognize that many lay Catholics are beginning to move away from abortion as the only pre-eminent issue.

"There is no one so foreign, no one so unlike me, no one whose ideas are so distasteful to me that I should not ask, 'What else do they need from us that we are not offering them?' " Millies said. "There is no stranger on the side of the road I shouldn't stop for. There is no relationship we must not tend to."