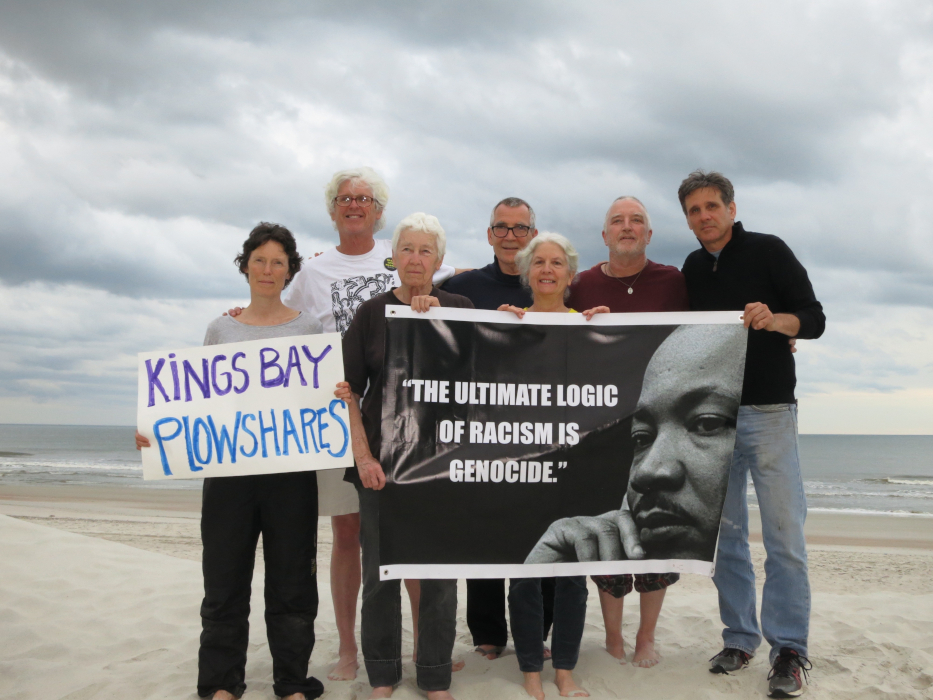 Seven Catholics who call themselves the Kings Bay Plowshares are seen April 4, 2018, before they entered the Naval Submarine Base Kings Bay in Georgia to protest nuclear weapons. On Oct. 15, Rev. Stephen M. Kelly (center, wearing glasses) a 71-year-old Jesuit priest, was sentenced to 33 months in jail, three years' probation and restitution fees after he and others infiltrated a nuclear submarine base as part of a nuclear disarmament action. (CNS/Kings Bay Plowshares)

Since his arrest nearly three years ago on trespassing charges after invading a nuclear submarine base with six others as part of a symbolic nuclear disarmament action, the Rev. Stephen M. Kelly has been held in a Brunswick, Georgia, county jail.

On Oct. 15, Kelly, a 71-year-old Jesuit priest, considered the leader of the group that came to be known as the Kings Bay Plowshares 7, was sentenced by a U.S. District Court judge to 33 months in jail, three years' probation and restitution fees.

Because Kelly has already served 30 months and under federal law is owed 54 days a year of "good time credit," he could essentially walk out of jail tomorrow.

"Father Kelly, it has been clear to me you are sincere in your beliefs," said Judge Lisa Godbey Wood. "However, I would be remiss to discount the nature of the offense that we're looking at today and the risk to safety that you knowingly undertook."

Kelly described himself in a pre-sentence statement as a "prisoner of conscience for Christ," and one who preaches against "the sin that flourishes in weapons of mass destruction."

He is part of a group of Catholic pacifists who quietly and with little fanfare continue to undertake nonviolent action protesting nuclear weapons, which they say will lead to omnicide, or the destruction of the human race.

Related: What would Jesus wear to celebrate Mass at the end of the world?

The group's members say that they take their cues from Catholic teachings and the Bible, particularly the saying of the Prophet Isaiah: "They shall beat their swords into plowshares, and their spears into pruning hooks: nation shall not lift up sword against nation, neither shall they learn war any more."

Kelly and his collaborators believe their action was intended to prevent nuclear war. The only ordained member of the Kings Bay Plowshares 7, Kelly said he was not concerned with the effectiveness of his protest, but rather with being faithful to his Christian calling.

"I answer to a higher authority in that my faith imperative, as outlined in the tenets of the Catechism, missions me to respond to the needs of the poor, oppressed, disenfranchised, in any locality and without any exclusion to those with felony record," Kelly wrote in his statement to the judge.

Kelly, who is a member of the Jesuits' Western U.S. region, based in Oregon, has spent at least a decade behind bars, including six years in solitary confinement. He has refused to work during his confinement because in so doing he would support what he has called the prison industrial complex.

It remains to be seen whether Kelly will agree to probation or restitution as ordered by the court. He has indicated he will not. 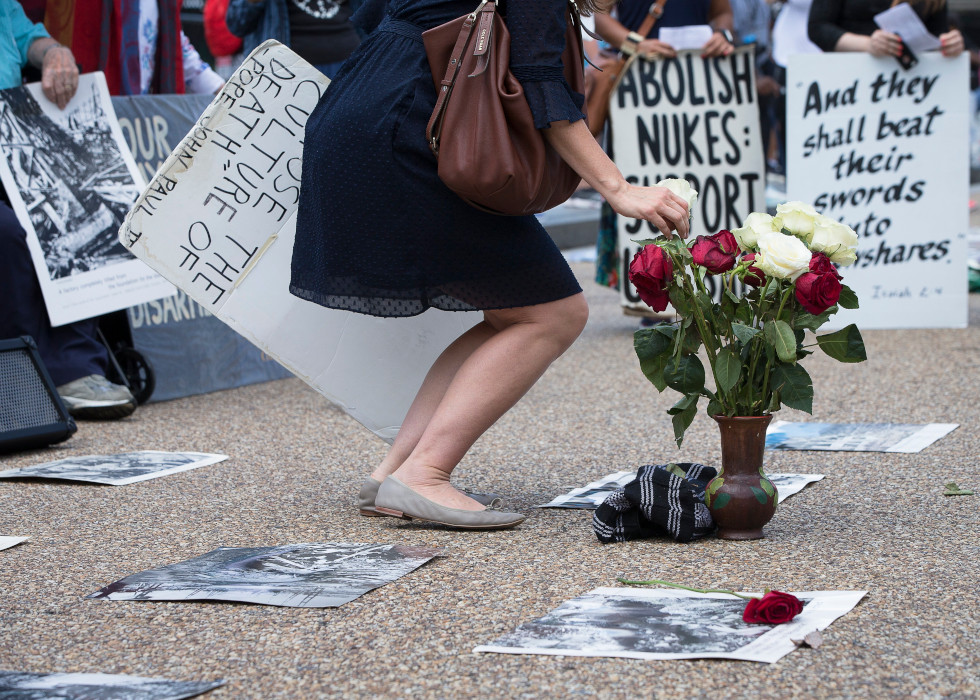 In this 2018 file photo, peace activists hold a Catholic prayer service of repentance near the White House for the use of nuclear weapons on Japan during World War II. Kelly is considered the leader of the Kings Bay Plowshares 7, a group that takes cues from the saying of the Prophet Isaiah: "They shall beat their swords into plowshares, and their spears into pruning hooks: nation shall not lift up sword against nation, neither shall they learn war any more." (CNS/Tyler Orsburn)

"He's a fearless person," said Patrick O'Neill, one of the Kings Bay Plowshares 7. "He's not burdened by the normal self-constraints of most of us. He's very driven in his effort to save the world from its own hand."

On the night of April 4, 2018, the Kings Bay Plowshares 7 cut a padlock and later a security fence at Kings Bay Naval Base in Georgia, which houses six Trident submarines carrying hundreds of nuclear weapons. The intruders spilled blood on a Navy wall insignia, spray-painted an anti-war slogan on a walkway and banged on a monument to nuclear warfare.

More than an hour into their action they were apprehended and taken to jail. While four of the seven were released on bail, three refused the terms of the bail and remained in jail — none for as long as Kelly.

Last year, all seven were convicted of destruction of property on a naval installation, depredation of government property, trespass and conspiracy.

With the exception of Elizabeth McAlister, who was sentenced in June to time served, none of the other Plowshares activists has been sentenced, largely due to the coronavirus pandemic. Four of the seven have asked to postpone the sentencing because of a surge of COVID-19 sweeping through prisons across the U.S. O'Neill, another member of Plowshares 7, will be sentenced on Friday.

The Rev. Scott Santarosa, the provincial in charge of Jesuits West, said Kelly was commissioned to a peace and justice ministry.

"He's really a wonderful guy," Santarosa said. "I have great personal respect and affection for him."

The two have communicated through postcards during the time Kelly was in jail.

His friend Dennis Apel, a Catholic worker who runs Beatitude House in Guadalupe, California, and who served as a character witness at the sentencing Thursday, said that upon Kelly's release, he expected that the priest would go on an eight-day meditation retreat based on the spiritual practices of Ignatius of Loyola, founder of the Jesuit order.