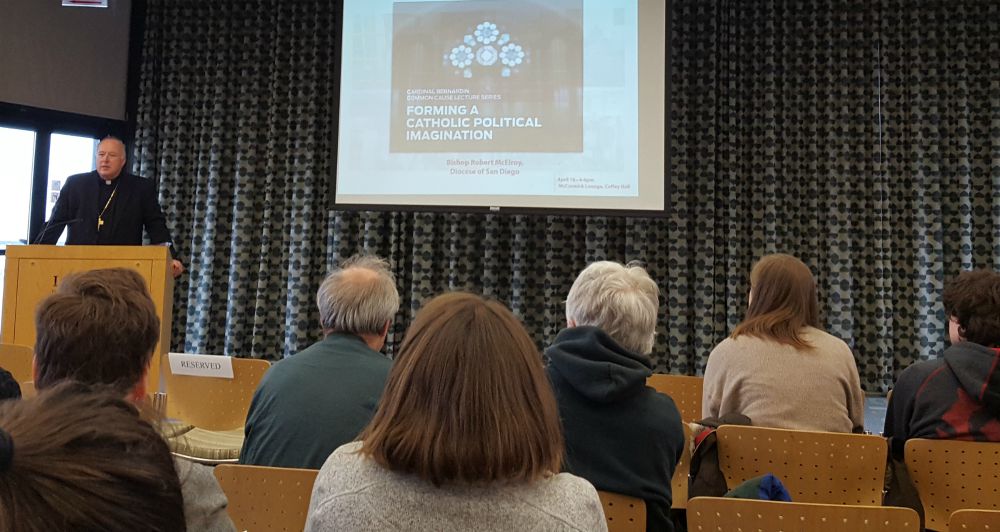 The current polarization in the United States is the result of a "profound sickness of the soul," which is best addressed not politically but morally, through the cultivation of the virtues of a Catholic imagination, said San Diego Bishop Robert McElroy.

"This sickness tears at the fabric of our nation's unity, undermining the core democratic consensus that is the foundation for our identity as Americans," he told a crowd gathered April 18 for the "Cardinal Bernardin Common Cause Lecture" sponsored by the Hank Center for the Catholic Intellectual Heritage at Loyola University here.

Such divisiveness requires witnesses who can evangelize the political culture, he said, by modeling virtues such as solidarity, compassion, integrity, hope, dialogue, encounter and peacemaking.

McElroy called the current polarization "heartbreaking," contrasting it to Pope Francis' "beautiful vision of politics" in his 2015 address to Congress. "Party" has become shorthand for worldview, he said, and party identity leads to a "cafeteria Catholicism" that too often does not foster the common good.

As evidence of the bitter partisan divide, he cited a survey that said 40 percent of Americans today would be upset if their child married someone from the other political party — compared to only 5 percent feeling that way in 1960.

Another example is how the church's pro-life positions on the unborn as well as the poor and refugees are placed in political opposition in which both sides present "skewed distillations of Catholic moral teaching," he said.

"Catholic teaching has been hijacked by those who break down the breadth of our social doctrine by reducing it to the warped partisan categories of our age and then selecting those teachings for acceptance which promote their partisan worldview," he said.

What is needed instead, he argued, is "evangelization of the heart and soul and spirit of Americans to help them grow in the fundamental virtues which can orient their choices toward the common good."

This "deep-level conscience formation" has been modeled by Francis, McElroy said, quoting both the pope's address to Congress and his new apostolic exhortation on holiness, Gaudete in Exsultate.

McElroy also referred to Chicago Cardinal Blase Cupich's call for a "consistent ethic of solidarity," which Cupich presented in the first "Cardinal Bernardin Common Cause Lecture" at Loyola last year.

"Catholic teaching has been hijacked by those who break down the breadth of our social doctrine by reducing it to the warped partisan categories of our age and then selecting those teachings for acceptance which promote their partisan worldview."
—Bishop Robert McElroy 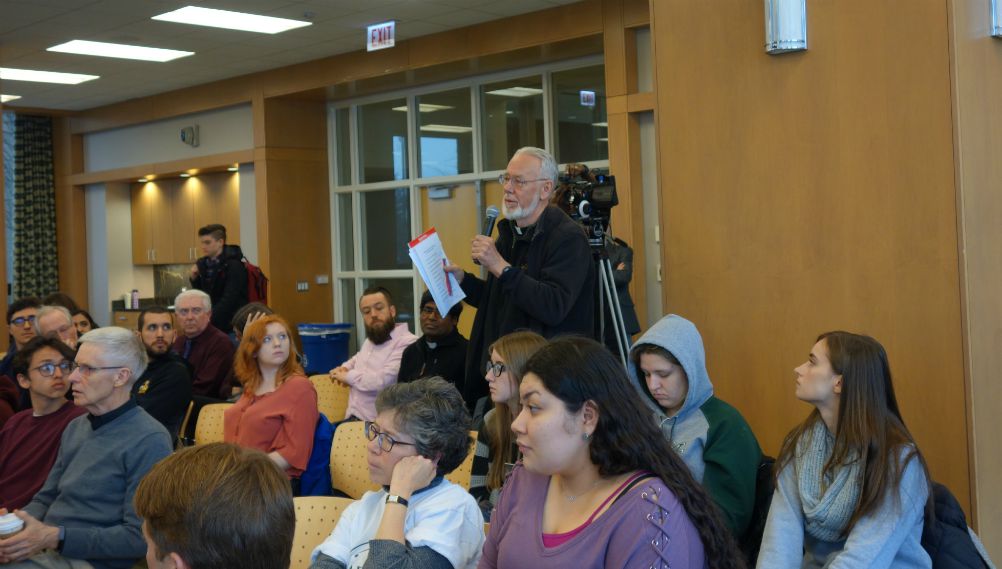 The lecture series is named after Cardinal Joseph Bernardin, the late cardinal of Chicago who sought to address social issues through a "seamless garment" or "consistent ethic of life" approach and to decrease polarization in the church through his Catholic Common Ground Initiative.

In addition to solidarity, McElroy argued that compassion is a foundational virtue in the Catholic imagination, but it can't be the hard-hearted "compartmentalized compassion" reserved only for certain groups of people.

"In our overly politicized culture, we have permitted the core unity of human compassion to become fragmented into separate partisan categories, and even worse, we have allowed our own sense of the moral imperatives which flow from true Christian compassion to be distorted by a partisan lens," he said.

Christian compassion must extend to all who are suffering, whether Black Lives Matter activists or economically dispossessed whites who voted for President Donald Trump, both of whom are "signs of woundedness in our nation," he said.

"The central challenge is whether we can meet our woundedness with care and action which are not filtered through a partisan lens," he said.

Also needed is integrity that counters the hypocrisy of excusing behavior of political allies when that same behavior is condemned in political opponents. Fierce partisan political battles, while exciting and newsworthy, exact a tremendous cost to the nation, McElroy said.

"And there is a wider corrosion to our individual soul and spirit that such fierce partisanship and animosities produce," he said.

Rather than accept this reality as the "new normal," Catholics need to dream and hope for a more peace-filled culture, which will only come from encounter and dialogue, he said. Sadly, he noted, these are lacking both in the culture and the church.

"Dialogue, encounter and unity is more important than any single policy issue we face today, because such a stance of encounter and dialogue is itself the foundation for any genuine pursuit of the common good," he said.

In the question-and-answer following McElroy's talk, several audience members countered about the importance of action and working for justice. McElroy agreed, but noted that "dispositions of our hearts and souls" are a prerequisite for action and justice.

Likewise, his response to a question about whether the two-party system offers adequate options for Catholic voters, McElroy reiterated that the virtues of the Catholic imagination must precede any electoral decision.

Noting that nearly every election since he cast his first vote in 1972 has offered less-than-perfect candidates, he added, "But if we start with the choice between Clinton and Trump, then we've already lost."

Instead, the first question should be, "What type of Christian should we be developing to make the world a better place?"

Related: Bishop McElroy: Politics should pursue common good, not special interests
A version of this story appeared in the May 4-17, 2018 print issue under the headline: Catholic virtues necessary to address political polarization, bishop says.