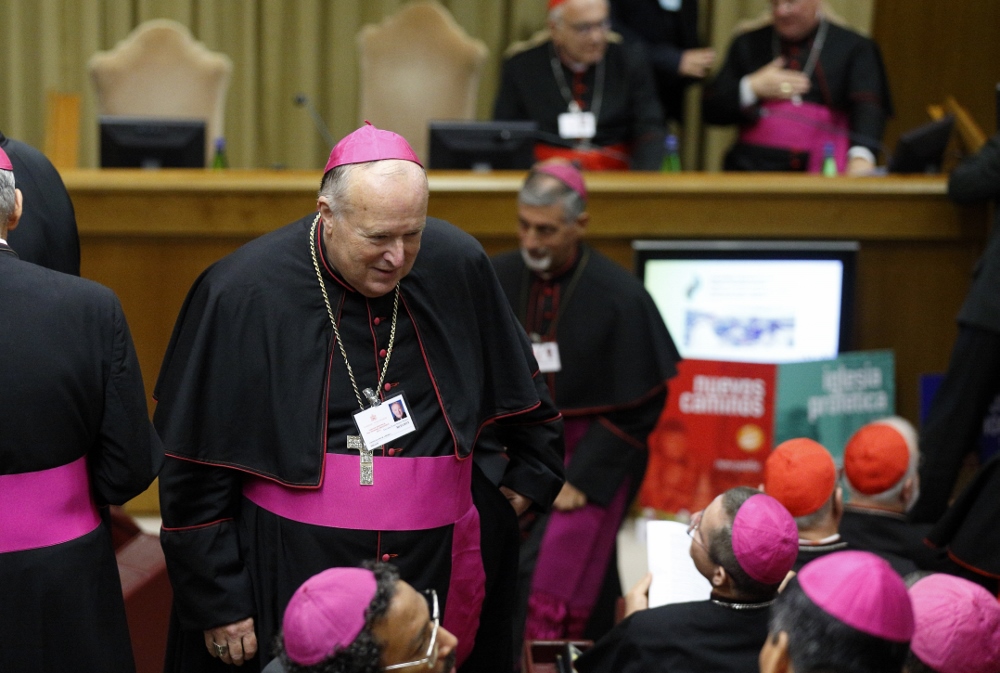 Bishop Robert McElroy of San Diego arrives for the first session of the Synod of Bishops for the Amazon at the Vatican Oct. 7. (CNS/Paul Haring)

San Diego Bishop Robert McElroy said he supports allowing women to serve as deacons in the Catholic Church, in what appears as the first such public disclosure of a U.S. prelate since Pope Francis reopened consideration of the history of women's diaconal ordination in 2016.

In an NCR interview Oct. 27, McElroy said he hoped the pope's surprise decision at the end of the Synod of Bishops for the Amazon to reconvene the Vatican's study commission on women deacons would lead to "a conclusion that it is not prohibited to ordain women to the diaconate."

Asked if he personally had developed an opinion on whether women could be ordained as deacons, the bishop replied: "I'm in favor of it."

"My view on it is [that] women should be invited into every ministry or activity we have that's not doctrinally precluded," said McElroy.

McElroy, one of three U.S. bishops to participate in the Oct. 6-27 Amazon synod, was speaking in a 40-minute interview just hours after Francis formally concluded the event with a Mass in St. Peter's Basilica.

Women deacons emerged as a key topic during the monthlong synod, with many of the gathering's 185 male voting members speaking publicly about a desire to more formally recognize women's ministries across the nine-nation Amazon region.

Shortly after the synod members approved a final document that said the idea of ordaining women as deacons had been "very present" during their discussions, Francis announced he would be summoning his commission on the issue back to work, and adding new members to its ranks.

Although some U.S. bishops have publicly supported the work of the papal commission — Chicago Cardinal Blase Cupich notably issued a statement after its formal institution in August 2016 — they have generally steered clear as a group from expressing opinions on the possibility of women being ordained in the future.

In his NCR interview, McElroy also spoke about a proposal in the synod's final document that the pope create a new ministerial role for women to recognize their leadership capabilities called the "woman leader of the community." 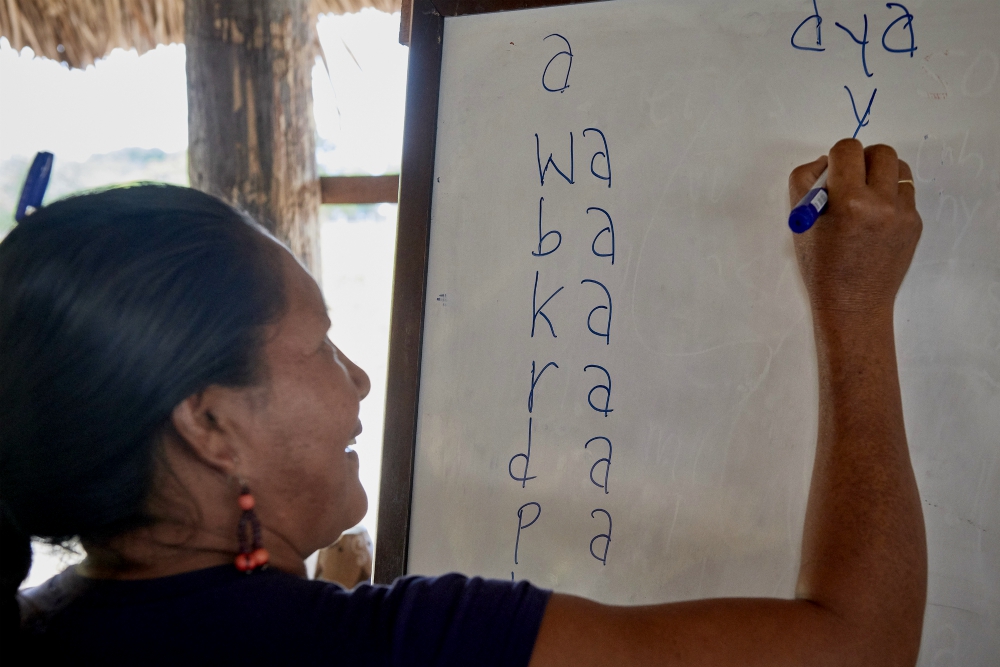 A woman writes on a white board during a workshop in St. Ignatius, Guyana. The workshop was designed to help laypeople improve their reading of the Sunday Scriptures in their own languages, so they can better lead liturgies in their indigenous communities. (CNS/Paul Jeffrey)

The San Diego bishop said that proposal sprang out of a desire to acknowledge the duties Catholic women are already taking up across the Amazon. He said one woman religious at the gathering had told the bishops that she celebrates baptisms, witnesses marriages and presides over liturgies of the word.

"Several of us from outside the region were stunned," said McElroy. "I don't think there are too many places in the U.S. where women are doing all those things."

The prelate said the idea for the new ministry was to recognize such women as full Catholic leaders.

"It means governance in the community," said the bishop. "It does mean that. Now, it doesn't mean it in the juridical sense of a parish and canon law ... but it means, for all intents and purposes, the leader of the Catholic community as an institution in that place is whatever her name is."

"It means 'in charge' in a way that our canon law doesn't allow for a parish for a woman," he said.

Francis created the study commission on women deacons in following a request from the Rome-based umbrella group representing the world's Catholic sisters and nuns, formally known as the International Union of Superiors General.

The pope gave a report from the commission back to the umbrella group in May. Although the report has not been released publicly, Francis said the group had originally come to a split decision about the role women deacons played in earlier centuries of the church.

The Amazon synod focused on two overarching sets of priorities: how to respond to the pastoral needs of Catholics in the rural, hard-to-traverse region, and the serious environmental threats facing both the Amazon Basin and the people who have protected and called it home for centuries. 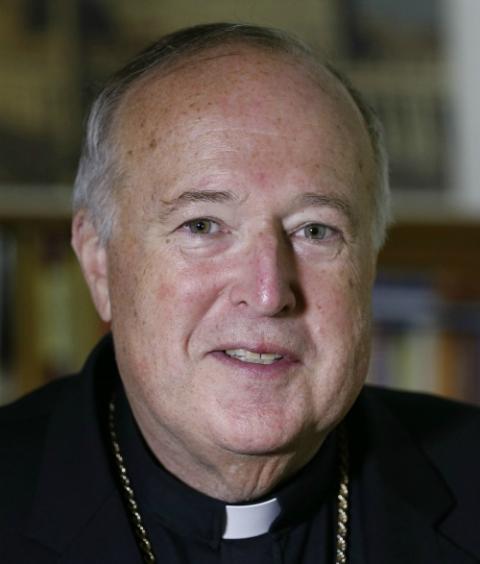 McElroy, whom Francis personally named as a member of the synod, said that it was his experience that the first set of priorities appeared to get more attention in the event's discussions.

He pointed to the exhaustive, 18-month preparation period for the synod, which involved the hosting of nearly 300 local, national and regional assemblies.

After that lengthy process, McElroy said, the bishops were ready to ask questions like: "What methods of evangelization will work here in these places where we work? And how can we look beyond the ways we've always done things to think of new and creative ways of making the Gospel alive for the people we serve and for the next generation?"

"That was the largest question, in my view," said the bishop. "That's the one that got the most attention."

One of the recommendations the synod made to the pope in its final document was to allow for the priestly ordination of married men on a regional basis in order to address a lack of ministers across the region.

The bishops suggested that current married permanent deacons be allowed to be ordained as priests, in order to "sustain the life of the Christian community through the preaching of the Word and the celebration of the Sacraments in the most remote areas of the Amazon region."

Although McElroy said he thought the synod's recommendation on the issue had been constructed in a limited matter to an address a pastoral emergency in one region of the world, he did acknowledge that bishops in other regions might also now make similar requests. 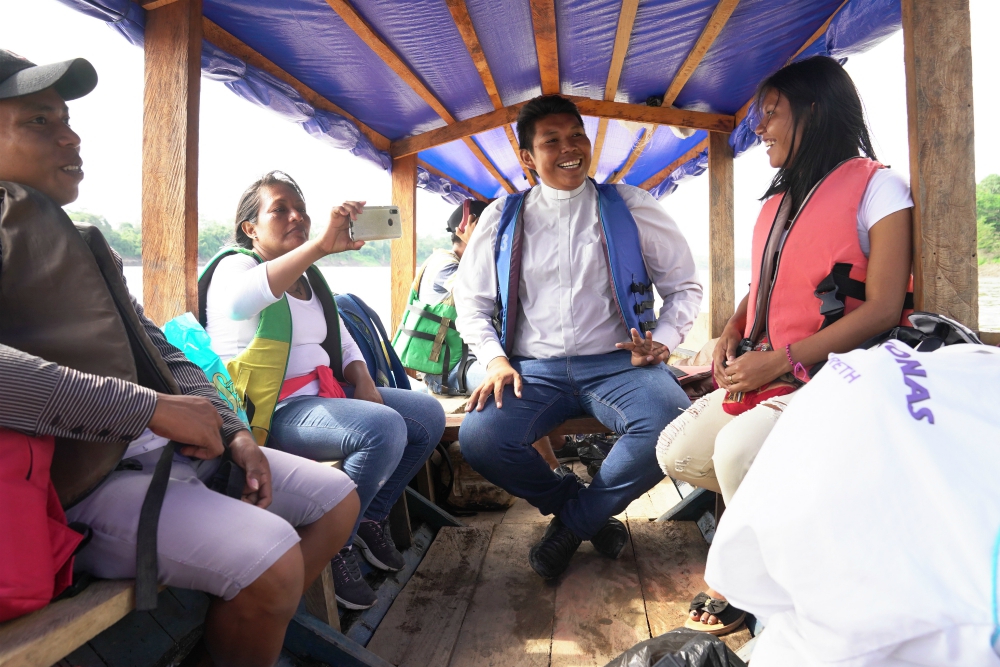 Deacon Ferney Pereira and members of his Colombian parish take a boat on a river in the Amazon Sept. 8. (CNS/Manuel Rueda)

Referencing the fact that the church allows for a married clergy in some Eastern rites or for priests from other denominations who become Catholic, McElroy said there are "many different areas in the life of the church in which there are married priests in the Catholic Church."

"At the same time, each of those is a narrow universe in some ways," he said. "If there were other narrow universes, it wouldn't surprise me if some conferences might ask, but this seems to me a very urgent and pressing [need]."

McElroy said that one issue many Amazon bishops spoke about is the possible difficulty of preparing formation programs for married deacons who would wish to become priests.

"These are people with families and jobs," said the bishop. "You can't just call them out. When you're educating seminarians, you say, 'You go here; you take these courses.' You can't do that to these people. That's a big challenge."

"That is not going to transform either the priesthood or the eucharistic capabilities in a massive way in the Amazon," said McElroy of the synod's recommendation on married priests.

The Amazon synod was McElroy's first. Looking back at the three weeks of discussions, the San Diego bishop said he was struck by the sense of unity among the region's prelates about the common set of issues they face.

McElroy mentioned that the dais in the Vatican's synod hall was decorated each day with images of Latin American saints and martyrs, such as Salvadoran Archbishop Óscar Romero.

"It kept coming up," said the bishop. "It was clearly in their minds that they are still a church of the martyrs."

"There's a real sense that in the church, not only in the recent past but also in the present, there are people in their parish communities, in their communities of faith, who are put to death because they're standing up for justice and for the Gospel," he said.

McElroy said that several bishops used their speeches during the synod's general sessions to mention people they knew who had been martyred, calling that particularly moving.

Although the Amazon synod began with one of the most inclusive and transparent preparation periods yet conducted in the 50-year history of Catholic synods, the discussions in the hall were kept behind closed doors, with no livestream or even release of the texts of the bishops' speeches.

Vatican officials said the secrecy of the synod process was necessary to ensure that the 185 voting members could speak freely, and undergo a true discernment about the needs of the church in the Amazon today.

McElroy, who in addition to his doctorate in theology has a doctorate in political science, said he did not know if synod discussion "necessarily" needed to be kept behind closed doors. "Either way you go, there's a downside to it," he said. 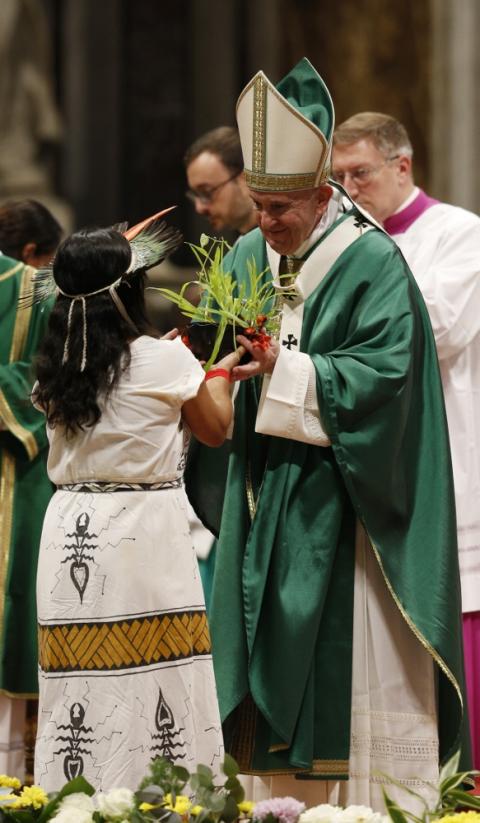 Pope Francis accepts a plant during the offertory as he celebrates the concluding Mass of the Synod of Bishops for the Amazon at the Vatican Oct. 27. (CNS/Paul Haring)

"There is a great desire here not to have the process be driven by the outside groups, channeling in during the discussions," he said. "Whether that's too much, I don't know."

Referring to the importance of the synod preparation process, McElroy said, "My feeling was the groundwork had already been laid so thoroughly coming into it."

"There were very strong sentiments about all the major proposals that emerged," he said. "There were some new creative things that came up ... but I just feel the grassroots process was pretty determinative coming into it."

McElroy suggested that one issue that might be considered in the future is how regional synods, like the one held for the Amazon, should deal with local issues that might also impact the universal church.

"Whatever the reality of that is has to be deepened," he said. "One of the questions would be: What do you do with universal questions that come up as particular local concerns? How does a regional synod make decisions wisely and come to recommendations that are not going to preempt the other churches?"

"That's one part I don't understand, how that will fit together," said the bishop. "It wasn't such a big problem here, but there are hints of that, that could occur."

McElroy also said he would like to see more discussion about women being made full voting members in future synods.

Although 33 women attended the synod, they did so as auditors and experts, who do not have a right to vote on the final document.

"The major superiors of men elect representatives and it strikes me it would be possible to have the superiors of women do such a thing," said the bishop.