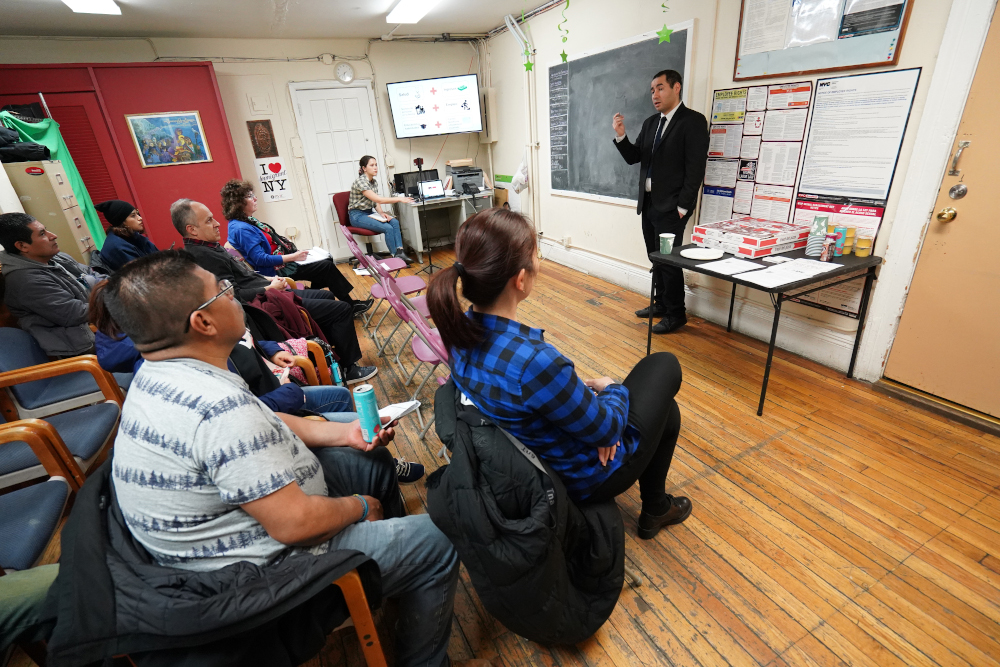 Oscar Montes, staff attorney at Cabrini Immigrant Services of New York City, speaks about the Trump administration's expanded "public charge" policy and its potential impact on immigrants during a presentation at the agency's headquarters Feb. 13, 2020. (CNS/Gregory A. Shemitz)

Widespread confusion about a recent change to the so-called "public charge" law that limits immigrants' use of government benefit programs will have a chilling effect on people, including those who are not covered by the ruling, according to staff at Cabrini Immigrant Services of NYC.

"It's a bad rule, like a bad immigrant version of the old telephone game," Oscar Montes said. "Information filters down and people are getting scared about things that don't affect them."

Montes is immigration staff attorney for Cabrini Immigrant Services. He led a Feb. 13 workshop about the change at the organization's basement headquarters in a building behind St. Teresa's Church on New York's Lower East Side.

The public charge test has been a feature of U.S. immigration law since 1882, when it was first used to deny admission to the country to people who might depend on the government as their main source of support. It also is applied to noncitizens who seek lawful permanent residence, familiarly known as green card status.

The new regulation promulgated by the Department of Homeland Security redefines public charge more broadly than in the past. Starting Feb. 24, it will assess whether a noncitizen receives or is likely to receive one or more certain public benefits for more than 12 months in a 36-month period. Receipt of two benefits in one month, such as food stamps and government-subsidized housing, counts as two months.

Montes said people are confused about who is covered by the new change. He said it does not apply to green card holders, refugees, asylum-seekers, victims of trafficking or domestic violence, and most children. In effect, it applies primarily to people who are applying for green cards or certain nonimmigrant visas.

"Most public benefit programs are not included in the new rule, but the changes are both too scary and not scary enough," Montes said. "They are scary because some people will panic and disenroll from programs to which they are rightfully entitled.

"They are not scary enough," he continued, "because people do not yet realize how accessing services legitimately can be used to discriminate against them in the future by an adjudicator examining their visa case."

Montes said the determination of whether someone will be a public charge will be based on a review of the "totality of circumstances" including age, education, income, employment history, health and certain past public benefits, which will now include cash assistance programs, federally funded non-emergency care paid by Medicaid, the Supplemental Nutrition Assistance Program, known as SNAP, and Section 8 housing assistance."

The ruling is not retroactive. Benefits other than cash assistance and long-term medical care at government expense used before Feb. 24 will not be considered in the public charge determination.

Implementation of the public charge law in the past did not have an effect on most people because the majority of immigrants who applied for permanent residency did not access the programs that could have disqualified them, according to Ella Nimmo. She is the director of community programs and development for Cabrini Immigrant Services.

"The rule change expands the benefits that are included in the calculation and gives more weight to things that most people cannot change, like age, family size, disability and income. The implementation targets low-income people of color," she said.

Montes and Nimmo said confusion about the effect of the rule changes is compounded by questions about how they apply to homes that include people of mixed immigration status and those who access benefits that are not subject to the changes, including supplemental nutrition, school lunches and health clinics.

Montes told the workshop participants that benefits received by citizen children or other family members of a noncitizen do not count toward the determination of public charge, but may contribute to painting a larger picture in a future discussion of "totality of circumstances."

"You have to determine if the new rules apply to you and weigh your own circumstances. Don't disenroll your children from programs that are there for them," he said. Any consideration of dropping a benefit should include when or if a person will apply for permanent residency, he said.

Montes said the rule changes are "worrying because they impact who can access what we think of as the American Dream. They will have the effect of leaving out people who will contribute."

He said his parents emigrated from Honduras and used very few public benefits as they got settled. "My parents' experience is why I am an immigration attorney," Montes said. "Like most immigrants, they were driven to achieve. The idea that people who use public benefits won't be self-sufficient is discriminatory. It's a joke and not based on fact."

Hector Arguinzones, co-founder of Venezuelans and Immigrants Aid, participated in the workshop. He said his group works closely with Cabrini and its clients are concerned about the new rule and wonder how it will affect their visa applications or if they will be punished. "The rules have become more complicated since 2018 and I am hoping to share info from the workshop to clarify doubts and help people to sleep more tranquilly," he said.

Cabrini Immigrant Services provides essential services to immigrants in the spirit of St. Francis Xavier Cabrini, patron of immigrants and founder of the Missionary Sisters of the Sacred Heart of Jesus. The 20-year-old organization is a sponsored ministry of the religious congregation.