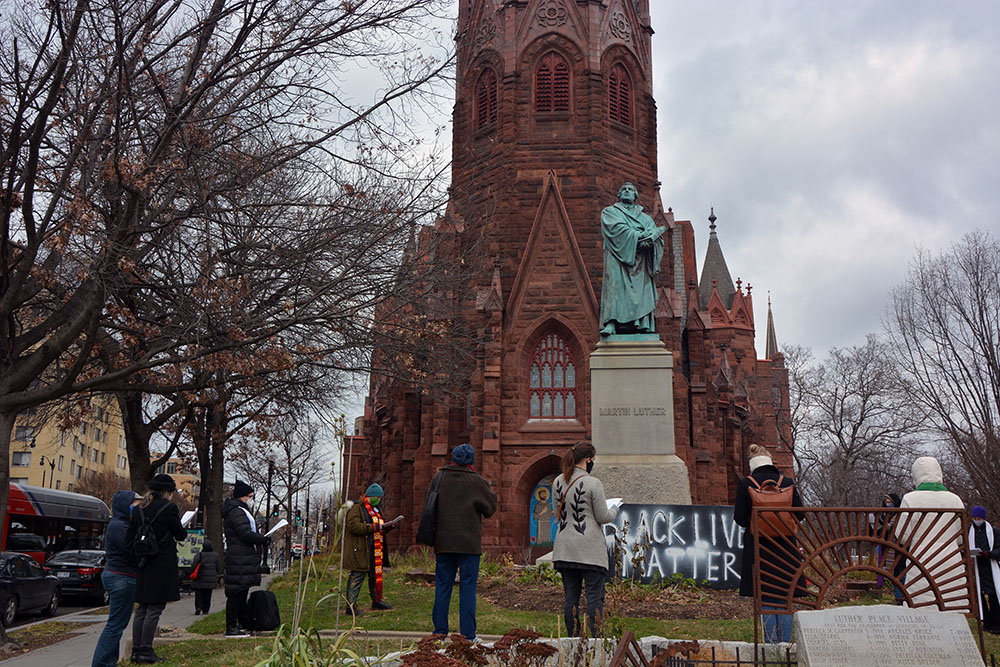 An interfaith group of religious leaders prays outside of Luther Place Memorial Church on Jan 6 in Washington. (RNS/Jack Jenkins)

On Wednesday morning, Jan. 6, an interfaith group of religious leaders gathered outside of Luther Place Memorial Church in the nation's capital. For two hours, the clergy prayed for an end to violence, for an eradication of white nationalism and for a groundswell of racial justice.

Near the end of the service, a gaggle of men adorned in patriotic clothing and "Make America Great Again" hats approached. One walked into the middle of the circle, pretended to fall, and laid on the ground while another man knelt on his neck — an apparent attempt to mock the 2020 killing of George Floyd at the hands of police.

The group then walked across the street — where National City Christian Church had just unfurled a 16-foot Black Lives Matter banner — and repeated the performance in front of cameras.

As the man stood up, grinning, the church's pastor, the Rev. Amy Butler, looked on solemnly, shaking her head.

It was an unsettling beginning to a harrowing day that would culminate with a massive mob of Trump supporters storming the U.S. Capitol as lawmakers attempted to approve the presidential election results, forcing Vice President Mike Pence to flee and members of Congress into hiding. 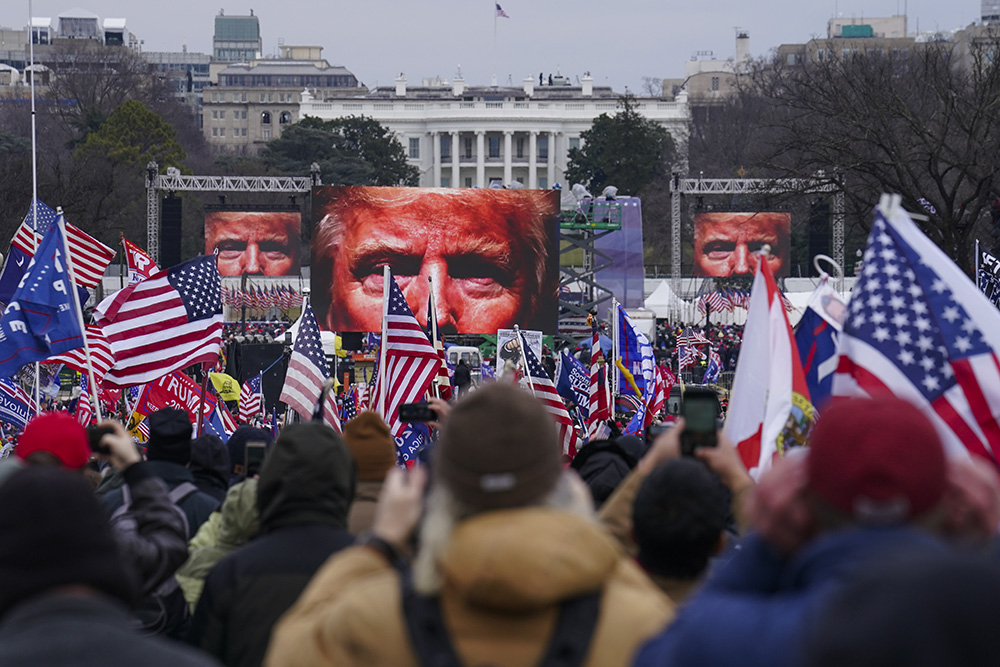 Trump supporters rally Jan. 6 in Washington. As Congress prepared to affirm President-elect Joe Biden's victory, thousands of people gathered to show their support for President Donald Trump and his baseless claims of election fraud. The president addressed the rally on the Ellipse, just south of the White House. (AP Photo/John Minchillo)

It was an unprecedented day that exposed a number of fissures in American society, including two wildly different approaches to faith.

Churches, for instance, were some of the first to offer pushback to the presence of Trump supporters on Wednesday, partly because they were some of the first to face their attacks. When protests broke in the city in December, members of the Proud Boys, which is classified as a hate group by the Southern Poverty Law Center, tore down liberal-leaning banners at four area churches — targeting especially Black Lives Matter signs, one of which they set on fire.

The churches have since responded with the help of law enforcement. Proud Boys leader Enrique Tarrio was arrested in connection to the banner burning when he arrived in Washington on Monday, the same day Metropolitan AME, a historic Black church, filed a lawsuit against him and the Proud Boys for destroying the church's sign.

Among those in attendance at the morning vigil — which plans to continue inside for 24 hours — was the Rev. Leila Ortiz, bishop of the Evangelical Lutheran Church in America's Washington synod. She condemned the notion that Christianity could somehow give license to the kind of violence perpetrated against houses of worship in D.C.

"My hope and my mission is to highlight the humanity and the belovedness of all of God's creation, and this particular violence — this particular permission to be violent — is profoundly disturbing and antichrist," she said. "To proclaim that we are a Christian nation — to proclaim and to support a leader that claims to be Christian while also being so violent and willing to destroy people's communities, lives and bodies — is more than reason to come and protest, and to use prayer as protest."

The Rev. Christopher Lee Zacharias, pastor of Washington's John Wesley AME Zion Church, also had strong words for those who might invoke faith while perpetuating violence.

"The premise for which they stand is false," said Zacharias, who also attended the vigil.

He argued Christianity "in no way, shape or form" supports the "immorality" preached by religious supporters of Proud Boys and others who were amassing a few blocks away to listen to President Donald Trump speak.

Luther Place pastor the Rev. Karen Brau also noted that Wednesday was Epiphany, when many Christians celebrate the biblical story of Magi visiting the infant Jesus — and when King Herod slaughtered innocent children. Christian history, she said, is filled with encounters involving "leaders who are despots," and that believers should seek wisdom so they can live in ways that benefit all.

But those who gathered to support Trump and repeat disproven claims of election fraud appeared undeterred by such theological critiques. As Proud Boys arrived near the U.S. Capitol after Trump's speech, people in attendance reportedly referred to them as "God's warriors." 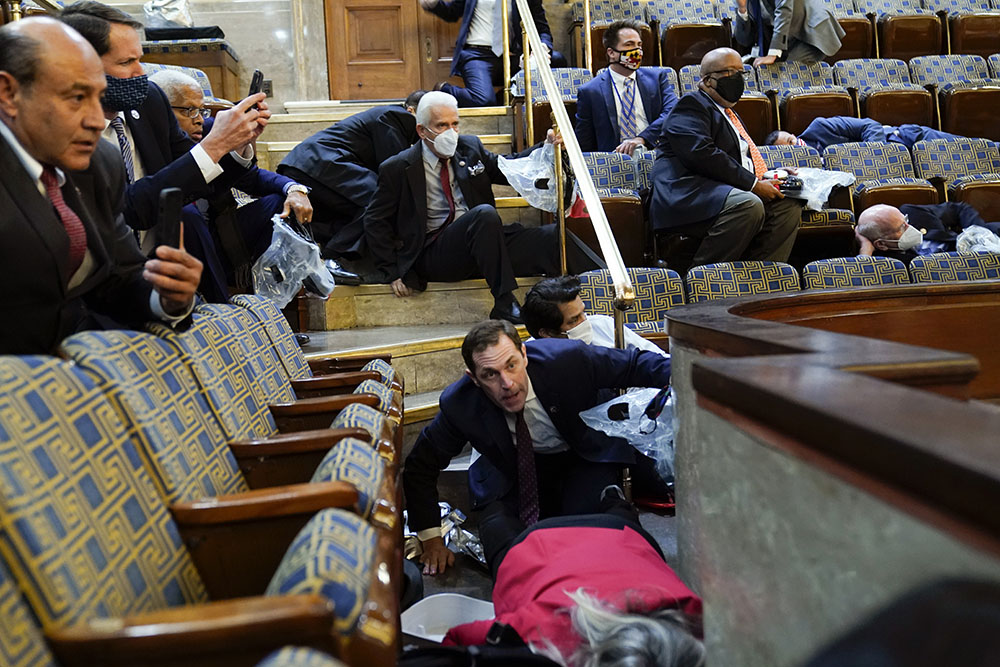 People shelter in the House gallery as protesters try to break into the House chamber at the U.S. Capitol on Jan. 6 in Washington. (AP Photo/Andrew Harnik)

When the mob eventually breached the Capitol and violently stormed into the Senate chamber Wednesday afternoon — sending the Capitol region into lockdown — one insurrectionist could be seen carrying a white flag with a cross in the corner: the "Christian flag."

And after the mob took over the Capitol, some demonstrators unfurled a massive banner outside. It read: "Jesus 2020."

But Jesus was already invoked in Congress that day — albeit with a very different message. As the mob broke into the House chamber, lawmakers crouched in the balcony, desperate to shield themselves from impending attack.

As what sounded like gunshots rang out, a CBS News video caught what appeared to be Rep. Lisa Blunt Rochester offering her own response to the harrowing situation: She led her fellow lawmakers in payer.