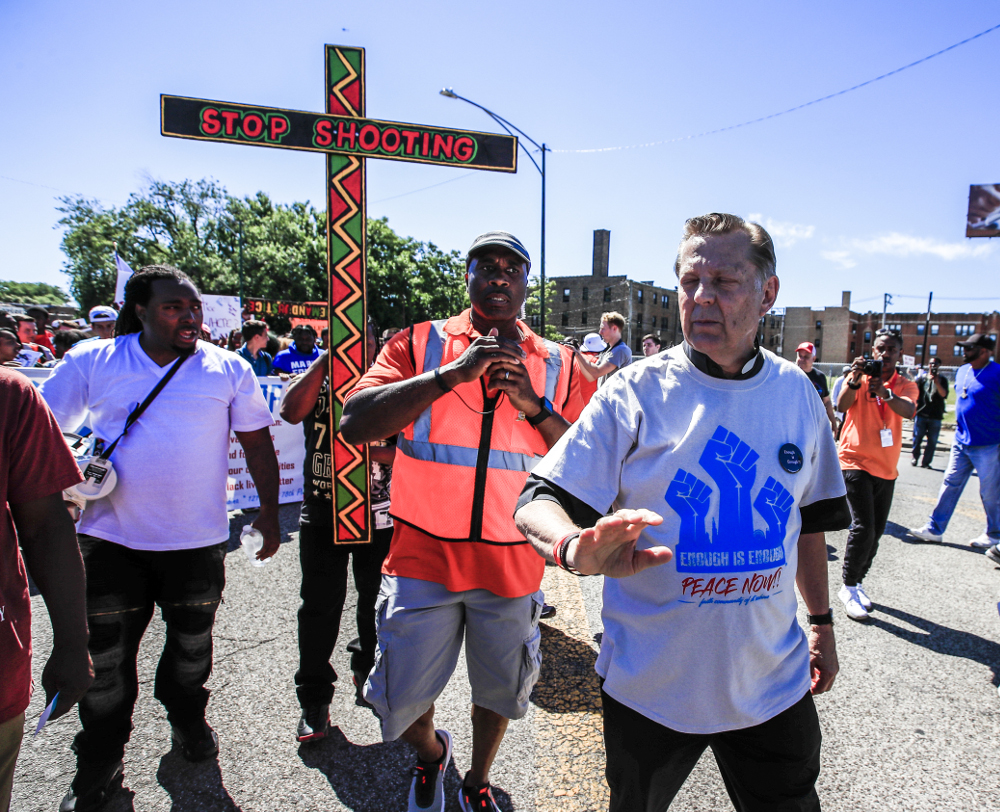 Fr. Michael Pfleger, pastor of St. Sabina Parish in Chicago, leads the "Dan Ryan Shut Down" protest July 7 in Chicago. Pfleger and hundreds of anti-gun activists filled a major Chicago highway for about an hour demanding that city officials do something to stop gun violence in the city. (CNS/Tannen Maury, EPA)

Hundreds of protesters led by Chicago priest Fr. Michael Pfleger and anti-gun activists filled a major Chicago highway for about an hour July 7 demanding that city officials do something to stop gun violence in the city.

The march was preceded by a lot of discussion, right up to march itself, on how much street space the protesters could take. Initially, they were given half of the northbound lanes of the Dan Ryan Expressway, separated by a barrier made up of trucks, emergency vehicles and uniformed officers, but after more negotiations at the scene between Pfleger, the Rev. Jesse Jackson and local police officials, the marchers were given full use of the northbound lanes.

In a statement after the march, Chicago Cardinal Blase Cupich said he was thankful that city and state law enforcement officials cooperated to allow the protest to take place. "Now it is time for all of us, especially our leaders, to take up with vigor the concerns raised by our young people and all those who marched today," he said.

Days before the event, he issued a statement applauding "the courage shown by young people in our city and across the country demanding their right to life and human dignity, given by God and guaranteed by our nation's founders."

"They make us proud. They give us hope," he said.

He also defended what organizers said would be a peaceful demonstration, saying: "History has proven many times that nonviolent action and peaceful protest have the power to create change. The change we need in this moment is to end a culture of violence and indifference. This is a priority we must all embrace and for which we must all work."

There were no arrests during the march, which drew people of all ages and races. A few local Mercy sisters tweeted that they had joined the group. It stopped traffic in the area for hours and fueled a debate on Twitter between Gov. Bruce Rauner and Mayor Rahm Emanuel about how the protest was handled.

When it was over, Pfleger used a bullhorn to tell participants that they did what they came to do — to shut down the street to get attention. "Today was the attention-getter, but now comes the action," he said.

He continued his activism on Twitter, posting that when he was asked to do the march elsewhere he said his parish already marches every Friday night against gun violence.

In looking at next steps, he tweeted that youth activists had "demanded a meeting with the mayor and governor as well as all those running for office to ask for their plan for more jobs, good schools, needed resources."

St. Sabina organized buses to get people to and from the protest also organized by Chicago Strong, a group of students advocating to reduce gun-related deaths, Gather Activism and March for Our Lives Chicago.

This story appears in the Gun Violence feature series. View the full series.
A version of this story appeared in the July 27-Aug 9, 2018 print issue under the headline: Chicago cardinal praises anti-gun march on local highway.